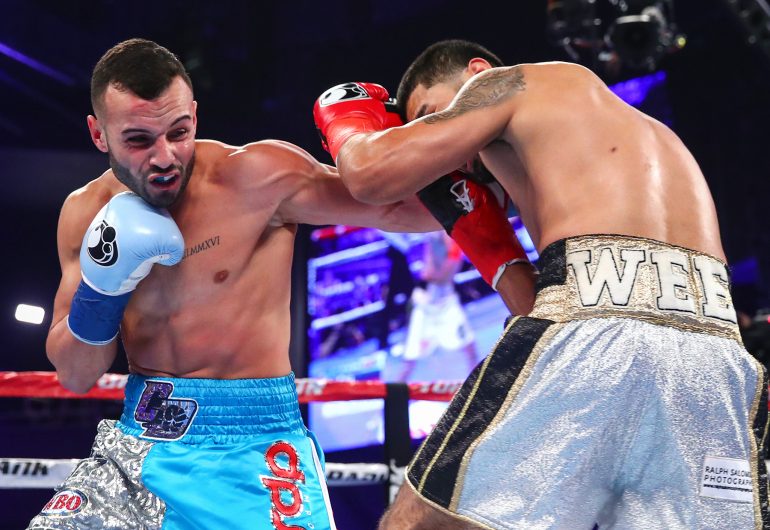 NEW YORK — Felix Verdejo was long celebrated as the next big thing from Puerto Rico, but it just might be another Top Rank prospect who will take the reins now that Miguel Cotto is retired.

Christopher Diaz faced off against Bryant Cruz on Saturday in an ESPN-televised fight from The Theater at Madison Square Garden, and impressed during his short time in the ring.

The Puerto Rico native sharp-shooted his way through Cruz, a late replacement for Casey Ramos, who withdrew for unknown reasons.

Diaz’s left hook produced most of the damaging blows, and there were many. He planted Cruz Cruz (18-3, 9 KOs) on the canvas in Round 1 after a sharp left hook connected on the chin.

Two more knockdowns came in the second, and then in the opening seconds of the Round 3, Cruz was again on the deck, and this time referee Harvey Dock had seen enough, waving it off at the 37-second mark.

“I felt great at my first fight at 130 (pounds), it was the kind of performance I was looking for,” said Diaz (22-0, 14 knockouts). “Now that Miguel Cotto retired, I’m here to stay and become one of the best superstars from Puerto Rico. And I hope to bring happiness to the people from my island after all we went through in Hurricane Maria.”

The 23-year-old formerly competed at featherweight, but he clearly carried his power to the new division. And if he can continue to perform like this on ESPN, he’ll be well on his way to obtaining his goal.

“He’s a good fighter,” Top Rank matchmaker Brad Goodman told RingTV.com. “He’s ready for all the 130-pounders. He wants to fight (Oscar) Valdez for the title when he moves up to 130.”