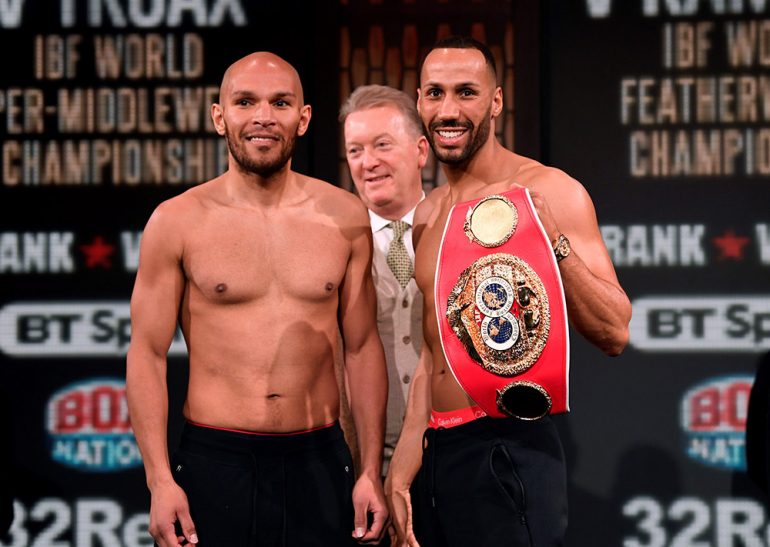 The homecoming that became a horror show.

Unheralded American Caleb Truax stunned heavy favorite James DeGale by 12-round majority decision to lift the IBF super middleweight title at the Copper Box Arena in London on Saturday. One judge scored the bout 114-114, a score which was overruled by tallies of 116-112 and 115-112 in the visitor’s favor.

The fight turned completely in Round 5 when Truax stunned THE RING’s No. 1 super middleweight with a brutal bevy of hooks and uppercuts. The assault cut the defending titleholder over the left eye and produced severe mouth damage, which DeGale had also suffered in his prior outing against Badou Jack.

“I want to thank everyone for the opportunity,” said Truax in an interview with BT Sport in the U.K. “We watched a lot of the Jack fight and noticed that (DeGale) didn’t like pressure. I couldn’t box him; he’s a better boxer than me, so I had to make it into a dogfight.”

Early on, DeGale looked sharp. He switched from his natural southpaw stance to orthodox effortlessly and released some nice single shots to head and body. Truax (29-3-2, 18 knockouts) was on the front foot but his offense seemed limited and he offered nothing that DeGale hadn’t seen before.

However, as the rounds progressed, the challenger’s confidence increased. In the fifth, Truax scored with a solid one-two before pursuing the home fighter into his own corner. The follow-up was brutal. Blood sprayed from DeGale’s face as Truax landed blow after blow.

DeGale (23-2-1, 14 KOs) survived the charge and the bout remained competitive. However, it was noticeable that the home fighter was struggling to throw his right jab. DeGale underwent complex shoulder surgery during the summer and insisted that he was new and improved. That didn’t look to be the case tonight as Truax, who has been stopped twice before, walked him down consistently.

Another big attack by the American in Round 10 produced more damage. The Truax uppercut was a serious weapon and blood poured from DeGale’s face as he sought refuge. The Englishman was brave down the stretch, but one had the feeling that he just hadn’t done enough to retain his title. This is an enormous setback and plans for big fights in 2018 are now in tatters.

“I can’t believe it,” said a clearly dejected DeGale, who had been out of the ring for 11 months. “I thought I won it, but I’ll have to go back to the drawing board and change a few things. There was pain (in the shoulder). If I’m being honest, I’ve maybe rushed back. Maybe I should have waited until next year. I’m gutted but all credit to (Truax).”

Truax weighed in at 167 pounds with DeGale bang on the division limit at 168.