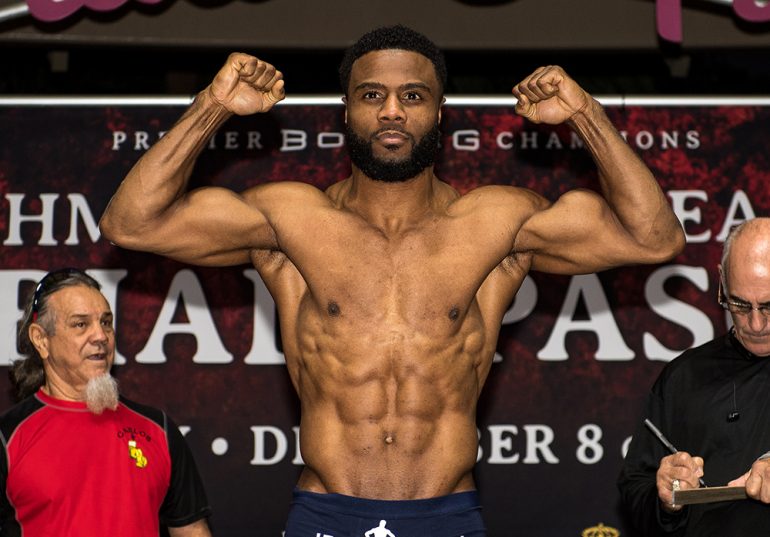 It took a while for Jean Pascal to get down to Miami on Thursday. He had one flight from Canada delayed, then caught another with a brief stopover in Philadelphia. He was supposed to land in Florida by 4 p.m. With the changed plans, he didn’t arrive until around 8.

By 10 p.m., he was in his hotel and on a treadmill. Pascal was taking his fight against Ahmed Elbiali seriously. The 35-year-old former WBC light heavyweight titleholder knew he was handpicked to pad the 27-year-old Elbiali’s record. Pascal vowed this would be his last fight, and it was important to him that he didn’t go out like Miguel Cotto did last week in his farewell fight.

On Friday night, Pascal went out on his own terms. He took the fight to the retreating and seemingly disinterested Elbiali until the younger man’s corner stopped the fight at 2:06 of the sixth in the 10-round, 178-pound catchweight main event on Fox Sports 1.

Elbiali (16-1, 13 knockouts) landed a big right within the first 30 seconds of the fight, which had Pascal covering up and holding. But once Pascal weathered that torrent, Elbiali started to doubt himself. It was if Elbiali threw his entire effort into an early knockout. When that didn’t occur, he had no Plan B and suffered the consequences. After his sluggish start, Pascal (32-5-1, 19 KOs) began to dominate.

Near the end of the second round, Pascal had Elbiali in some trouble. A wide left backed Elbiali up. Pascal then followed him into the ropes and connected with a right to the body and a right to the head amid numerous punches that missed. At the outset of the third, a looping left caught Elbiali on the temple.

Pascal kept connecting with wide shots, while Elbiali wasn’t doing much of anything. Elbiali did land a right inside the halfway point of the third. The question Pascal faced was whether or not he could hold up his furious early pace.

At 2:11 of the fourth, Elbiali took a punishing left hook and appeared stunned for a second. Referee Telis Assimenios warned both fighters in the last 10 seconds of the round to cut out the holding.

In the fifth, Pascal’s pace slowed. But he found a second wind in the last minute, connecting with a right. Halfway through the fight, Pascal looked like he was in firm command. Elbiali had to know he was down on the scorecards.

Pascal began chopping away again at Elbiali in the sixth. With just over a minute left, Pascal hit Elbiali with four consecutive rights. By then, Elbiali’s trainer, Carlos Albuerne, knew his fighter was done and saved him by throwing in the towel.

“It was a beautiful fight,” Pascal said. “I knew it would be my last one and I wanted to make a statement against a young, unbeaten fighter. It went basically as I expected — a couple of difficult moments but I was able to do everything I wanted.

“This is absolutely the last fight of my career. I’ve sold hundreds of thousands of tickets in Canada. I’m very proud of that. People ask if I want to end it here (in Miami) and not Canada, but I am very satisfied with everything I’ve accomplished and to beat an undefeated fighter is a perfect way to end my career.”

In the preceding co-feature, Cuban expatriate Luis Ortiz (28-0, 24 KOs) returned to the ring for the first time since Dec. 10, 2016. “King Kong” was supposed to fight reigning WBC champion Deontay Wilder last month at Barclays Center, though he was scratched from the fight when he tested positive for a banned substance and Wilder fought Bermane Stiverne instead, knocking him out in the first round.

Earlier this week, Ortiz was given the green light by the WBC, which stated that Ortiz’s failed test was the result of a prescribed medication to treat high blood pressure. On Friday night, Ortiz made easy work of 6-foot-7 Daniel Martz (16-6-1, 13 KO) in what was a scheduled 10-rounder. Martz was the sacrificial lamb, his recent losses including a first-round TKO to Joseph Parker and a second-round TKO to Bryant Jennings.

“There’s no need for me to get mad, there is no need for me grunting, or go on social to say anything. I’ve done that before,” Wilder told FS1 broadcaster Ray Flores before the fight. “The pain Stiverne took that night was meant for Luis Ortiz. Now that he’s fighting, I still want Luis Ortiz.

Seconds after dispensing of Martz, more fun ensued. Ortiz stuck his head through the ropes and had some choice words for Wilder, after which Wilder went up and joined Ortiz in the ring.

“I want to fight you,” Ortiz said.

“Stay by the phone, baby,” said Wilder, pointing at Ortiz. “I’ve been wanting you. You messed this opportunity up. I blessed you the first time. I’m going to bless you again.”

“Stay by your phone, Luis Ortiz. I don’t want no excuses,” Wilder said. “No excuses. I am a man of my word. Make sure you train hard because I’m going to bust your ass. I promise you.”

Then Ortiz called a Wilder “a bitch.”

They finally got the two out of the ring for the main event.