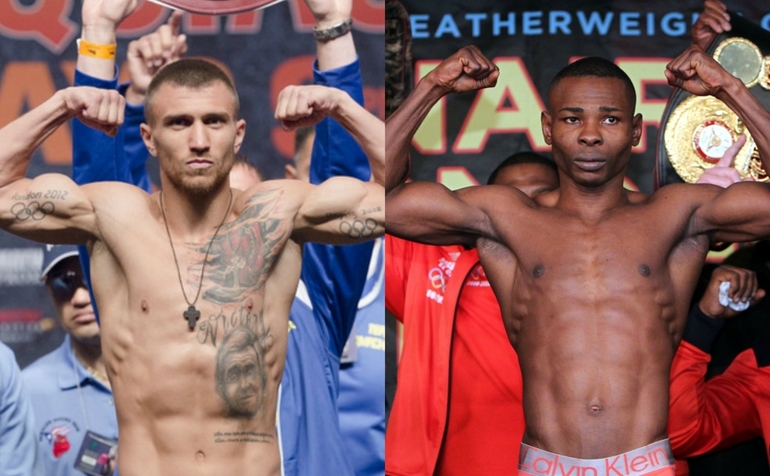 It marks the first time two double Olympic gold medalists have met. Lomachenko won back-to-back gold in 2008 and 2012, while Rigondeaux achieved the feat in 2000 and 2004.

This hotly anticipated bout pairs two supremely gifted southpaws. Since debuting in the fall of 2013, Lomachenko (9-1, 7 knockouts) has already captured world titles in two weight classes. Rigondeaux (17-0, 11 KOs) is a former unified junior featherweight titlist, who has made the audacious choice to jump two divisions for a chance to dethrone boxing’s latest golden boy.

Will Lomachenko continue his rise to pound-for-pound supremacy? Or will the Cuban master cause the sensational upset and prove his doubters wrong?

There is no point in breaking this matchup down from a technical standpoint. Why? Because I’m not qualified to do so. Metaphorically, it would be akin to a capable physics student trying to argue the toss with Stephen Hawking. This is a fight between two extraordinary boxers and their respective talents are otherworldly. It is therefore necessary to simplify things. Rigondeaux is 37 years old (if not older), woefully inactive, jumping two divisions and he hasn’t posted a significant victory since April 2013 (Nonito Donaire). Lomachenko is 29 years old, very active, two divisions larger and he’s been beating, mostly, solid competition while Rigo has been sitting on his hands. It has become fashionable to paint Rigo up as a sympathetic superhero who is untouchable and, at one time, he was. Things have changed, however, and the laws of physiology will come into play. This time, Rigo is in against a bigger man, capable of forcing mistakes and hurting him. Don’t believe the hype: Rigo’s ass is grass and Lomachenko is the lawnmower. One thing I will say, if Rigo makes a fool of me and pulls this off, he’s the best fighter in the world, pound-for-pound. I just don’t think he can do it.

An excellent match up that both really wanted, it’s bragging rights for who is the best amateur of the past two decades and arguably ever. Rigondeaux will be stepping up two divisions and he’s not a big junior featherweight, plus he’s in his late 30s. He’s no longer in his physical prime. I feel for him, he’s been widely castigated, though he’s not really helped himself with some band performances that all but vetoed him at HBO and by former promoter Top Rank. Lomachenko is the apple of everyone’s eye, supremely talented and willing to showcase his otherworldly ability and press fights, looking for stoppage wins. I expect a cagey opening, that will suit the counterpunching skills of the cerebral Rigondeaux but all told, Lomachenko is the bigger, younger man and he’s just as talented. It’s tough to see him not winning.

Rigondeaux has numerous mountains to overcome against Lomachenko: The two weight-class jump, an eight-year age deficit, three inches in height and inactivity. He also won’t enjoy his usual southpaw advantage because Lomachenko is also a lefty. He also won’t have his usually gigantic knowledge gap because Lomachenko is also a two-time gold medalist with hundreds of amateur bouts under his belt. Finally, Rigondeaux will be hitting a man naturally larger than he is and that man also throws tons of punches while Rigondeaux is miserly but precise with his. Bigger, younger, faster, nimbler and just as intelligent — that’s a lethal combination. Rigondeaux’s extraordinary defensive skill will see him through to the latter stages of the fight, but Lomachenko will land enough punches to create the necessary attrition. Maybe this will end in yet another corner stoppage.

Rigo on social media has been talking a helluva game. But wait…weight. He’s trying to jump too high. That weight class isn’t suited to him. He will get broken down by the last three rounds or so, but is wily enough to not get stopped. Hoping that this is too much of a chess match, with more cerebral feats being displayed than physical…I see Loma by UD, a three-point edge.

Lomachenko has shown the ability to box early and work out his opponents before going for the jugular. Rigondeaux will revert to type and be typically Cuban in this bout but will lack the fire power to overcome the Ukrainian. Loma to win on points or by late stoppage.

It’s fascinating on so many levels. Call it boxing’s version of three-dimensional chess. In the end, however, a timeless fundamental figures to be the determining factor. To wit: There’s a reason for weight classes. Guillermo Rigondeaux has advantages, including about a 2.5-inch edge in reach over the taller Lomachenko. But the Cuban is jumping up two divisions, from 122 to 130. It’s a step too far in a fight that will end in the clever Lomachenko winning more with size and strength than his advertised creativity.

This is a purist’s dream fight and while it may not produce fireworks, just seeing two masters of the art squaring off is enough for me. When coming up with a winner, the key factor has to be the place both are at in their careers. Rigo may be past his best, while Lomachenko is likely just entering his prime. Rigo still has some tricks up his sleeve, but I’ll stick with Lomachenko UD12.

A purist’s dream fight, two exceptionally skilled fighters squaring off similar to when Leonard took on Hearns. Lomachenko is a marvelous fighter that arguably is the best around today. Rigondeaux also possess incredible skills so it comes down to a couple on intangibles. Lomachenko will have a huge size and physical advantage. Rigondeaux has fought almost exclusively at 122 and is now jumping up two-weight divisions to 130. Rigondeaux has fought a total of 3 rounds since July of 2016 and when you step into the ring with a guy like Lomachenko that doesn’t bode well for your chances of victory. I see Lomachenko dictating the pace and forcing Rigondeaux to do things he normally isn’t accustomed to. It wouldn’t surprise me if Lomachenko stopped Rigondeaux but nonetheless, I see a clear victory for him.

Rigondeaux is brilliant, but also a bantamweight, perhaps older than his listed age and will fight as he always does – carefully. Lomachenko is a man from the future. He does things never seen before in a boxing ring. He is the younger, bigger fighter and matches Rigondeaux’s talent. I don’t see a way the Cuban can win.

Lomachenko-Rigondeaux is an intriguing fight between two elite pros who were, arguably, the best amateur fighters of all time. Rigondeaux has more experience as a pro. But Lomachenko is a brilliant fighter who seems to learn and grow with each round he fights. In the end, I think that Lomachenko’s youth and size advantages will win the day. I pick Lomachenko by decision. But I would not rule out the possibility that he wins with a late KO.

There are two factors here, Lomachenko is the much more active fighter and I think that Lomachenko is just a little better. It is a matchup of two talented fighters, but the only way I see Rigo winning is by running.

Rigo wins a split decision. His accurate elusive style will be too much for Lomachenko to overcome. Lomachenko will be the aggressor. Both are southpaws. Lomachenko who is the much better puncher will have a difficult time catching him. Very, very entertaining fight and close.

I look at the Loma vs. Rigo fight on paper as a good fight. But then we do not fight fights on paper but in the ring. So with that I think Guillermo Rigondeaux is a very small fighter to being fighting at 130 pounds. He stunk the house out at 118 and 122 with his defensive minded style. He is not a risk taker. You’re going to see a stinky fight where Loma, after a few rounds, figures out Rigondeaux in an ugly chess match type of fight. As the fight progresses you will see a more defensive Rigo and Lomo cruises to an easy decision or late round stoppage.

It’s a great fight with two of the best amateur fighters of all time. Rigo is an unbelievably accurate puncher but for me he doesn’t punch enough for someone as big and as busy as Lomachenko. Loma is my favorite active fighter to watch at the minute and I think his size and work rate wins this fight in around eight or nine rounds.

I think Rigo is a slightly better fighter but making up the difference in weight and age may tilt my opinion to Loma winning. Loma gets tons of credit while Rigo will probably be amongst the most underappreciated fighters in history. In a boxing world where people – unjustly – put little relevance anymore into size and age, it could wind up being exactly that and that makes the difference in the fight. Tough to say, I say Loma late stoppage while he’s possibly behind on the cards. The size and youth may show the later the fight goes.

I’m going for Loma and maybe by stoppage. The easiest thing to mention is the size and that will play a huge factor because even though I feel Rigo is the snappier puncher and probably pound-for-pound the bigger puncher of the two, I feel Loma will be able to absorb some of those shots. Both are artists in the ring and almost impossible to hit clean – Rigo is the most elusive – but where Rigo’s moves are almost always defensive, Loma is always looking to make you miss and make you pay for it. His movements are tighter all around the target thus giving him the opportunity to return fire on your blind side and from angles you can’t and don’t expect. Rigo’s movements are of a bigger arc, with the wide stance and the pivot off the front foot, he goes from his back to the ropes to the center of the ring in one movement, brilliant but harder to be as offensive as Loma. The work ethic of Loma will force Rigo to fire back which I think will be more than willing to do and with that making it a more entertaining fight than people are expecting. But as they say, a good big un always beats a good small one. So Lomachenko a late TKO in around 8-10.

The fact this is the first time two double Olympians have fought each other is fantastic and adds more spice. This may never be repeated in our life time. It’s a mouth-watering fight and if these two boxers were the same size I’d pick Rigondeaux but Lomachenko is too big and just as skilful. Points, unanimous decision Lomachenko.

I think it is a very competitive fight. If Rigo can control the different angles from Lomachenko, I think Rigo can win. They are two good fighters. Technically everybody says the bigger guy will be the winner but in this case – not because I trained him – I think Rigo wins this fight by unanimous decision. I know what Rigo is capable of.

Even when it might look like the perfect match, this could end in a boring fight. Rigondeaux is the fighter that promises a lot of action but never delivers. Lomachenko is always fun to watch. It depends on how much Rigondeaux wants to fight.