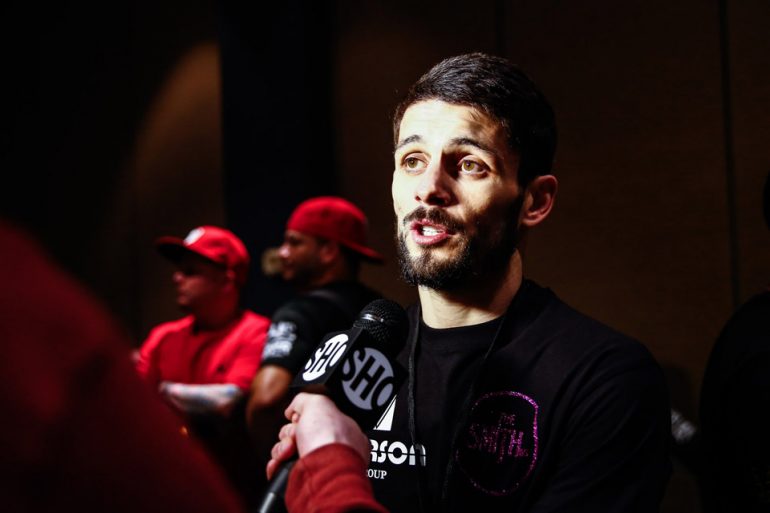 Check that. Would you like to fight Francisco Vargas?

The opponent was finally decided, but British junior lightweight Stephen Smith didn’t really care who was up next, providing it set him on a path towards another world title opportunity.

This Saturday at the Mandalay Bay Events Center in Las Vegas, Smith takes on the battle-hardened Vargas, a former WBC titleholder at 130 pounds. An impressive victory puts the Liverpool, England, native among the top players in a stacked junior lightweight division. Defeat would leave the 32-year-old boxer puncher with limited options.

“What you see is what you get with him,” said Smith in an interview with RingTV.com. “He’s a proper, gutsy, typical Mexican fighter. He’s very good to watch and if you’re paying money as a fan, Vargas is a fighter you want to see. But, obviously, if you’re a boxer, on my side of the ropes, you don’t want to be involved in too many of the hard fights he’s had.

“I’ve got to use my own boxing ability, which I believe is my strongest asset. I can be tough and I can fight, but it’s not all about that. If you can make a fight easy, you’re best doing it and if I can do something to negate his offense and bring in my offense, then it could be a very good fight for me stylistically.”

The blueprint on how to defeat Vargas was laid out by his countryman Miguel Berchelt earlier this year. Many expected that matchup to be a fire fight, but Berchelt replaced fire with finesse and subtly defused the veteran on route to an 11th round stoppage.

But while Vargas is coming off a loss, Smith, who dropped unanimous decisions to Jose Pedraza (then-IBF titleholder) and Jason Sosa in 2016, could be in pole position for another world title fight, should he prevail against the Mexican warrior.

“Vargas is highly ranked with two governing bodies, which is no surprise given that he was world champion up until January of this year,” said Smith. “Beating Vargas should earn me another world title shot, but this isn’t an eliminator or anything. I just hope that beating a name like him will put me in position to fight one of the world champions.

“The way the card is set out, it’s a big platform for me. It’s an HBO card in Las Vegas and that’s a big reason why I took the fight. I just think this opens doors for me.”

On the same night that Smith and Vargas are mixing it up on the West Coast, two of the finest pound-for-pound fighters in the world will be going at it on the East Coast.

Vasyl Lomachenko will defend his WBO 130-pound title against Guillermo Rigondeaux at The Theatre at Madison Square Garden in a showdown which has been brewing for years. Smith went from fight mode to fan mode as soon as the matchup was mentioned.

“I’m a massive fan of both,” he said. “They’re frighteningly good, so talented and it’s an exceptional fight. Two Olympic gold medalists going at it, it’s never happened before. The quality on show is going to be brilliant.

“I wouldn’t rule out any result, but Lomachenko is the younger and fresher man. I also think the size will play a factor because Lomachenko is naturally bigger. Rigondeaux has the skills to go through the weights, but he’s a natural (junior featherweight). Lomachenko has been calling out (Jorge) Linares and (Mikey) Garcia, so he’s on the way up to lightweight. It’s a great fight on paper but I favor Lomachenko slightly.”

This Saturday, it is all about the junior lightweights.