Vasyl Lomachenko’s move to lightweight a matter of when, not if 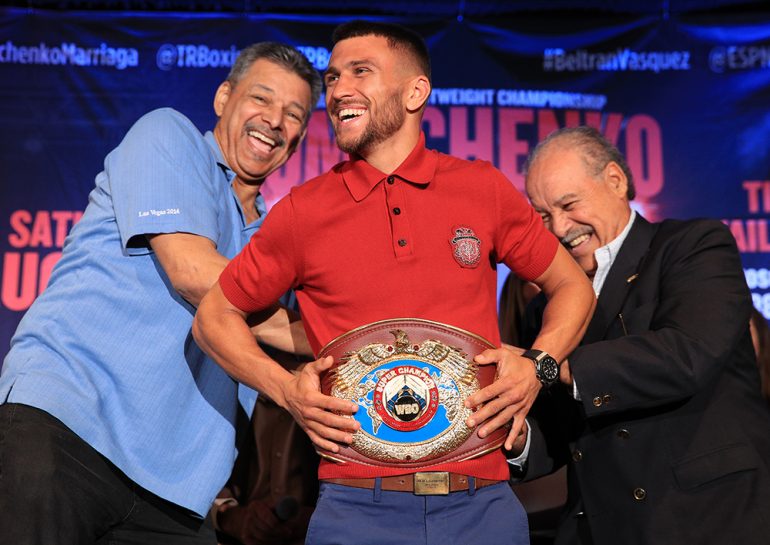 OXNARD, Calif. — Vasyl Lomachenko has a huge assignment on his hands Saturday.

He’ll defend his junior lightweight title against fellow two-time Olympic gold medalist Guillermo Rigondeaux, and if he wins, he’ll cement his status as one of the five best boxers in the world regardless of weight.

After that, Lomachenko has designs on solidifying that status further. He started his career at 126 pounds, but soon, he’ll be climbing another weight division.

When the Ukrainian does move up, many attractive matchups await, but none more so than a meeting with Mikey Garcia.

Garcia has looked fantastic at 135 pounds since he ended a long hiatus from the ring. The little brother of Robert Garcia scored one of the year’s best knockouts against Dejan Zlaticanin in January to win the title.

Garcia’s bitter feud with Top Rank ended with him leaving the company, which could complicate any fight with Lomachenko. Top Rank president Todd duBoef even tore into Garcia earlier this year when the potential fight was mentioned.

But for Lomachenko it would be huge. He’s already won titles in two weight classes and now regularly headlines on HBO. And he acknowledged such a fight could usher in his entrance to pay-per-view.

“For me, it’s a very interesting fight,” Lomachenko said. “In boxing history, we need to make this fight.”

But for now, he’s focused on one man: Guillermo Rigondeaux, whom he meets in New York this weekend.