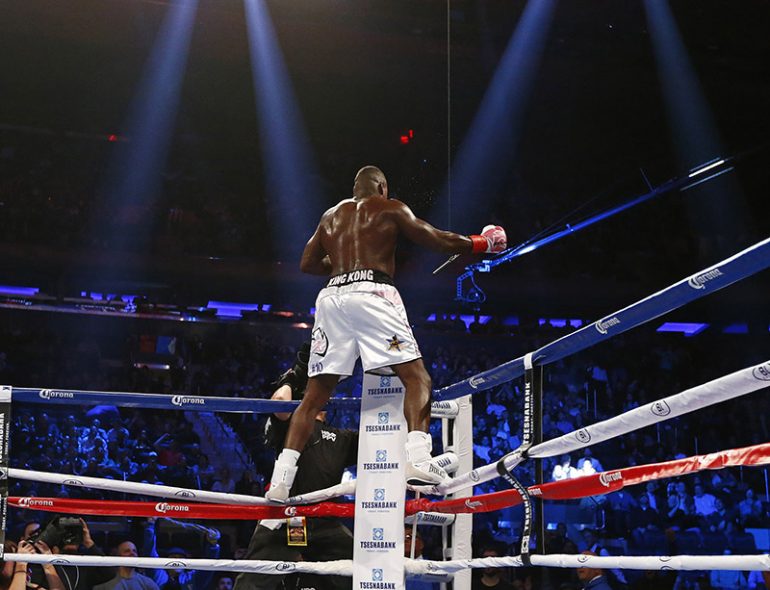 Luis Ortiz's climb through the heavyweight ranks has been soured by failed drug tests. (Photo by Rich Schultz/AP)
05
Dec
by Mike Coppinger

Luis Ortiz is wasting no time continuing his career.

The heavyweight contender was found with banned substances in his system prior to his scheduled title shot against Deontay Wilder, and as a result, the bout was scrapped.

The 38-year-old was cleared by the WBC last week after the organization found he had reason to take those substances to control high blood pressure, and now he’s free to fight again.

He returns Friday against Daniel Martz on a PBC on FS1 card.

“I’m just thankful to be back in the sport I love so much,” said Ortiz (27-0, 23 knockouts). “I can’t wait to get some action and feel that ring and those gloves tight on my wrist. I’d like to thank everyone, especially my loyal fans, who stood by me and supported me through this rough time.

“I don’t think it would have been possible without you guys. I’d like to thank the WBC and Mr. Sulaiman for being humane enough to take time for their investigation, and my entire team who never lost faith in me. But most of all I need to thank God because without him there wouldn’t be anything worth living for.”

The Cuba native now resides in Miami, Florida, so Friday’s outing in Hialeah Park will be a homecoming of sorts.

Martz (16-5-1, KOs), a journeyman from West Virginia, has faced Joseph Parker and Bryant Jennings, but didn’t see the third round of either fight. He’s unlikely to last long here, either, the perfect foil to ensure Ortiz looks good in his return.

There’s no doubting Ortiz’s talent. Now, with the drug ban behind him, he’s gearing up for a run in 2018.