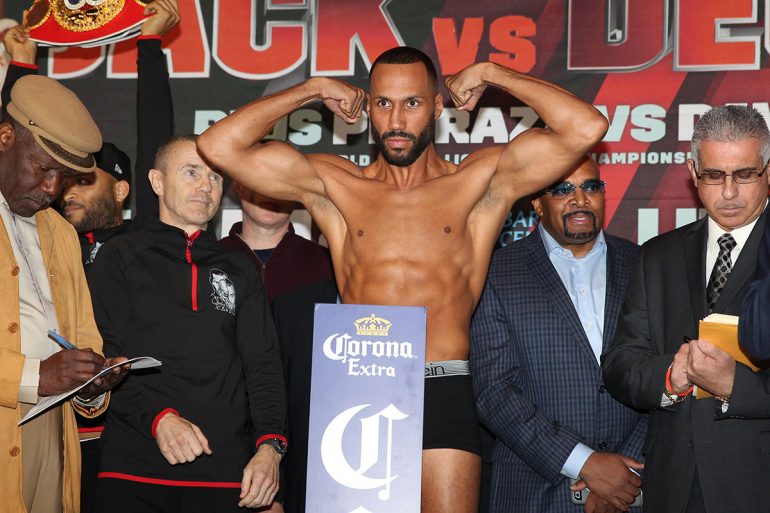 James DeGale returns from shoulder surgery on Saturday against Caleb Truax, but after the stay-busy fight is out of the way, he’s gunning for another unification fight.

Chunky hasn’t competed since a bout with Badou Jack that would have netted the Brit a second super middleweight title. The matchup ended in a draw, though, and the brutal affair sidelined DeGale until now.

There’s also someone he has in mind.

“David Benavidez next year is the plan,” DeGale (23-1-1, 14 knockouts), an Olympic gold medalist, said on the BoxNation Podcast. “I spoke to Al Haymon and asked if he could make that fight. He said ‘James, that is the plan.’ As soon as I’ve dealt with Truax the first stop in 2018 is Benavidez.

Benavidez scraped by Ronald Gavril in September, and they’ll rematch in early 2018. Before then, DeGale’s return bout against Truax will be streamed live by Showtime on social media platforms and on YouTube. The American doesn’t figure to trouble DeGale, but it’s a reasonable fight following a serious injury.

Many of the other top 168-pounders — like countrymen George Groves and Chris Eubank Jr. — are tied up in the World Boxing Super Series until the summer. They’ll actually square off in the semifinals on February 17 with a title on the line.

So come fall time, DeGale, THE RING’s No. 1 super middleweight, could find himself fighting the winner of Groves-Eubank with three titles on the line.