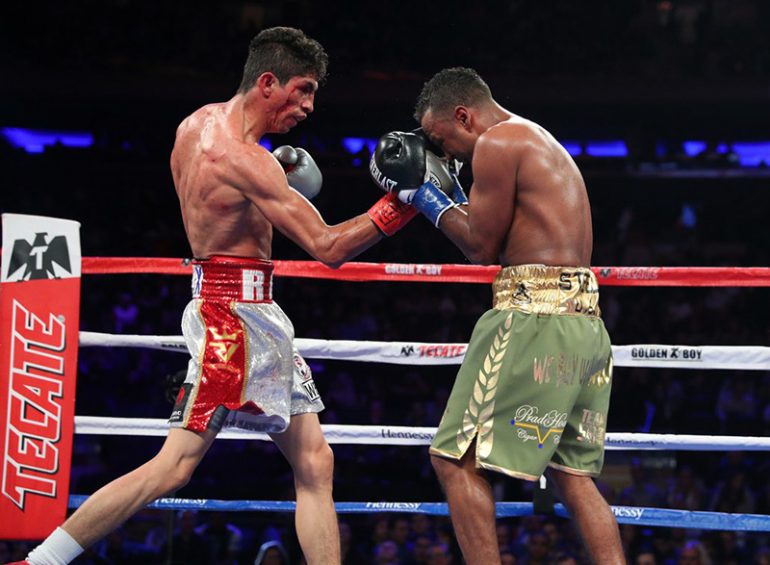 NEW YORK — Other than two cuts that are the stuff of a fighter’s nightmare, it wasn’t too bad of a night for Rey Vargas.

The WBC junior featherweight titleholder made his second title defense with a bloody unanimous decision over gutsy brawler Oscar Negrete on Saturday at Madison Square Garden to open the Miguel Cotto-Sadam Ali card on HBO. The scores were 119-109 on two cards and 120-108 on the third, all for the 27-year-old Vargas of Mexico City.

It was an uneventful performance for the rangy Vargas (31-0, 22 knockouts) for the first half of the fight, as he innovated combos on the fly against the shorter, aggressive Negrete (17-1, 7 KOs) with a style reminiscent of Manuel “Mantecas” Medina. The fight got a sudden injection of drama in the seventh and eighth rounds, as two gaping wounds were opened up above each of Vargas’ eyes by a pair of accidental headbutts.

The cuts brought confidence to Negrete, a Colombian now based in Los Angeles, but Vargas showed that he had a few tricks at his disposal even as his vision was compromised, turning Negrete into the ropes and wacking him in the mouth with a right hand before opening up a combination.

Any opening Negrete had was gone by the championship rounds as he motioned to his left shoulder in the corner, complaining of soreness following a one-sided paint job in the eleventh.

The New York exposure will raise Vargas’ profile in a division where pound-for-pound entrant Guillermo Rigondeaux holds the WBA title, and Jessie Magdaleno, the division’s number 2 contender, is the WBO titleholder. Vargas is rated number 3 while the IBF titleholder Ryosuke Iwasa of Japan is rated eighth.