Samuel ‘The Tsunami’ Teah has been to hell and back 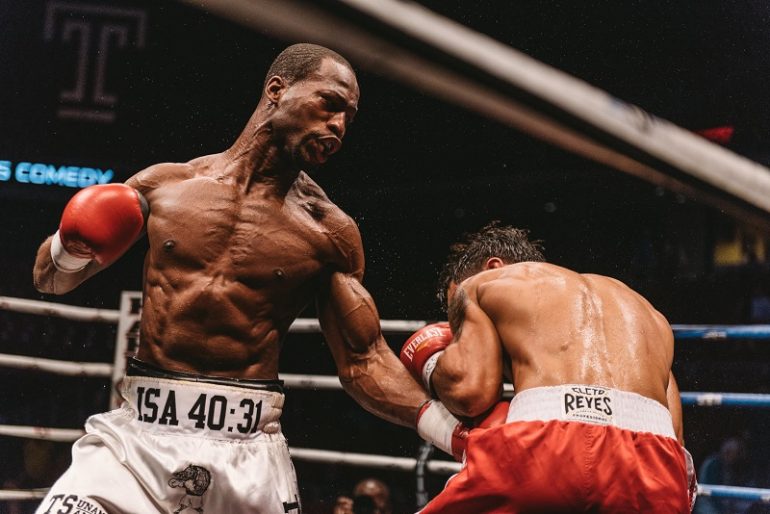 PHILADELPHIA, PENNSYLVANIA – The TV woke him up like it usually did each morning at exactly 4:30 a.m., so he could run. Samuel Teah lifted the pile of covers he was under and his body quivered from the brutal late-December cold. He took a quick peek at the news and faintly heard about a family of six that was wiped out by a house fire the previous night, as he staggered to his feet and wavered to the bathroom. The tragedy coming from the screen included an 18-month-old child and there was no smoke detector in the home.

A twinge of sadness overcame Teah for a moment, then he returned to his world of doing whatever came next, like brushing his teeth.

As he was walking to the bathroom, Teah noticed how his brother Eliott’s bedroom door was exactly how he left it the day before. That was unusual, Teah thought. Pieces of news came streaming forward, cause enough for Teah to stop brushing and listen more intently.

Information started to register. The fire was in Southwest Philadelphia, on the same block where his mother lived. He heard the family that was killed was Liberian. He’s from Liberia. Teah immediately called his father, who just finished working an overnight shift, and asked if his mother’s house had a smoke detector. His father didn’t know. Samuel tried calling his mother. No answer. His brother. No answer. His sister. No answer. In a frenzy, he drove to his mother’s and, as he approached the block, fire trucks from the preceding night were still on the street.

The realization hit. A visceral gut tug forced Teah to pull by the side of the street, then cry.

The family that perished in the fire was his.

Tonight at the SugarHouse Casino in Philadelphia, the 30-year-old Teah (11-1-1, 5 knockouts) will climb into the ring for a scheduled six-round junior welterweight fight against Maynard Allison (9-2, 6 KOs). Six numbers will be stitched on the back of Teah’s trunks, “12-26-08.” Teah is asked frequently what the numbers mean. He tells them that’s the date his family was killed in a fire, taking away Vivian Teah, 26, Eliott Teah, 24, Jennifer Teah, 17, 18-month-old Zyhire Wright-Teah, his nephew, along with nieces Ramere Dosso, 8, and Mariam Dosso, 6, and 54-year-old family friend Henry Gbokoloi.

Vivian and Eliott were with Samuel in 1992 when they escaped the bombs and bullets flying in Monrovia, Liberia, during the first Liberian civil war. They straddled their father’s back, as he carried them to safety, with explosions pounding the city in the background from then-President Charles Taylor’s rebel forces. Now this, a kerosene heater explosion in the basement that razed a three-story brick duplex in Southwest Philly. Samuel’s mother got out and three others survived.

The explosions caught up to part of the Teah family halfway around the world.

Samuel lives with it every single day. He was supposed to be there in that house. An argument with his mother, as he was driving there, changed his mind. He often thinks divine providence may have had something to do with why he is alive today. The strength to put boxing gloves on and get into the ring is a victory in itself. He could have despaired. He could be bitter. He could hate the world. 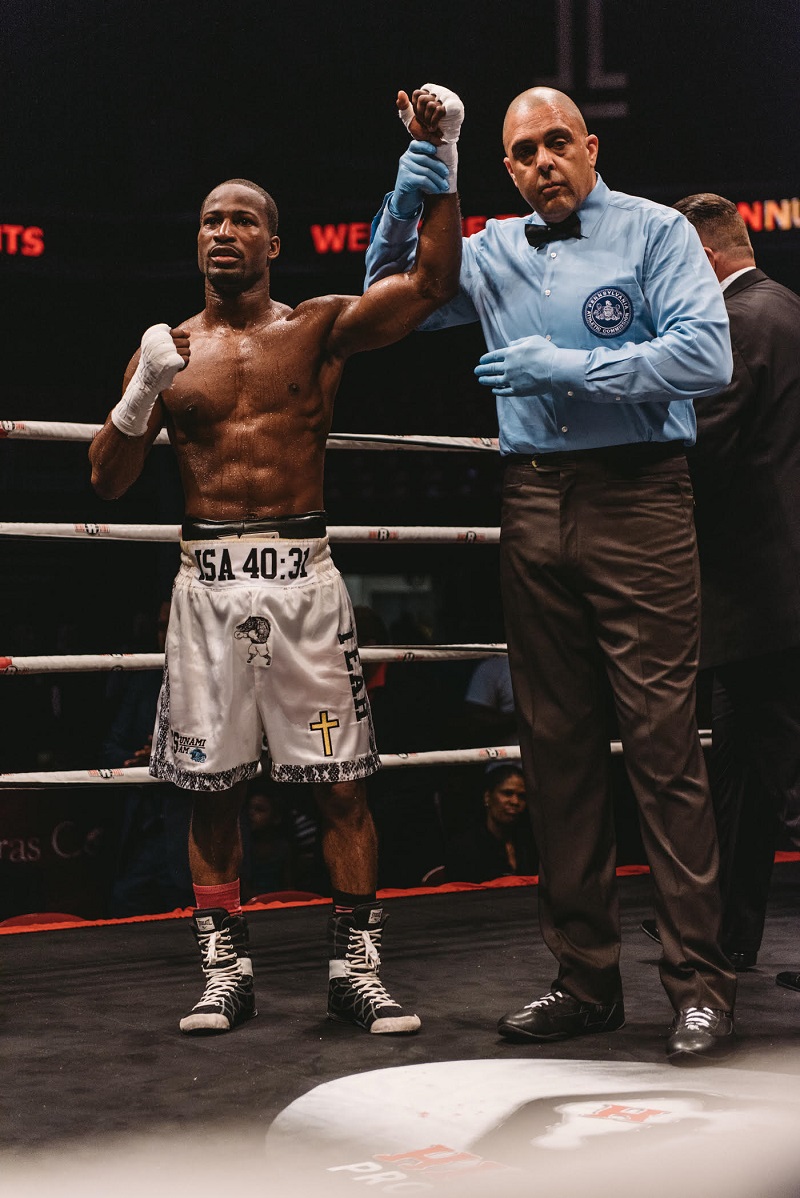 “I dedicate every fight to my family and to Eliott, who was going to train me and were set to run the morning I found out they were killed in the fire,” Samuel says. “Eliott was a workout fanatic. He was sculpted. He took pride in working out. It’s funny because he came to the gym one day and we actually fought. I beat him down and I was punching him on the floor.

“It’s one of the last memories I have of him because we were laughing afterwards. I always wanted to beat my big brother up. It was exhilarating to do that; he knew it. He was always smiling. He was always a laid-back type of guy. He was a warm person. I was supposed to be in that house.”

What got Samuel through this tragedy was his faith. That was forged during his formative years in Liberia. Teah managed to survive the onslaught. He was a child and bombs going off and bullets whizzing become indelible elements in a young child’s consciousness and on toward adulthood.

“You never forget that, never,” Teah said. “Some people don’t remember things when they’re that young but I do. We hid for a time; I don’t remember how long that was for. There were people running all over the place. It’s still very vivid in my mind. I recently saw a movie about it that brought back a lot of old memories. When the rebels came around, they captured young kids and put AK-47s in their hands. That could have been me. If I was captured, and I was young enough, they would have put a gun in my hands.

“I don’t know if I would even be here if I was captured. But I do remember getting out and escaping to Ghana, where my grandparents lived. I was nine when we arrived in New York. My parents separated but my father always lived in Philly. That’s what brought me to Philadelphia. When you live through a war as a kid, you never forget it.”

Maybe it explains why Teah fights the way he does. He’s relentless, a whirlwind with boundless energy. He says his style has nothing to do with his past. Those who know him tend to think otherwise after they’ve gotten to know Samuel. There is a certain fury in how he fights. He was 19 when he started boxing. There was a chance in 2012 that he was going to represent Liberia in the Olympics. Nothing ever materialized, though he did have a chance to return to his home country. He even went back to check out his home in Monrovia, still riddled with bullet holes that were just being patched up over 15 years after the fighting stopped.

“Sam’s remarkable,” said Manny Rivera, one of the principals of Hard Hitting Promotions, which is running the Philadelphia show tonight. “Sam is so positive about everything; he’s amazing. When people go through what Sam did, you would understand why they would hate everything. Sam doesn’t. I knew about Sam’s story for a long time, through other boxing people in the area.

“We have a lot in common. I lost a child when she was a baby. What impressed me about Sam, when I got to really know him, was his ability to pick himself up. He’s really an inspiration to people. He’s an outstanding man who holds two or three jobs, plus he fights professionally. He’s never angry and that tells me God has to be working through him. He has to be. Sam encourages me to always look at things in a positive way. He lost his whole family. I lost my 18-month-old daughter a year-and-a-half ago. I do what I do to make my daughter proud. It gives you a drive.”

In the ring is Teah’s moment to let go and let everything out.

It’s why Teah calls himself “Tsunami.” He hardly ever steps back during a fight. He’s a fighter who believes in the old mantra: My best-versus-your best. So far, Teah’s best has won 11 of 13 bouts.

“I used to be called ‘African booty-scratcher’ and kids made fun of my accent when I arrived in New York,” recalled Teah, who works as an armed security guard while he builds his boxing career. “I used to get into a lot of fights. Boxing came naturally to me. My faith in God got me through the tough times. It makes you a fighter.”

And only a fighter could survive what Teah has.