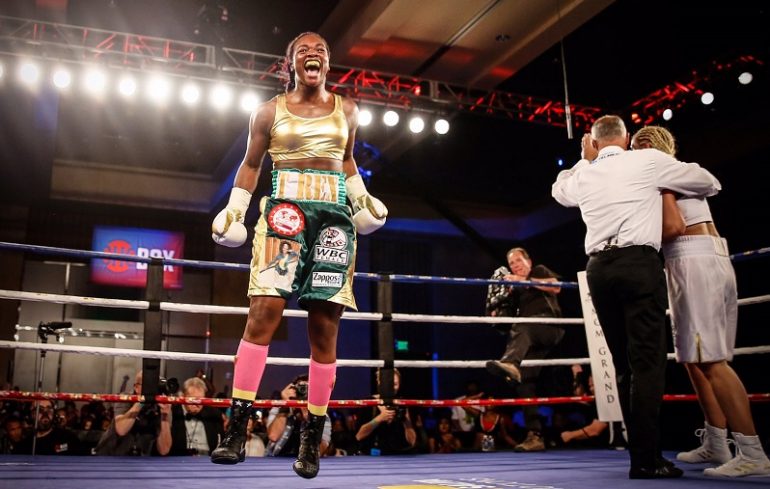 2018 will be a pivotal year for women’s boxing in the U.S. Claressa Shields leads the pack, arguably, with her Olympic pedigree, those two gold medals heavy in her pocket.

The Michigan-based boxer is promoted by Dmitriy Salita and advised by ex-HBO executive Mark Taffet; she next gloves up on January 12 and her rise up the ranks has been about as quick as one might expect; maybe, one saw her talent stand out on the international scene before turning pro.

The 22-year-old Shields, the IBF/WBC female super middleweight titlist, debuted in November of 2016 and has been stepping up the skills ladder in opposition. That’s not a given in this sphere, being there isn’t a talent pool in the women’s game comparable to the men’s. She took down a 16-0 pugilist, Nikki Adler, in her most recent outing, last August, and is in against another unbeaten boxer, come the New Year. Tori Nelson (17-0-3, 2 knockouts) most recently gloved up in November, besting Latashia Burton. Burton came in 4-9, though, so Shields has to be favored entering the contest, which will be shown on the Showtime platform.

The push to build buzz around Shields has been deftly handled by Taffet and Salita, who also promotes heavyweight contender Jarrell “Big Baby” Miller, himself on the cusp of getting a title crack. You likely know that women are more accepted and are more of a draw on the mixed martial arts scene. Indeed, some of the U.S. boxing talent has been drifting toward the cages and Octagons, to get some of the revenue that spills from the MMA coffers. Heather Hardy and, now, Amanda Serrano are now more excited about mixed martial arts because of the payoff potential. But Shields is old-school and wants to conquer the Sweet Science. However there’s no reason she can’t work off the energy in the MMA room. To that end, on Thursday, she hobnobbed with some female UFCers in Detroit, where the UFC is running a show on Saturday. UFC 218 is a PPV event, with Max Holloway taking on Jose Aldo in a rematch tango. The next big UFC event unfolds Saturday, December 30 in Nevada, with UFC Women’s Featherweight Champion Cris Cyborg facing Holly Holm, who came to MMA from the boxing sphere. 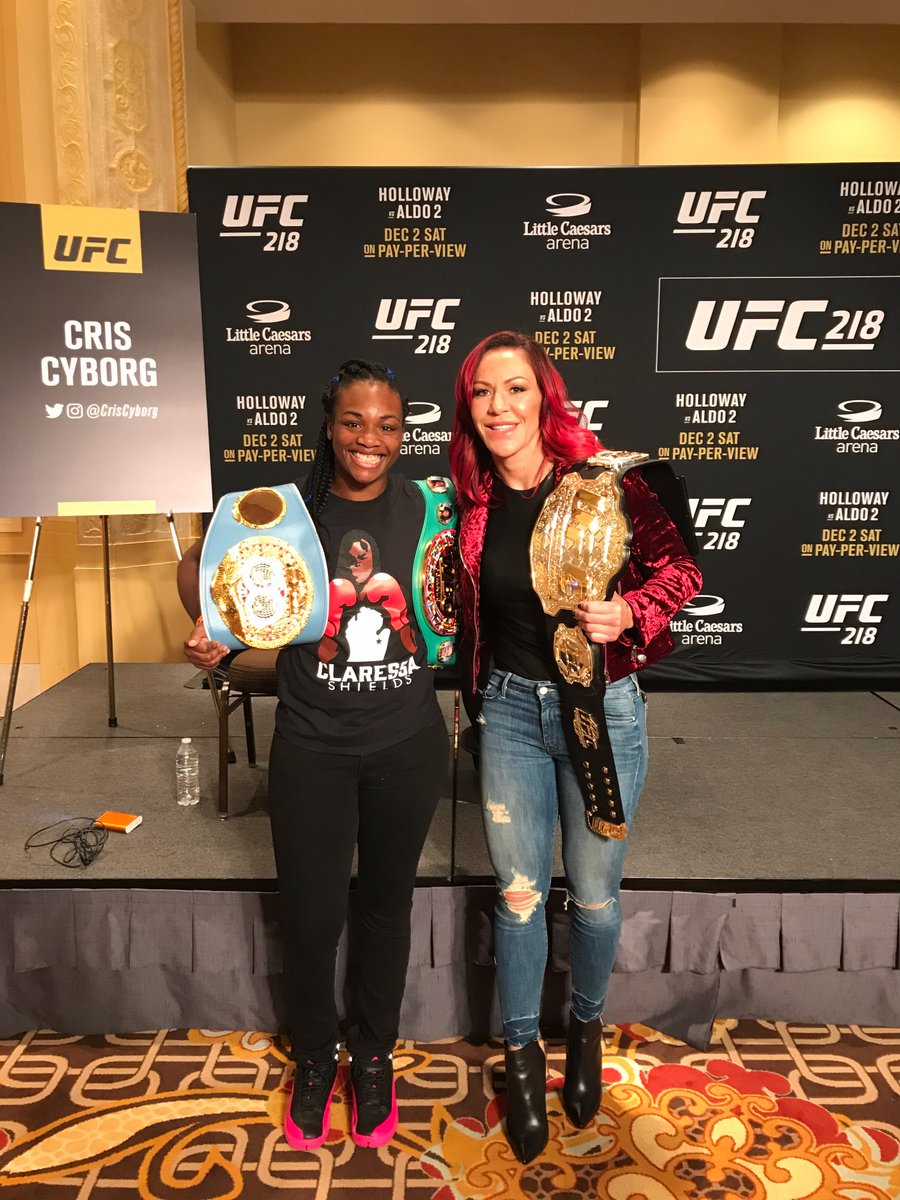 Cyborg (20-1 in MMA) and Holm (33-3-2, 9 KOs, in boxing, last boxed pro in 2013) hit the UFC event on Thursday and Cyborg and Shields chatted, said Salita. “Cyborg and Claressa are friends that trained together and this was a great opportunity for them to meet and connect with local and national press. Cyborg was at MGM Detroit in August when Claressa won her world title,” he said. 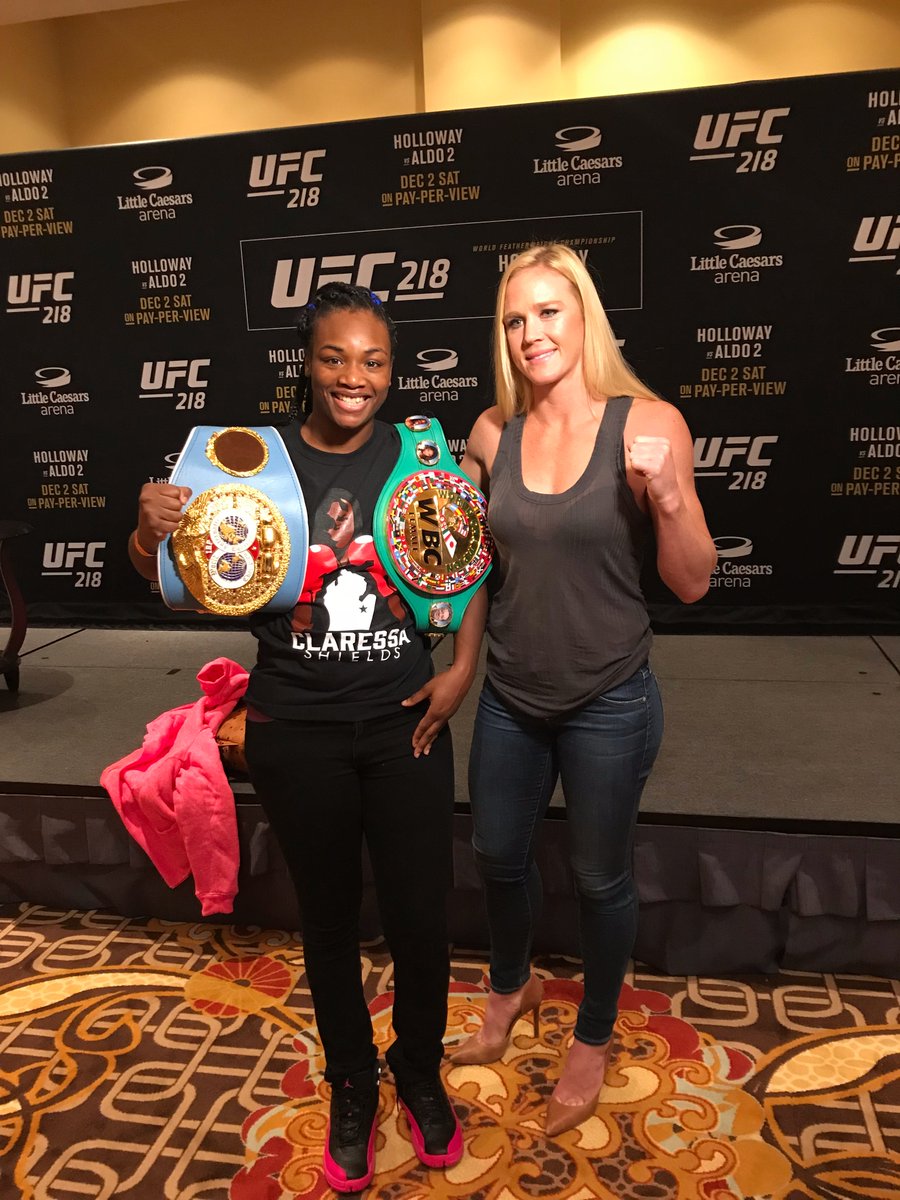 Shields shared about the meet-and-greet, “Today at the presser, my thoughts were how awesome it was to be in the room with two great female athletes. And just to see how much women’s combat sports have grown over the years.” Shields and Cyborg trained together some this summer. “They stay in touch and have a very good relationship,” Salita told me.

“My relationship with Cris Cyborg is like a best friend,” Shields said. “We are so cool! It’s like we both accept that we are badasses in the ring but, then, outside the ring, we are women, sweet and funny. Really supporters of each other!”

But…might Shields start feeling like she’s not invited to the best bash…and maybe try to slide over to the MMA scene someday?

My three cents: I so hope that women’s boxing in the U.S. continues to make strides and narrows the gap with women’s MMA and their buzz-worthiness. Shields is the odds-on favorite to win the first Boxing Writers Association of America Women’s Boxing Fighter of the Year Award and could be the focal point, as the women’s scene mushrooms. Until then, getting some marketing love from the sector where women are already rocking, in MMA, is not stupid at all.