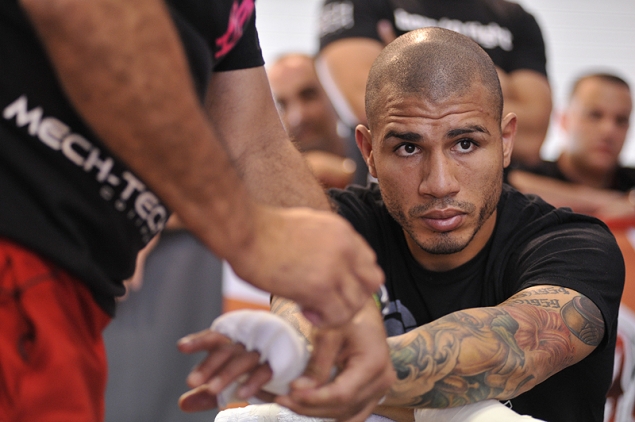 Miguel Cotto is leaving boxing on his terms - on top of his game, financially secure and with the respect and admiration of his peers and fans.
30
Nov
by Wallace Matthews

NEW YORK, N.Y. — Measured against the great boxers of his ancestral home, Miguel Cotto never had the explosive punching power of Wilfredo (Bazooka) Gomez, the dazzling smile and devastating left hook of Felix (Tito) Trinidad, the quicksilver elusiveness of Wilfredo Benitez or the fluidity, grace and flamboyance of Hector (Macho) Camacho.

And measured against the great welterweights and junior middleweights of his era, Cotto’s record is dotted with losses to the best of them: Floyd Mayweather Jr., Manny Pacquiao, Canelo Alvarez and in their first bout, the tainted Antonio Margarito. 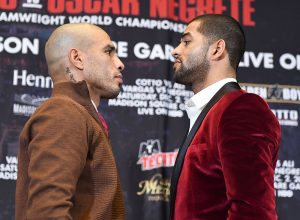 But as Cotto heads into his farewell bout against Sadam Ali in Madison Square Garden, the arena that became his adopted home, on Saturday night, he takes with him a legacy that many of the above-named fighters would envy.

In a sport that routinely devours its greats through attrition, politics and sheer brutality, Miguel Cotto is one of the rare examples of a fighter who walks away with his money, his marbles and his dignity intact.
And that is the greatest victory that any professional boxer can achieve.

“He could go on a lot further if he wanted to,’’ said Freddie Roach, Cotto’s trainer since 2013. “He’s not washed up. He’s not all done. But the thing is, he’s done everything correctly. He’s saved his money, he’s got his health and he wants to spend more time with his family. To go out on top like that is a dream come true for everybody.’’

This is not to say that Cotto’s career has not had its share of great moments. The masterful decision over 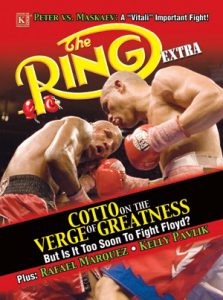 a still-formidable Shane Mosley at the Garden in 2007, the stoppage of Zab Judah a few months earlier, the “satisfying’’ – Cotto’s word – KO of Margarito in their 2011 rematch and probably most of all, the impressive KO of the previously-unbeaten Ricardo Torres back in 2005, a victory Cotto had to climb off the canvas to achieve, stand out in an exemplary 16-year professional career.

Plus, what Cotto has meant to the Puerto Rican boxing community – his career was just getting started as Trinidad’s was winding down beginning with Tito’s loss to Bernard Hopkins in 2001 – and to boxing at Madison Square Garden, where he fought nine sold-out title bouts, can hardly be overstated.

And nothing that happens in the ring against Ali, who was 12 years old when Cotto made his pro debut against Jason Doucet (a first-round KO) in Austin, Texas on Feb. 23, 2001, can tarnish that legacy.

Cotto may not have been the best welterweight of his era – he considers the welterweight Cotto the best Cotto — or the greatest fighter to have come off the island of Puerto Rico (he was actually born in Providence, Rhode Island, and moved with his family to Caguas at two years old) but considering his career and life as a unified entity, may be among the most successful.

“Having in mind what I’ve accomplished in boxing, and most importantly what I bring to my family, I had an outstanding career,’’ he said to a small group of reporters before Thursday’s final pre-fight news conference. “I believe that I had a brilliant career because I was able to provide the best world possible for them. Miguel as a father, Miguel as a friend, Miguel as a husband, Miguel as a person, that’s going to be my legacy.’’ 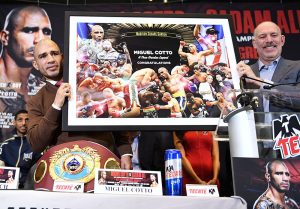 It was a rare moment of introspection and emotion from a fighter whose public persona has often been deadly serious and even forbidding. Cotto showed even more cracks in the façade later when he choked up briefly at the podium.

But that is what happens to athletes, especially great athletes, who recognize that the end is near. And even though Roach believes Cotto is still capable of fighting at an elite level – he called Wednesday’s final workout “probably the best day we’ve had so far’’ – he agrees that once a fighter sees the finish line, it’s time to give up the race.

‘’If he starts thinking about those things, then he’s made the right decision,’’ Roach said. “I wish I had when it was my time.’’

It was revealing that in a 20-minute sitdown with three boxing writers who Cotto knows well, the conversation never once turned to Ali, 28-year-old with a 25-1 record for whom this fight is the chance of a lifetime.

Instead, Cotto preferred to talk about his wife and four children, about the devastation wrought by Hurricane Maria on his beloved Puerto Rico, and most of all, about his late father, Miguel Sr., who taught a 22-year-old Miguel Jr. a valuable lesson.

Two days after Miguel Jr. beat Joshua Smith in in February 2002 in his first fight after suffering a serious shoulder injury in a car accident, Miguel Sr. roused his son out of bed and ordered him to get dressed. “We are going to go somewhere,’’ he said. “I will tell you where when we get there.’’

He took his son to a bank, where he had him open a joint account from which no money could be withdrawn without his father’s approval.

“He told me that in my first year as a professional, I had showed him I was not able to save money, and he was not going to let me throw away the future of my kids or his grandchildren,’’ Cotto said. “At the time, I was so mad. But today, all I can do for my dad is thank him. I’m so thankful because of him, because he had the courage to step in front of me and tell me what I needed to hear, no matter if I like it or not. And because of that, I am the man I am right now.’’

As a result of his father’s imposed discipline, as well as some wise investments, Cotto says he and his family are financially secure, and he will not be tempted to return to the ring as so many have out of economic desperation.

“I don’t need money,’’ he said. “Now, it’s time for me to be with my family. I know that I lost a lot of good moments, good times with them. Special dates. But I did it because I was working for them. The only thing I care about now is the future of my kids.’’

The relationship between Cotto and Roach got off to a rocky start when Cotto was fighting Pacquiao and the two exchanged harsh words at the weigh-in.

“He told me good luck,’’ Cotto recalled. “And I said to him, not in a nice way, ‘I don’t need any luck.’’’
As a result, when Cotto called Roach to ask him to become his trainer, Roach at first thought he was being pranked. “Is this really you?,’’ he asked. 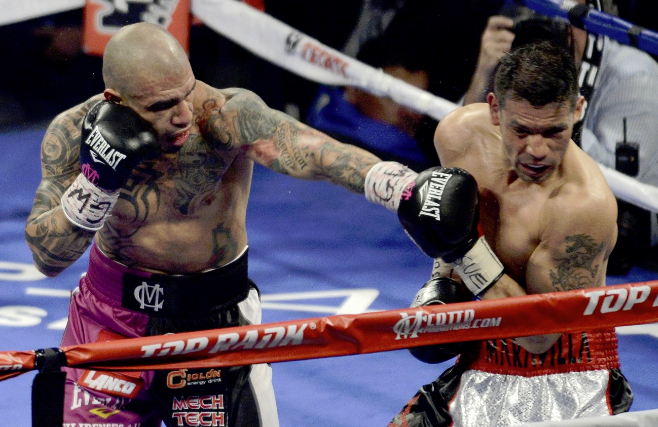 It was, and in the five fights they have worked together, Cotto has won four, including one of his best victories, the 2014 stoppage of Sergio Martinez. Roach also worked the corner the night Cotto lost a decision to Alvarez in 2015.

“Before we got together, I was the biggest critic that Freddie had,’’ Cotto said. “Because he had Parkinson’s and I didn’t understand why a guy with this condition would take a pair of mitts and put them on the hands and work 20, 30 rounds every day with boxers. But since 2013, I can see why Freddie is Freddie. He is the first one to arrive at the gym and the last one to leave. He does it with passion. He does it from his heart.’’

“I think he’s one of the greatest fighters of his generation,’’ Roach said of Cotto. “He’s never ducked anybody and he’s beat a lot of great fighters. He’s very comfortable with me and I’m really comfortable with him. We had a very good training camp. He looks on fire, because he is ready for this fight. He’s not taking the fight lightly. He’s in a must-win situation because nobody wants to go out losing. And we will win this fight.’’

Everything is in place for the Miguel Cotto Story to have a happy ending. The arena will be familiar, the ring will feel comfortable and even though Ali was born in Brooklyn and still lives just a subway ride from the Garden, the crowd will undoubtedly be all for Cotto.

“I think it’s going to be a great night, an outstanding night,’’ Cotto said. “I know at the end of the night it’s going to be kind of sad for me. Maybe even emotional. But I’m going to try to control myself. And after that all I want to do is enjoy my family be the kind of father boxing didn’t let me be.’’
That may turn out to be Miguel Cotto’s greatest victory of all.