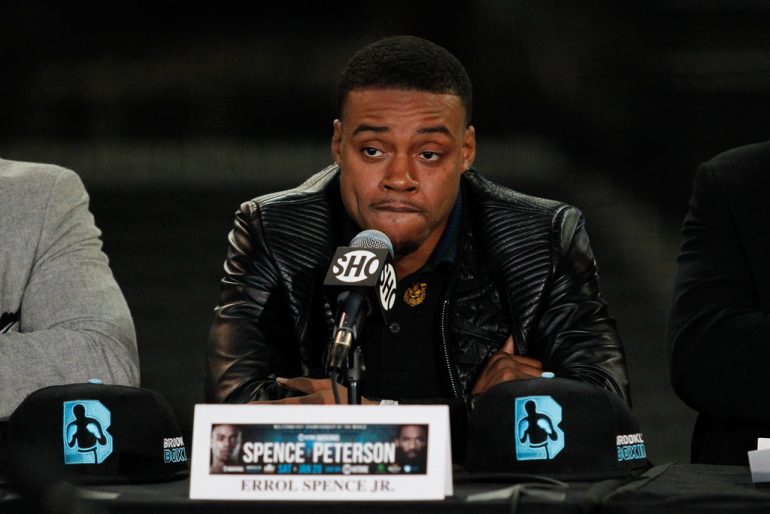 Errol Spence Jr. just might be the best talent in boxing and he’s already had immense expectations placed on his shoulders at age 27.

After representing the United States in the 2012 Olympics, he quickly rose through the ranks at welterweight and showed he was clearly the best fighter from the team.

In his first title challenge, all he did was travel across the pond and battered Kell Brook so badly that the Brit’s suffered a broken orbital bone once again.

Now that Spence (22-0, 19 knockouts) is preparing for his first title defense, a January 20 fight against Lamont Peterson in New York on Showtime, the Texan isn’t shying away from what’s expected of him. He sees in himself what everyone envisions for him.

“My goal is to be undisputed welterweight champion, win as many titles as I can and be the face of the sport,” Spence said on a conference call Wednesday. “I want to be the best fighter in the sport.”

To stay grounded, Spence says he doesn’t “dwell on what I’ve accomplished.” In fact, he’s picked up his IBF welterweight belt just twice since his May victory over Brook.

Once, to bring it for a media appearance at a local news station in Texas. And then Wednesday for his news conference to promote his fight with Peterson.

That’s because he has far bigger goals.

After he gets past Peterson, he hopes to meet Keith Thurman in the fall in a fight for three 147-pound titles. By that time, the fourth belt should be around the waist of Terence Crawford, who is slated to challenge Jeff Horn in the spring.

Yeah, that could be a real superfight if it’s built correctly.