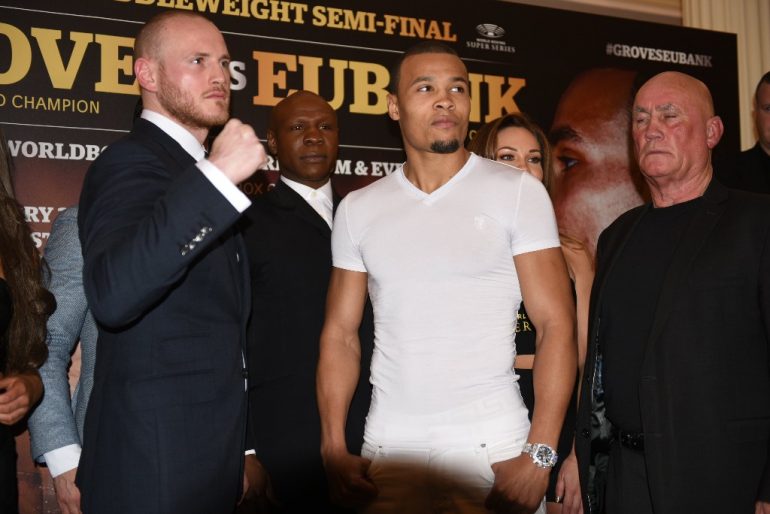 The World Boxing Super Series got off to a fantastic start, but arguably the most intriguing matchup of this elimination tournament to date is just around the corner.

On February 17, George Groves, the WBA super middleweight titleholder, will square off against enigmatic countryman Chris Eubank Jr. at the Manchester Arena in Manchester, England, in a fight that most experts believe cannot fail to dazzle.

Last month, Groves made his way into the semi-final with a fourth-round knockout of Jamie Cox, while Eubank turned back the challenge of Avni Yildirim in three.

“The hype behind this fight will be huge,” said Groves at Tuesday’s press conference in London. “I hope the fight justifies it. On paper, this is billed as a 50-50 fight, with Eubank Jr. maybe even being made the favorite. But I don’t really understand that.

“I think the form, the history, the experience, the ability all lie in my favor and I’m looking forward to a big night. It’s a semi-final in a tournament I expect to win so it’s a stepping stone; another step on the way for me.

“Chris Eubank Jr. puts on a façade that he’s able to do everything himself; that he’s a one-man band. But it’s very difficult doing stuff on your own, so we’ll see if he starts to make changes and adapt. He’ll have to. Obviously, this is his first really big fight, definitely at super middleweight, and I believe that he is going to fall short in a lot of categories.”

Groves, who is rated No. 3 by THE RING at 168 pounds, does have a significant edge in experience. The “Saint” had two massive world title showdowns with fellow Englishman Carl Froch in 2013 and 2014. He lost both by stoppage, but Groves (27-3, 20 knockouts) has been privy to the big fight atmosphere and made up for those setbacks by stopping former titleholder Fedor Chudinov for the vacant WBA belt in May.

Eubank, who is rated No. 6 by THE RING, has enjoyed most of his success at middleweight. In November 2014, the charismatic boxer-puncher challenged then-British, Commonwealth and European champion Billy Joe Saunders, but despite an impressive late charge, he dropped a 12-round split decision. However, Eubank (26-1, 20 KOs) has settled well at super middleweight and is oozing confidence.

“I’ve had many big fights but this is probably the biggest in terms of profile and the tournament and the hype,” he said. “But at the end of the day I always rise to the occasion. The bigger the fight the better I perform.

“George seems to be hung up on what I’ll do. He needs to worry about himself. Thinking about me isn’t going to get him anywhere. I’m a man of my word and George, you will not see the end of the 12th round.

“He doesn’t have the speed, his defense is poor and his stamina is average at best. The fact that he’s lacking in those things means he won’t be able to compete with me. I’m not a stepping stone. I’m Mount Everest and you’re not going to climb me.”

The winner will meet either unbeaten contender Callum Smith or former light heavyweight titleholder Juergen Braehmer. That semi-final is still to be officially scheduled.