Sadam Ali: ‘This is a huge opportunity for me to fight against a legend’ 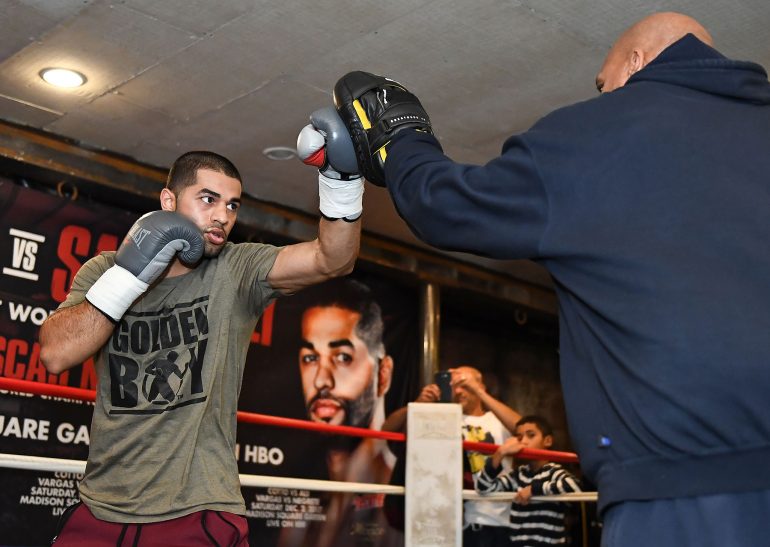 BROOKLYN, N.Y. — Saturday night, Sadam Ali will be like the one obnoxious guest at a party that everyone hopes will drown in the punch bowl.

This is nothing personal against Ali, of course, who is a most personable young man.

But Saturday’s party at Madison Square Garden is planned as a celebration of Miguel Cotto and Ali is the only guy in the house capable of ruining it.

Ali, who is ostensibly challenging Cotto for the WBO junior middleweight title in the 12-round main event – but more likely was chosen to give Cotto a smooth ride into the sunset in his farewell bout — is most assuredly the party of the second part in this one.

Although he’s Brooklyn-born and raised, trains in his own gym in the basement of a Bedford-Stuyvesant brownstone and has fought numerous times at the Barclays Center, Ali will be a stranger in a strange land when he ventures across the East River to meet Cotto at the Garden, which has become his home turf. 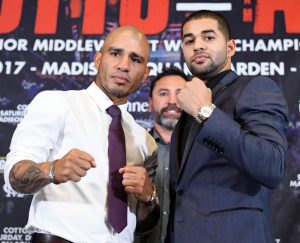 Of the Puerto Rico-born Cotto’s 46 pro fights, 13 have been in New York City – home to an estimated 1.5 million Puerto Ricans, or nearly five times the population of San Juan — and nine at Madison Square Garden, including four on the weekend of the city’s giant Puerto Rican Day Parade. Cotto has even served as the parade’s Grand Marshal, and to the city’s large Boricua contingent, he is as much a hero as Tito Trinidad was 10 years ago, or Jose Torres was in the 1960s.

Consequently, with the Garden expected to be sold out, or close to it, it is likely Ali will hear nothing but boos when he steps into the ring.

“Yeah, of course, I expect that,’’ Ali said after a workout on Tuesday, four days before the fight. “You’re going against a legend, Miguel Cotto, in his last fight. So, most of the attention is on him. Most of the fans, even in my hometown, they’re going to be for him. So, it’s going to be a little different. But at the end of the day, I look at it as, stay focused on the big picture, which is being in the ring and doing the right thing. Do whatever you got to, to win.’’

Still, in addition to the physical training it takes to prepare for a championship bout, Ali must also prepare for the emotional blow of fighting in front of what is likely to be a hostile crowd, just a subway ride away from his home in the Canarsie section of Brooklyn. 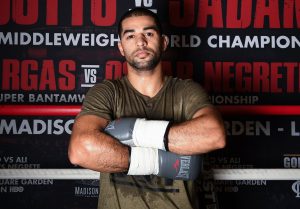 “I don’t think it will bother me,’’ he said. “When you’re focused, things like that don’t really affect you. People can boo all they want. I been booed before.’’

Instead, Ali prefers to focus on the history of relatively young and unheralded opponents who have sent boxing legends into less-than-happy retirements. Joey Archer did it to Sugar Ray Robinson in 1965. Trevor Berbick did it to Muhammad Ali in 1981.

And it was less than a year ago that 27-year-old Joe Smith Jr., a light-heavyweight with an undistinguished 22-1 record, was chosen to give Bernard Hopkins a lovely parting gift at the end of a great career, turned the tables on “The Executioner”, knocking the 51-year-old clear out of the ring in scoring a shocking upset KO.

Ali is aware of the history but brushes aside any talk of wanting to spoil Cotto’s night merely for the sake of it. “My intention is to go out there and look great and, God willing, shock the world,’’ he said. “I don’t really have any bad intent to bring his legacy down. I just want to shine.’’

But it is just as true that fighters with one foot planted in retirement also often have taken one giant step in the direction of a defeat, and at 37 Cotto, who has lost three of his last seven bouts – to elite fighters Floyd Mayweather Jr. Austin Trout and Canelo Alvarez – may be ripe for the taking.

“He’s still strong. That definitely hasn’t went away,’’ Ali said. “But he moves a little bit more than he used to move. He’s not as aggressive as he used to be. But I think he can turn that up when he wants to at any point. So, I’m prepared for anything.’’

Ali (25-1, 14 KOs) has won three fights since suffering a ninth-round stoppage defeat to Jessie Vargas in 2016, a fight he said taught him not to take anything for granted.

“I made mistakes in there that I shouldn’t have made,’’ he said. I might not have trained as hard as I should have. I wasn’t focused. Everything was handed to me to that point and I didn’t really work for it. I won’t make those mistakes again.’’ 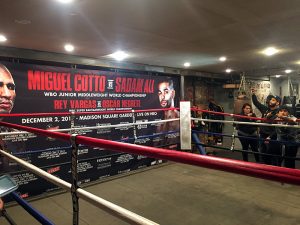 Indeed, it’s not every fighter whose father would build him his own gym in the basement of a family-owned building, with an apartment upstairs for the fighter to live in while training, as Daniel Ali did for Sadam a couple of years ago. The place is snug – just enough room for a floor-level ring, a half-dozen heavy bags and two speed bag platforms – but secure and private, with no distractions.

“I call this spot my little cave,’’ Ali said. “It’s got everything I need here.’’

On Saturday night, what Ali will need most of all is the ability to forget who he’s fighting and why so many of the people watching want so badly for him to win. At the same time, he must remember that the fighter across from him may be older and looking forward to an easier lifestyle, but for one night at least, he could still be very dangerous.

“Of course there’s a danger of underestimating him, but there’s that same danger in every fight,’’ Ali said. “So, I’m going in there expecting to see Cotto at his best. If I plan to win, you got to think that way.’’

Above all, Sadam Ali must remember that in boxing, there’s nothing wrong with being the bad guy at another guy’s party.

“This is a huge opportunity for me to be able to fight against a legend, a guy I grew up watching,’’ he said. “I’ve been to a few of his fights and I met him once and he’s a cool dude. I understand that the night is about him but he’s what’s in front of me and he has what could be mine.