Is Floyd Mayweather Jr. plotting yet another comeback? 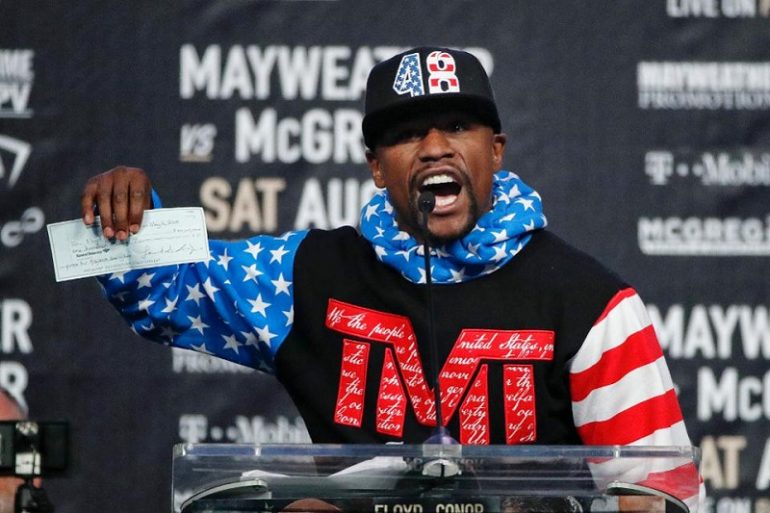 Floyd Mayweather left the sport after stopping Ricky Hatton in 2007 . . . then left the sport again after beating Andre Berto in 2015 . . . and then “retired” after beating Conor McGregor on Aug. 26. Do ya sense a pattern? If you don’t, you may wish to apply for a disability check because your powers of perception are so poor as to render you unfit for employment.

The current carrot on the stick being waved in front of our face is a riff on a TMZ report. That’s the spot for Floyd to drop info to get the masses chattering.

“Floyd Mayweather has been telling people close to him that he’s considering a 51st fight – and he’s been training like a maniac in the gym. But we’re told there has been NO official movement . . . yet. Here’s the deal . . . people close to Floyd say he’s still in fighting shape and ready to go. He even posted video training in his Vegas gym. We’re told he’s been kicking around the idea of another comeback.”

Gentlemen and ladies, start your engines, rev up the chatter machine. Who might he face if he wants to “un-retire?”

My theory is that this is a trial balloon, to help him assess the market. Who could he challenge and make the best bang for the buck? That chatter, the speculation distillation, will help him decide.

One name that seems to be leading the pack now is Gennady Golovkin, who is the man’s man at middleweight. He’s 35 and looked like a later model “Terminator” in his last two outings. He’s an A-grade fighter, but against Danny Jacobs and Canelo Alvarez, the judges were required. Golovkin couldn’t rock those babies to sleep. Maybe Floyd thinks the time is right; that GGG is ripe to be picked off?

GGG’s promoter Tom Loeffler was asked about Floyd coming back, and maybe against GGG, who is in talks to do a rematch with Alvarez in 2018.

“I haven’t heard Floyd talk of a GGG fight,” Loeffler said to me.

Maybe it’s a trial balloon, to get a sense of what the masses might pay for? “I doubt he ever fights GGG,” Loeffler said. “Too risky. But he does like talking about how he would beat GGG.”

Showtime Sports boss Stephen Espinoza would be among the first to know if and when, let’s go with WHEN, Floyd comes back.

“I don’t think so,” Espinoza told TMZ. “You know, Floyd seems pretty happy retired. I don’t think we’ll see him in the ring again. It’s Floyd’s call, but I haven’t heard anything from him that makes it seem like he’s thinking about McGregor or anything else.”

Abel Sanchez, now in France with fighters Michel Soro and Arsen Goulamirian, was asked about comeback chatter, and Floyd vs. GGG. “I haven’t heard, but it’s just like Floyd to step in front of a proposed event, could be messing with the rematch, interesting,” Sanchez told me.

“I think Floyd likes to talk to keep himself relevant, but in the past, he has been quoted as saying ‘GGG is an easy fight’, so who knows. Tom Loeffler and the Hermann brothers (Oleg and Max, managers) are the ones with that headache of trying to figure him out.”