Sergey Kovalev aims for March 3 return in NYC, all he needs is a dance partner 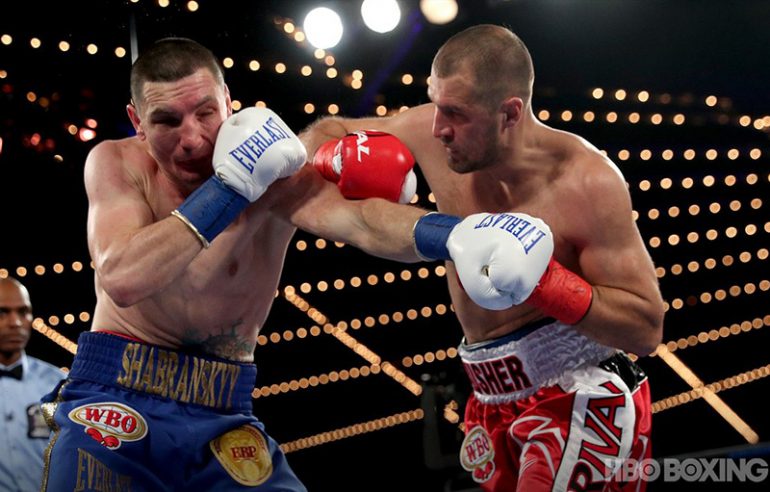 Kovalev connects with one of many right crosses during his two-round stoppage of Vyacheslav Shabranskyy on Nov. 25. Photo / @HBOBoxing
26
Nov
by Michael Woods

His face had not a single nick or scratch on it after he engaged on Saturday night in the Madison Square Garden Theater, and on HBO. “I’m back, really,” Sergey Kovalev told us, 35 minutes after he finished his rush-job smackdown of Vyacheslav Shabranskyy, and I will agree to his assertion, to a point.

Shabranskyy came to town with his role not explicitly defined, but let us all be adults in the room. He wasn’t the favorite coming to NY, and the Ukrainian had a track record of dealing with right hands like my kids deal with me telling to get off the damn screens…poorly. In a previous encounter against Sullivan Barrera, he was unable to slip, or duck or absorb them well enough to go the distance.

That historical precedent held in Manhattan, as even one glancing right by the Russian, looking to get back on firm footing after losing to pound-for-pound titan Andre Ward, had the loser on spaghetti legs. And not al dente…

So, is it proper to say “Krusher” is back? Sure, if you want to follow the storyline, cynics will say. I won’t fully be that guy, but I will say that we will better be able to see truly how much Kovalev has rebuilt his fighting engine when he’s pushed toward his limits. Could that be in his next tango, which is likely to come in March, back in his new stomping grounds, New York, where, his promoter Kathy Duva pointed out, “they penalize people for hitting low”?

March 3 seems to be the target date for the return of the man it is now all clear, arguably, to call “Krusher” again. “I’m back from two crazy looses (losses, he meant), but those looses made me stronger,” he declared, with Duva to his right, and manager Egis Klimas to his left. “And I hope in future fights I will improve much more than today.”

That task will be handed to new trainer Abror Tursunpulatov, a Russian who sat next to Klimas and barely opened his mouth at the post-fight presser, which was mostly covered by millennial videographers. But, the fighter several times made sure to note that he looks to Abror as a tutor, with that level of necessary respect. He is the “passenger,” he said and the trainer is steering him. That speaks to his newfound humility, is the message, which he said came to him when he realized that there’s a reason Andre Ward, who he called a “great” fighter, received two Ws against him. OK, Kovalev’s fierce pride is still intact. He thinks he won their first clash and believes the ref’s inattention to detail, and not censuring the Oaklander for low blows, led to his demise in the sequel.

One theme in the post-fight was this: Kovalev isn’t still much for calling out targets. He indicated it made sense for him to fight Barrera, the Cuban light heavy who beat Felix Valera on the undercard, in that March slot. I couldn’t help it, I had to ask: did that mean he’s given up on Adonis Stevenson, who holds the WBC strap, and him settling a feud that went from simmer to boil to left-over status? “I’m tired of talking,” Kovalev answered. “It’s already a long time he didn’t fight. Where is he? Who is the WBC champion, really? It’s a crazy situation with the WBC belt, really.”

Barrera was invited to fight Kovalev on this night, but he has leverage, being that he’s rated No. 1 by the WBA, which has Dmitriy Bivol as titlist, and No. 3 by the WBC, where Stevenson is king, for the record, so he wants more time and elbow room to pick and choose.

“The situation’s changed now…it’s time for the young guys to start calling Sergey out,” said Duva, the Totowa, NJ lady who will celebrate 40 years of swimming with sharks in March. “Then he can pick and choose.” Negotiations, with whomever, will begin “next week,” she said.

March 3, Duva said, seems good to go with HBO, and with The Garden, so the dance partner is needed. Readers, who makes sense to you? Barrera versus Kovalev, in an intra-promotional scrap? You believing this is a new version of Kovalev, similar to the “old” one, on the come up? Talk to us!