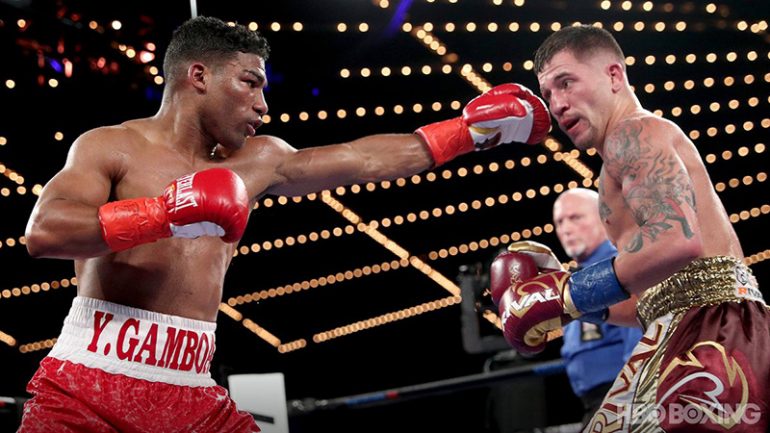 Lightweight Yuriorkis Gamboa (left) jabs at Jason Sosa during their 10-round bout on November 25. Photo courtesy of HBO Boxing
25
Nov
by Ryan Songalia

NEW YORK — Boos rang out through The Theater at Madison Square Garden on Saturday as many in the crowd felt the wrong man got his hand raised after 10 rounds.

Yuriorkis Gamboa emerged from his fight against Jason Sosa with an unpopular majority decision win, with one judge scoring the bout even at 94-94, and the other two giving it to the Cuban by scores of  95-93 and 96-92.

“I’m sorry I didn’t give you a better match, I only had three weeks to prepare,” said Gamboa, who took the fight on short notice after Robinson Castellanos withdrew from the HBO opener with a back injury. “… I needed two or three more weeks to lose the weight correctly. Of course the decision was good. I think I won every round, except for the knockdown and the point deduction.”

They were tallies that were not easily justified as Sosa, 29, pushed the fight from the outset, landing the cleaner blows, including a knockdown in the seventh round when both of Gamboa’s gloves touched the canvas. Gamboa also lost a point when referee Ron Lipton docked him in the 10th for holding (though a simultaneous head butt was missed).

Gamboa, 35, looked far better than in his last fight of note, a seventh-round stoppage loss to Castellanos in May which seemed to spell the end for his run as a top fighter.

Sosa  of Camden, New Jersey received the majority of cheers after the fight but now drops to two straight defeats after being stopped following the ninth round by Vasyl Lomachenko in April.

Gamboa (28-2, 17 KOs) has now won two straight by majority decision since August and remains alive as a viable name in the junior lightweight division.