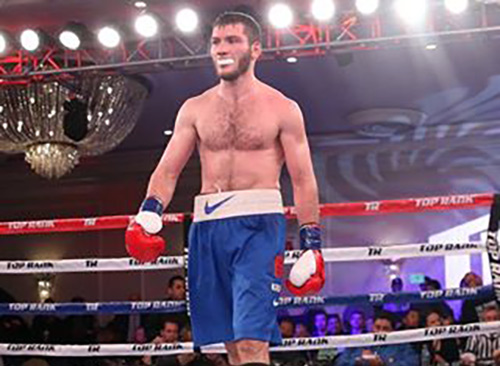 NEW YORK CITY – Bakhram Murtazaliev scored an impressive fifth-round knockout of Carlos Galvan on the Sergey Kovalev-Vyacheslav Shabranskyy undercard at The Theatre inside Madison Square Garden on Saturday. The official time of the stoppage was 1:31.

Murtazaliev (11-0, 9 knockouts), who hails from Chelyabinsk, Russia, the same hometown as his friend and promoter Kovalev, dropped Galvan (16-6-1, 15 KOs) twice in the fifth round earning rave reviews from the Eastern European portion of the New York crowd.

A pressure fighter, Murtazaliev, dropped Galvan for the first time with a short, quick left hook. Galvan managed to get up but was still feeling dazed on his feet. Murtazaliev stalked the Colombian fighter across the right and landed a succession of four unanswered punches punctuated by another left hook sending Galvan down for the second knockdown. Galvan did not make an attempt to get up so referee Ricky Gonzalez ended the count after six and called the bout to end.

Murtazaliev applied the pressure on Galvan in the first two rounds never allowing him to get comfortable. Murtazaliev worked behind a stiff jab, which perfectly set up the harder shots.

Galvan’s only highlight came in the third round when he connected on a big right hand that bothered the Russian fighter but Galvan was unable to follow that punch up with anything meaningful and Murtazaliev resumed his combinations, again backing Galvan up.

The 24-year-old Murtazaliev has now stopped his last seven opponents since making his professional debut on the Kovalev-Ward I undercard almost one year ago to the day.

The 32-year-old Galarza gets back in the win column after back to back losses to Jarrett Hurd and Ishe Smith. The Brooklyn native, fighting for the first time in Madison Square Garden. was the aggressor from the outset of the bout outworking and out-landing Herrera and controlling distance.

Galarza had Herrera hurt once in the bout when he caught the Chicago native with a hard right, which stunned Herrera and caused him to cover up. Galarza was quicker to the punch and never allowed Herrera to get comfortable. Herrera resigned himself to just trying to counter Galarza instead of taking the action to him.

“I feel good after a 14 month layoff,” Galarza said immediately after the bout. “I am shaking off some ring rust and hopefully will be back in The Garden soon. It felt great and is where I belong. There are not too many places you can call home but this one is for me.”

Nursultanov pelted Boon with big right hands and had Boon pinned against the corner with no where to run. Nursultanov unloaded a 3-punch combination for which Boon had no answer and was not even able to cover up. Referee Ricky Gonzalez decided to jump in and save the Atlanta native from a certain knockout.

The hard-hitting 24-year-old middleweight from Kazakhstan has now stopped his last 4 opponents.

Rodriguez, from Shirley, New York dropped Duarte in the second round with a body shot for the first knockdown of the bout. The Brazilian-born Duarte managed to get up but was not fully recovered. Rodriguez hurt Duarte again in the third round with a body shot that caused Duarte to peel over and complain to referee Steve Smoger that the shot was low. Smoger disagreed and allowed the action to continue. Rodriguez moved in slowly and caught Duarte with a big left hook dropping Duarte for good.

The 24-year-old Rodriguez won the 2012 and 2014 New York City Golden Gloves as well being selected as an alternate for the 2016 United Stated Olympic team.

“It feels good always to win, but to win by knockout is better,” said Rodriguez immediately after his win. “It’s sensational, spectacular to win. I felt at home. This is the first time I fought in New York since I turned pro.”

The 26-year-old Gogokhio, from the Republic of Georgia, dropped Abreu in the second round with a perfectly placed left hand. Abreu survived the knockdown but was never in the fight against the southpaw Gogokhio. Gogokhio had Abreu along the ropes in the sixth and final round but was unable to stop the fighter from the Dominican Republic as Abreu did enough to hold on to survive the round.

Gogokhio, who is coming off a second round TKO victory over Joaquin De La Rosa last month in Connecticut, is managed by Egis Klimas and is a former 3-time K1 and Glory kickboxing world champion with a record of 42-7 before turning his attention full time to boxing and signing with Klimas and Main Events. Klimas also manages Kovalev and Vasyl Lomachenko.

In the first bout of the evening Ismael Villarreal (1-0) won a unanimous decision in his professional debut by defeating Race Sawyer (0-5). The official scores at ringside were 40-35, 40-36 (twice).

The 19-year-old Villarreal from the Bronx managed to open a cut under Sawyer’s left eye in the third round with a succession of right hooks. Villarreal’s combinations were too much for Sawyer who was overmatched from the start. Villarreal is a two-time New York City Golden Gloves Champion and is following in the footsteps of his father Otilio, who fought the likes of Zab Judah and Hector Camacho in his professional career.