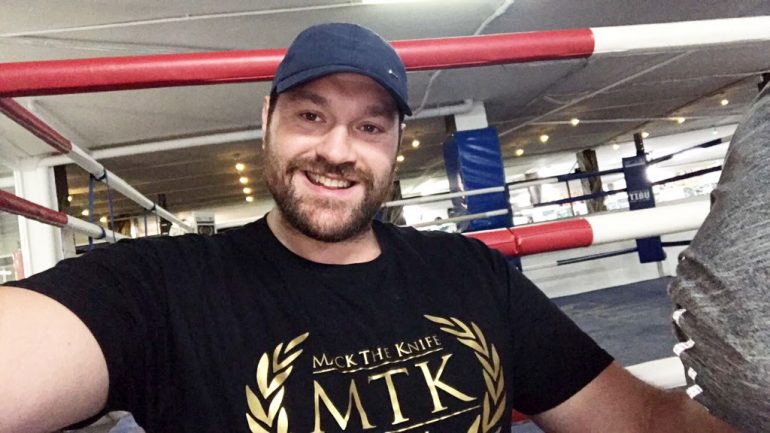 Tyson Fury is one step closer to a ring return.

“I couldn’t be happier to sign an advisory deal with MTK Global,” said Fury, 29. “It is unbelievable how fast they have grown and what they have achieved in the past few years. I spoke to my mate Billy Joe Saunders and he only had good things to say about MTK so it was an easy decision to go with them.”

Fury (25-0, 18 knockouts) awaits a December UK Anti-Doping hearing pertaining to a failed drug test in 2015, but he’s back in training, even if he is significantly over his fighting weight.

The Brit hasn’t fought since he dethroned Wladimir Klitschko via decision in November 2015. Furt twice had rematches with the longtime heavyweight kingpin derailed due to drug issues, and he was eventually suspended by the British Boxing Board of Control for cocaine use.

He also was stripped of his three heavyweight titles, but he remains the lineal and RING champion. And now that he has a management team behind him, it’s clear Fury is serious about a comeback in 2018.

“I love boxing and I need it back in my life,” Fury said. “Right now I’m working hard to shift some weight and get in shape to re-enter the ring. That won’t take me long at all and then I’ll be looking for my first opponent in early 2018.

“There are plenty of options for me. Everyone wants to get in the ring for a payday with me. So we’ll sit down and decide who we choose but everyone knows the fights I really want. I want to knock out Anthony Joshua and I want to knock out Deontay Wilder and I believe by the time those fights happen they will be to unify the heavyweight division.”

But first, Fury needs to shake off the weight — and the ring rust.

“In many people’s eyes Tyson is still the man in the heavyweight division,” said MTK Global Director Paul Gibson. “It is fantastic news for the sport that he is coming back to prove that fact in the ring.

“There are few bigger names in world boxing than Tyson Fury and we feel honoured he has chosen MTK Global to help guide him through what promises to be the most exciting phase of his illustrious career.”