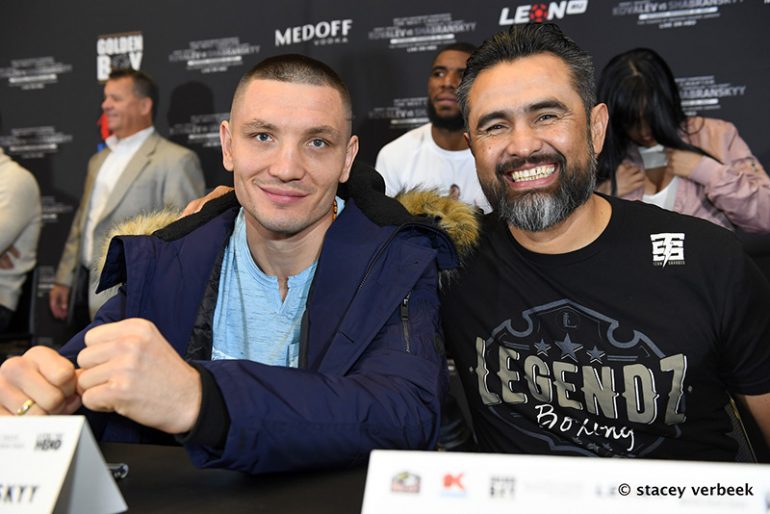 Trainer Manny Robles (right) says Vyacheslav Shabranskyy has improved since his loss to Sullivan Barrera and is prepared to shock the boxing world against Sergey Kovalev on Saturday. Photo by Stacey Verbeek
22
Nov
by Michael Woods

There is a commonality shared by light heavyweights Sergey Kovalev and Vyacheslav Shabranskyy, who tussle Saturday night at the MSG Theater, and on HBO, during the richest run of boxing at the Mecca since the 1960s.

Both men had to wrestle with uncomfortable realities, that being: who am I?

Am I what I thought I was?

I stepped to the line, and the other guy got the better of me. 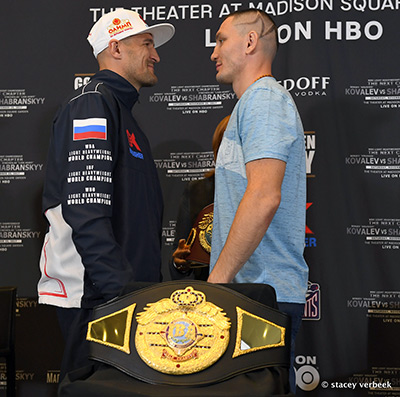 Kovalev and Shabranskyy engage in a stare down at the final presser for their Nov. 25 showdown. Photo / Stacey Verbeek

For Kovalev, it was back to back despair, when Andre Ward scored a decision over him in 2016, and then stopped him out in their June sequel scrap.

For Shabranskyy, born in Ukraine, and living in L.A., fighting under the Golden Boy umbrella, he stepped up in class to tango with Sullivan Barrera, last December. He sent the Cuban to the mat, you might not recall, but got stopped himself. He was eating too many hard and clean rights and his corner pulled the plug in round seven. The boxer took the L hard; he went into depressed mode, he admitted, as his trainer, Manny Robles, relayed the dark period.

He holed up, didn’t want to show his face, but was coaxed back to The Rock, Robles’ old gym in Carson, California. And no, if he was expecting to be hugged and soothed, that wasn’t the way it went.

Let’s get back to work, man, that was the vibe he was welcomed with. And that’s the way it should be, Robles told us Wednesday during an intimate media Q&A before the full on presser hosted by Main Events at The Garden. If Shabranskyy thought that the gym was going to make him feel weird because he’d lost that “0,” to the contrary, every guy in there knew how the 30-year-old Ukrainian felt. Soon, he was back in form, working hard, ready to work on things that needed to be tweaked if he’d not feel the same sting the next time he stepped up.

Robles said, “I think Slava learned a lot” from sparring two aces, Dmitriy Bivol (a 175 champ) and also David Benavidez (a 168 champ), for this camp. “I think we took some great stuff from that sparring,” the coach continued. Indeed, there was chatter that maybe it would be for real, that maybe we’ll see Shabranskyy versus Bivol in the near future. “Instead of sparring sessions, get paid,” interjected Roberto Diaz, matchmaker for Golden Boy.

Shabranskyy shared an anecdote, that his wife had called him, and told him that she’d had a strange interaction. She’d been at the playground, with their kid, and recognized a lady with her kid. Wasn’t that…isn’t that…yes it is.

That is Sergey Kovalev’s wife, she realized. They were quite cordial and did some chit chat. There was no trash talk, he said, of course, and nobody mentioned the stakes that would soon become clearer. But there was an unspoken communion as we took in the story–what a weird world this boxing sphere is. The wives, the families, even the athletes so alike…but the fortunes and prospects of the respective parties would soon be diverging.

Shabranskyy was low key, not terribly animated at the Q n A, and during his time at the mic. I asked his prediction for Saturday, he paused and said, “It’s gonna be surprise.” He grinned, wide, and I had to ask, a good surprise? Yes, he said. I wondered how much doubt he harbored…

My three cents: Right hands landed on the Ukrainian in the Barrera fight, and yes, Kovalev is more than well aware of that. Robles swears they’ve tightened up the D since then. He has to hope he’s tightened up a lot. Shabranskyy is a underdog, but matchmaker Diaz insists he’s a live one. Your prediction, readers?