Tom Loeffler: Gennady Golovkin promotes more with no fight set than most boxers do at all 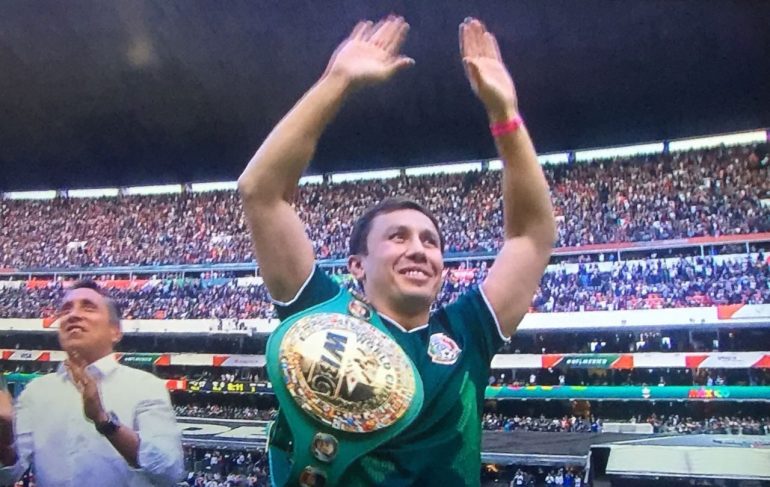 How is Gennady Golovkin, a Kazakhstani fighter who was an unknown commodity just a few years ago, now popular not just in the U.S., but all over the world?

If you ask his promoter, Tom Loeffler, the answer is simple.

“The secret to his success is GGG does more promoting of his career on a worldwide basis when he is not fighting than most fighters do when they have a fight coming up,” Loeffler said Wednesday. “Last week he was in China with Jack Ma and this week he was in Mexico at the invitation of the president of the WBC.”

When GGG faced off against Canelo Alvarez in May, there were a surprising amount of Mexican fans in attendance supporting Golovkin. Of course, Golovkin is beloved by boxing fans all over, and he touts his aggressive, attacking manner in the ring as “Mexican Style.”

He’s trained by Abel Sanchez, a native of Mexico, and he accompanied Golovkin, along with Loeffler, on a trip to Mexico City.

That included a visit to Azteca Stadium for Sunday’s contest between the New England Patriots and Oakland Raiders, and Loffler says there were greeted by chants of ‘Triple G!’ along a standing ovation from the 77,500 fans on hand at halftime.

“It was one of those moments that you will remember forever,” said Loeffler.

On Monday, Golovkin had an audience with the mayor of Mexico City, Miguel Angel Mancera, who honored GGG with a proclamation declaring the unified middleweight titleholder a distinguished guest of the city. That came after Golovkin’s support of the victims of the recent earthquake in Mexico.

“It really touched my heart to visit the children in the hospital, it was nice to bring them a special moment for a day,” Golovkin (37-0-1, 33 knockouts) said in a statement. “I have so much respect for the doctors and nurses who treat the children and their families every day. I am just thankful to God that I am in a position to be able to visit them and bring a smile to their faces.

“It was a big honor to receive the official declaration from Governor Mancera, recognizing me as an official guest and International Ambassador of Mexico City. As we celebrate Thanksgiving, we should all give thanks for the blessing we have received. My trip to Mexico certainly did that for me.”

When Golovkin and Canelo fight again, GGG should have even more supporters from his opponent’s homeland.