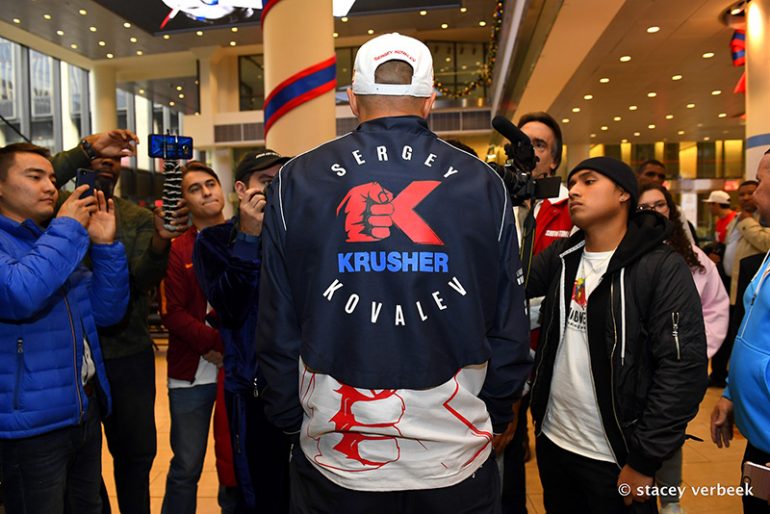 NEW YORK — A loss, then another one, can have anyone re-assessing who they are, what they were and what they are.

A boxer relies on a stout ego, Lord knows, as one must have a stern mental construct to rely on if one’s vocation involves dodging fistic missiles aimed at one’s head, then also launching them, which means you are aware your weaponry might be responsible for another man losing consciousness. Or worse.

Complex and intricate is the mentality that is attached to the world-class prizefighter, yes? Or maybe no. Maybe, at times, it is better to simplify simplify simplify, try not to muck things up with excessive rumination. Maybe better to keep it simple, not stupid, and just train your butt off and do what the coach says, run those hills, do those sprints and avoid those weekend brews, so the body-machine stays in the best possible working order it can.

The complexities and the rumination, that all popped up for Sergey Kovalev following loss No. 1, to Andre Ward, then loss No. 2, last June.

Kovalev (30-2-1, 26 knockouts) said as much today, at the press conference held at Madison Square Garden, which,  on Saturday,  hosts a comeback fight for the ex-unified light heavyweight titlist known as “Krusher” but one who needs a return to previous form to lay a new claim to that evocative nickname. He will face off with Vyacheslav Shabranskyy, a 30-year-old Ukrainian and Golden Boy Promotions boxer (19-1, 16 KOs).

The Russian-born boxer, who lives in Florida, certainly looked the part of the re-ascending athlete as he took press queries from RingTV.com and A-list scribe Thomas Hauser, but as his promoter, Kathy Duva of Main Events, 39 plus years of running rodeos, knows it’s all talking and the walking, on Saturday night at the MSG Theater, and on HBO, that will prove the point. Or perhaps prove those that knocked around Kovalev’s brain after losing a decision to Ward in 2016, and then losing via stoppage, a fight in which some watchers thought he looked like he wanted to quit. 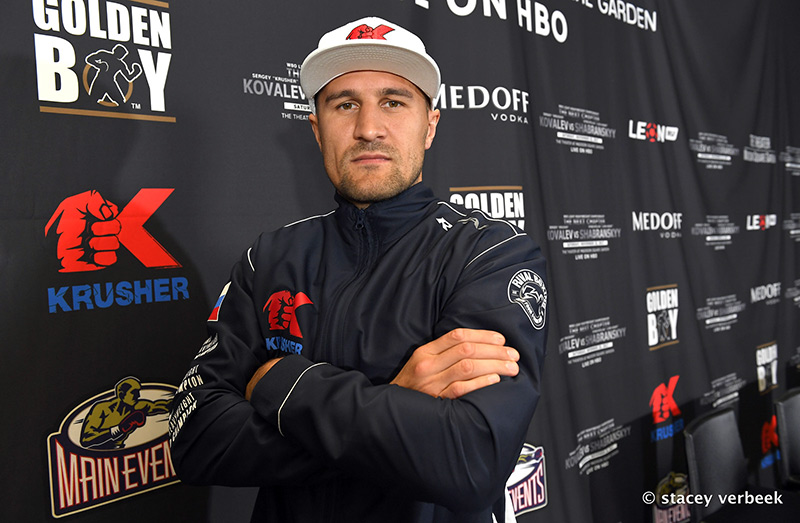 The boxer didn’t share today (Wednesday) that he was left adrift, in regard to his skills. However he did note that he admits his resolve had diminished, that he hadn’t been treating the sport with the same passion and integrity of devotion as he had on his come-up. That’s a familiar tale, isn’t it?

And Kovalev said he’d been pondering what he’d done wrong, in training, between fights, at the fridge…but things really clicked in when, this summer, on July 20 to be exact, he was in a car accident in Russia. A car drove toward him, he veered away and his car plowed into a forest but didn’t disintegrate against a tree. Miraculously, he told the press, touching on a tale he told to Greg Bishop of Sports Illustrated, he wasn’t dead.

Then, as he relayed to Bishop, he visited Greece and got some wise counsel from sages and from the vibe of the locale. He told Bishop, “I changed, in my mind, everything. I want to change all my life. From myself, what I should eat, what I should do, what I should drink, what I should read. Everything. Right then.” This, he told us, was the final bell, the one that brought an urgency of clarity.

Word is Kovalev’s pretty much just eating veggies now and promoter Duva, while allowing that we will have to see Saturday if the talk proves to be bolstered with action, to her, the boxer looks years younger.

I asked her after the presser, over which which she presided, and featured Kovalev manager Egis Klimas admitting he’d tried to smarten his guy up over the last couple years but a stubborn Kovalev wouldn’t listen, if she’d known Kovalev was slipping.

She told me that she heard things but she didn’t really want to know, didn’t want to believe. Yes, she said, going in to some recent fights, she thought he looked more drawn, like the weight cut hadn’t been at all that kind. But this looks like a “new old” version of Kovalev. He said the same, telling me that, no, he hadn’t quit drinking; he doesn’t have a drinking problem, no matter what whisperers say, but he simply respects the process more so now, realizes that this is an almost sacred endeavor, this sport.

Kovalev also said he is now aware of his place in his familial universe: No more skidding off roads, he wants to be there for his mom, for his wife and kid. And he said, he has more boxing to do. He didn’t want to share his goals but made clear that, yes, he’s 34, but, no, he’s not at the finish line.

Call it a comeback? I’d say so; he wasn’t away from the sport that long but mentally/emotionally, he was miles away and he declares he’s returned to a good place. We can see for ourselves Saturday night, in New York and on HBO, if he’s all the way back.