Trainer sounds off on Julian Williams’ victory over Ishe Smith 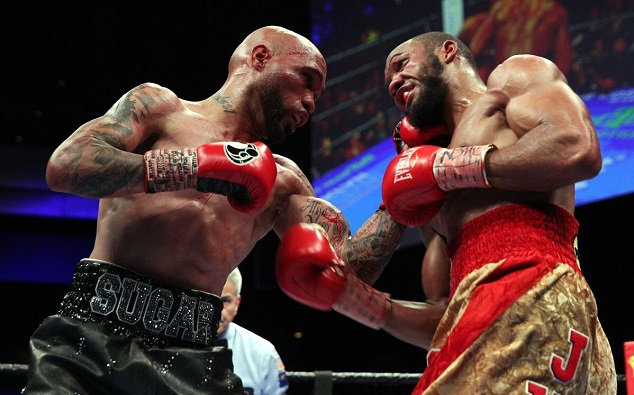 Julian “J Roc” Williams and Ishe Smith engaged in a young gun versus gray-ish gunslinger scrap on BOUNCE Saturday night, and the kid was able to use a volume edge to gain a decision victory after 10 rounds contested at junior middleweight.

Williams’ trainer, Stephen “Breadman” Edwards liked that his guy got the W, but thinks the 27-year-old Philly-hitter could have made things easier for himself in Vegas on the Mayweather Promotions card.

The trainer offered RingTV.com a detailed post-mortem and offered us deeper insight beyond takeaways.

The trainer said that he had it 7-3 (in rounds) for his guy, and that was the way I saw it. Social media slayers might have been influenced by color man Austin Trout, who saw a closer fight, according to Edwards.

“I’m not happy totally with the performance,” Edwards admitted. “I feel like at this stage J Roc should be able to box a complete fight without getting drawn into nonsense outside the ring. That didn’t show maturity.”

Edwards is referring to some back and forth yapping between his fighter and promoter Mayweather, who was stationed in the front row. He’s talking about the fighters’ focus and professionalism, and him not getting distracted from the task at hand.

Another thing: Edwards said he talked to his guy before and during about defusing Ishe and quieting the crowd with an omnipresent jab. He thinks some watchers were fooled by activity from Smith that wasn’t effective aggression; that Williams caught and deflected many of his launches.

“I thought Ishe’s only chance was to turn it into an ugly, crappy fight,” said Edwards. “I do think physically, Ishe, in his next fight, will get destroyed because he gave so much in this fight with a younger, stronger, faster fighter. I don’t think he will ever get to that place again. I heard he was hurting in his locker room. J Roc gave him a physical beating. But J Roc could have defeated the crowd with a simple jab and then have Ishe running into shots. He couldn’t handle speed and a phenomenal jab. If he woulda boxed, kept it simple.”

Edwards gives credit to Smith for providing an A-grade performance, for being at his best, but he sees him as a gatekeeper and wishes that his guy had put more distance between him and the gatekeeper.

Interestingly, the trainer will offer powers that be, Al Haymon and whoever, that he thinks it wisest that J Roc take another scrap to work on improvements before he’s elevated into a title crack. Of course, if a title shot is offered, he will go with the flow.

“We want to go into a title shot hot,” said Edwards. “Nah, I’m not please at all (with how the fight was won). No title shot next if it was up to me. I would rather see us fight a contender.”

Williams is No. 4 in the WBC, where Jermell Charlo holds the strap, and No. 7 with the IBF, where Jarrett Hurd got the gold.

We chatted about the negative assessments from the Twitterati. Edwards said he really doesn’t pay much attention to that and tells J Roc not to indulge either. He said he’s dealt with impostors making pseudonym accounts and trying to mess with him, so the whole setup seems iffy to him.

“If we KO Jarrett Hurd next fight, those same guys take their stuff back,” Edwards said.

He also said there is so much that isn’t known to most of the opiners that, he implies, maybe they wouldn’t be so vociferous with their stances if they were in the loop. For instance, Edwards said that fights were offered to Ishe Smith and Austin Trout on the J Roc come up and pairings couldn’t be made. But after J Roc has a loss, then, the trainer said, some folks who were a “no” came around to a scrap.

“That’s something the Sunday morning coaches and matchmaking experts don’t understand,” he continued. “Woods, hashtag this . . . Let whoever think whatever. We took this fight in Ishe’s home town, for not a lot of money. We had an injury four months before the fight; never complained. We did VADA (PED testing) before and after and never made an excuse.”

My three cents: Edwards’ candor is refreshing. He didn’t give his kid an A-Grade, and isn’t hiding his true feelings on the quality of the strategy and use of the full arsenal by his fighter. And guess what? True talk if J Roc can handle it – and I bet he can. Him and Edwards don’t seem susceptible to a rupture. That will lead to improvements because William’s is not being fed false praise just to keep peace and harmony.

Readers, talk to me . . . I told Edwards, I thought Ishe fought quite well and that he is due a big dose of praise. Maybe his effort kept J Roc from fighting the style the trainer would have preferred. What is your take on the trainer analysis of J Roc’s outing? Who would you like to see him in with next? Should he get a title crack, or take another challenge and try to build momentum for a title tango?