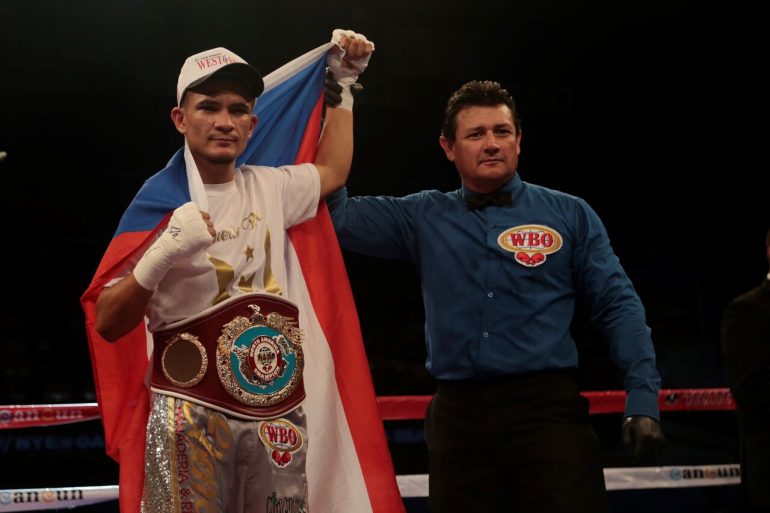 Martinez was always going to win the fight but, in this instance, Jose was too much for Jesus.

After a quiet opening round, Jose Martinez (20-0-1, 13 KOs) began breaking his opponent down. The classy Puerto Rican prospect landed with more frequency as the bout progressed and a left hook to the body dropped his opponent late in the third.

Jesus Martinez (23-3, 11 KOs) survived the round, but the end was inevitable. Another left hook to the body dropped him in the fourth and he was counted out at 0:19.

“I’m very happy with the win,” said Jose Martinez, who resides in Las Marias. “I thought that (the fight) would last longer, but the goal was accomplished. The knockout is what we wanted, though we were prepared to go the distance. I’ll let Miguel Cotto Promotions decide what’s next for me. This victory is for Puerto Rico.”

With the win, Jose Martinez, who is ranked No. 9 by the WBO, won a vacant regional title belt.

Jesus Martinez, who hails from Monteria, Colombia, has now lost his last two bouts in succession.

Welterweight prospect Alexis Rocha knocked out Pascual Salgado (12-8, 8 KOs) of Colombia in the opening round of the co-feature bout.

The southpaw Rocha (10-0, 7 KOs), who is the younger brother of junior featherweight contender Ronny Rios, landed a left hand to the body which dropped Salgado to one knee. He remained in that position as referee Celestino Rocha counted him out at 1:46.

In the opening bout of the ‘Golden Boy Boxing on ESPN’ broadcast, junior welterweight prospect Vergil Ortiz, Jr. (8-0, 8 KOs) knocked out Evandro Cavalheiro of Brazil at 0:21 of the opening round.

Confusion marred the end of the fight after Ortiz appeared to have scored a clean knockout. An overhand right landed just above the ear of Cavalheiro and dropped him to a knee. Referee Celestino Castro originally ruled that Ortiz landed a blow behind the Brazilian’s head, but the Cancun Boxing Commission watched a replay and determined the punch was legal.

“I hit him on the side (of the head), but the referee saw something different,” said Ortiz, who is trained by Joel Diaz. “I knew he was done but, for a second, I was scared that I’d be disqualified or get a no contest. Then, I heard that it was a TKO (victory) and I was happy.”

In preliminary action, super middleweight Maricela Cornejo won a six-round split decision over Irais Hernandez (2-1, 2 KOs). One judge scored the bout 59-55 for Hernandez, while the other two judges scored 58-56 in favor of Cornejo who improves to (9-2, 2 KOs).