Vyacheslav Shabranskyy: It’s ‘all or nothing’ in title fight against Sergey Kovalev 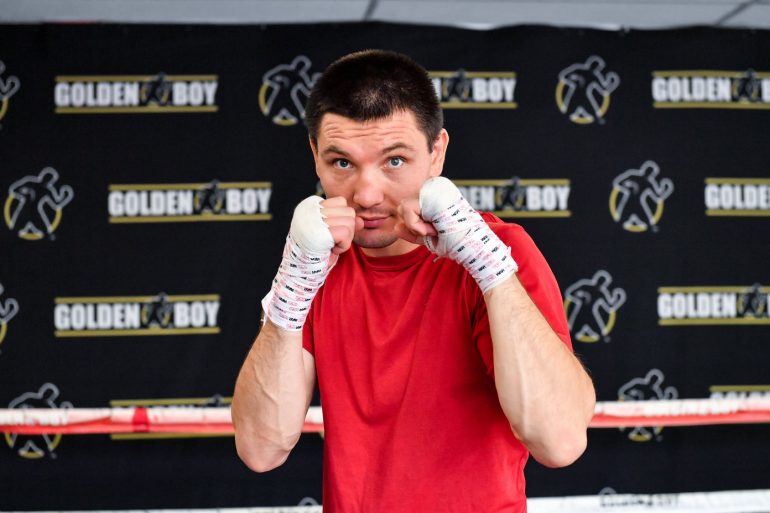 LOS ANGELES — Vyacheslav Shabranskyy wasn’t in the mood to chat.

When pressed about just how he’ll upset Sergey Kovalev and achieve his dream in his first world title shot, he was short and the to point: you’ll see next Saturday in New York on HBO.

It was a surprise that Shabranskyy even received the assignment in the first place.

Sure, Kovalev is coming off consecutive defeats to Andre Ward, including a stoppage defeat in June, a performance where the Russian’s then-trainer John David Jackson said he quit.

So when Kovalev was scheduled for a return bout on HBO, the former unified light heavyweight titleholder wasn’t expected to face King Kong. The fight was eventually offered to Sullivan Barrera, who like Kovalev, is promoted by Main Events, but the Cuban turned down a $400,000 purse.

Next up was Shabranskyy, who Barrera knocked out in the seventh round in December.

The Ukrainian has since rebounded with back-to-back knockout wins, most recently over Todd Unthank May in August.

And now, Shabranskyy (19-1, 16 knockouts) is on the precipice of his first truly big fight.

Even though Ward killed Kovalev to the body, Shabranskyy’s trainer, Manny Robles, said they won’t necessarily target the midsection. He also doesn’t plan to have his charge test Kovalev early after he displayed poor body language in the Ward fight and was accused of quitting.

To prepare for Kovalev, Shabranskyy has been sparring with two champions: Dmitry Bivol and David Benavidez.

Robles brought in a coach to work on Shabranskyy’s speed and foot movement, and the trainer believes fans are “going to see a whole different Shabranskyy.”

“We don’t have the pressure of being undefeated,” Robles said. “Slava, after that loss, learned a lot and he’s a lot different physically and mentally.”

He’ll have to be to upend Kovalev, a fearsome puncher with a rangy jab and an aggressive style. The 34-year-old remains on THE RING’s pound-for-pound list (No. 5) and is the No. 2 fighter in the light heavyweight division.

“I was so excited when I found out this bout would be for a world title,” said Shabranskyy, who will be competing for the vacant title made available after Ward retired. “I had accepted the fight before knowing it would be for a world title. We got the call from his side and we took the fight. But then the WBO called and we were very excited. I’m very hungry and prepared to win.”

To beat a guy like Kovalev, he’ll need to be a lot more than just hungry.