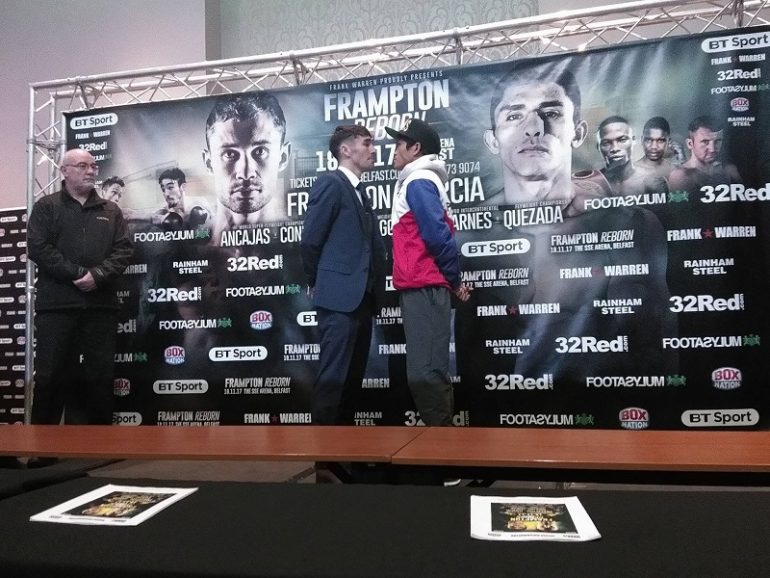 Jerwin Ancajas may not have the hometown advantage in his next title defense but he isn’t without fan support of his own in Northern Ireland.

About 20 Filipino fans have dropped by their hotel in Belfast to wish the IBF junior bantamweight titlist well before he faces unbeaten contender Jamie Conlan this Saturday, November 18 at the SSE Arena.

“They all said good luck and I saw in them the happiness and excitement to see the fight,” said the Panabo City native Ancajas (27-1-1, 18 knockouts).

“It’s very happy to think that there is a lot of support, especially from your countrymen.”

The two fighters met face-to-face on Thursday for the final press conference, with Conlan wearing a three-piece suit and Ancajas a jumpsuit fashioned with the Philippine flag colors and a baseball cap with his surname across the front. Conlan appeared slightly taller while Ancajas was bulkier.

Ancajas says Conlan (19-0, 11 KOs) was respectful but seeing his challenger up close only hastened his desire to commence the proceedings.

“When I saw Conlan, I got more excited for the fight,” said Ancajas. The sentiment was mutual.

“Wish it was right now, I feel like chinning someone,” Conlan told iFL TV. Conlan, six years older at 31, said he had sparred more rounds than he had in the previous three years combined, which he believes will condition his mind to stick to the game plan he’s laid out with trainer Danny Vaughan, and not fall into a “gunslinger fight,” as has been the case in recent years.

Conlan has been down at least five times in his career, while Ancajas has never been dropped. Even still, Conlan is confident that those nights, when he survived knockdowns and cuts, have given him a level of experience that Ancajas hasn’t had to deal with.

“If the sh*t hits the fan, I know I’ve been there and that he hasn’t been there.”

(READ: Expectant dad Jamie Conlan has much to fight for ahead of first title shot)

Both men trained under rugged conditions, with Ancajas breaking in his new “Survival Camp,” in a secluded part of provincial Cavite, and Conlan holing up in a barn converted to a gym in the Scottish countryside.

Jimenez says they are expecting nothing short of the toughest night of Ancajas’ career against a “Gatti-like” warrior with the crowd behind him.

“This is like Mount Everest,” said Jimenez, likening the fight to the treacherous summit, which has claimed the lives of many who tried to scale it.

“We need to be smart but we need to test him also.”

(READ: Jerwin Ancajas plans to get past Conlan, then target Inoue)

One boost for Ancajas: The fight will be televised in the Philippines, though on a same-day delay, by the recently rebranded ESPN5, Jimenez says. Ancajas’ title win over McJoe Arroyo and first defense against Jose Alfredo Rodriguez were not shown in the Philippines, while his last fight against Teiru Kinoshita was included in the GMA broadcast in support of the Jeff Horn-Manny Pacquiao main event.

A request for comment from ESPN5 was not responded to by the time of this story’s publication.

The 12-round fight will support the Carl Frampton-Horacio Garcia main event on the Frank Warren-promoted card.

On Wednesday in Honolulu, Hawaii, Reymart Gaballo (17-0, 15 KOs) made short work of Ernesto Guerrero (27-22, 19 KOs) in his American debut, dropping Guerrero with a right hand before putting him back down for the 10-count with a left hook to the body in round two.

Gaballo, 21, of General Santos City, Philippines absorbed more counter rights than he would have wanted in his first fight in 11 months. He has been training in Miami since July with new coach Osmiri “Moro” Fernandez, and promoter Jim Claude Manangquil estimates he’ll be back in the ring by February or March.