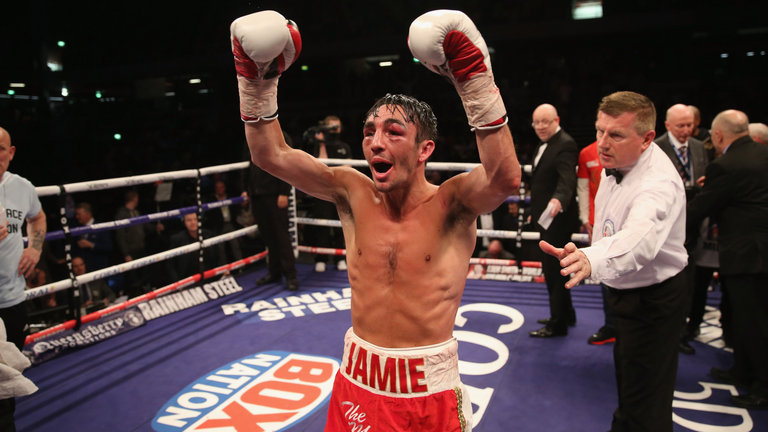 He might not be a household name yet, but Jamie Conlan is already addictive.

Affable, charming, well-spoken, it’s sometimes difficult to remember that the popular scrapper from Belfast, Northern Ireland, can fight like hell. And it’s highly likely that Conlan will be forced to dig deep once again if he is to lift the IBF junior bantamweight title from Jerwin Ancajas at the SSE Arena in his home city.

Ancajas, who is rated No. 6 by THE RING at 115 pounds, is unquestionably the most dangerous opponent that Conlan will have faced. The Filipino southpaw won the title by outpointing McJoe Arroyo last September and his two subsequent title defenses, against Joe Alfredo Rodriguez and Teiru Kinoshita, ended in seventh-round stoppages.

“He’s technically gifted, does the basics brilliantly and he doesn’t make many mistakes,” said Conlan in an interview with RingTV.com. “(Ancajas) is a good boxer and I think it’ll be a chess match, although there will be times when we’ll fight it out. It’s the toughest test of my career, but it’s something I’ve prepared my whole life for.

“Ancajas will also be the first southpaw I’ve faced for some time, but I grew up with (younger brother) Michael (a southpaw) who is extremely gifted. I’ve been used to southpaws my whole life, so I’m not fazed. We also brought in some great southpaw sparring; former world champions from Mexico, so we’ve covered all bases.”

Conlan’s brother, Michael, is the former amateur star who signed for Top Rank shortly after giving Olympic judges the one fingered solute when they controversially ruled against him in Rio 2012. Both fighters wear their hearts on their sleeve, although it’s Jamie, who turned professional in 2009, that has already forged a reputation as a give-and-take warrior.

In April 2016, Conlan got off the floor twice to halt Anthony Nelson in the eighth round of a stunning encounter that was nominated by THE RING for Fight of the Year honors. The Belfast man also had an up and downer against Junior Granados a year earlier and got off the floor to outpoint Yader Cardoza in his most recent bout.

“I’ve become comfortable being uncomfortable and that’s down to the places I’ve been,” said Conlan (19-0, 11 knockouts). “I know the characteristics I have and I know the mistakes I’ve made previously. (Ancajas) hasn’t been through (the wars), so while a lot of people see the tough fights as a flaw, I can have a positive outlook on it.

“Those experiences built my character. Ultimately though, the mistakes I’ve made previously cannot be made at the elite level. It’s all about timing. Everything happens for a reason. I’ve been through the hard fights and came out the other side a better man. It’s all been to my benefit.”

As well as being battle-tested, Conlan does have other things going for him. He’s unbeaten and doesn’t know how to lose. He will also have home support from arguably the most intense and passionate fight fans in world boxing. And, perhaps more importantly, the challenger is hungry after a stop-start professional career that was far from rewarding in the early years.

“At lighter weights, I had no backing, no promoter, no push from management,” revealed Conlan. “It’s been a long, hard career with plenty of letdowns. There was a time when even getting a British title shot seemed like it could never happen.

“To win a world title in front of my home crowd would be a dream come true and totally surreal. To do it in front of the people who have paid their hard-earned money to watch me in floater fights, after the main event, when everyone else had gone and they stuck around. It would be fantastic; not just for me but for the people of Belfast and my friends and family.”

For many, including myself, the 115-pound division is the best in the sport. ‘The Superfly’ card, which took place in September, was groundbreaking and Conlan hopes to see his name up in lights in the future alongside such stars as Naoya Inoue, Wisaksil Wangek, Kal Yafai and Juan Francisco Estrada.

“HBO is on board and (junior bantamweights) are headlining now,” said Conlan with an edge of excitement in his voice. “That was unheard of in the 80s and the 90s. The little men deserve it because we get overshadowed by the big guys, but we have as much talent and heart as they do – maybe more.”

Ancajas-Conlan will take place on the undercard of Carl Frampton’s homecoming bout against Horacio Garcia. Also on the card, Zolani Tete will defend his WBO bantamweight title against Siboniso Gonya. The show will be broadcast live on BT Sport/ BoxNation in the U.K.