Zolani Tete: ‘Our ultimate goal is to be the undisputed bantamweight champion’ 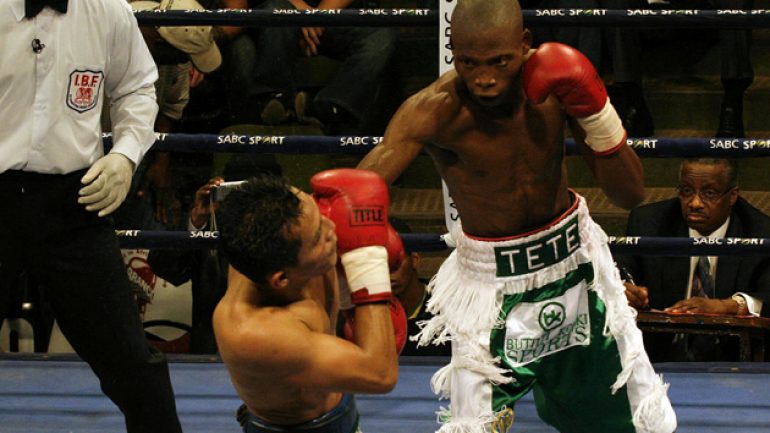 The superbly gifted Zolani Tete will look to make a successful first defense of his WBO bantamweight title against fellow South African Siboniso Gonya at the SSE Arena in Belfast, Northern Ireland, on Saturday.

Tete, who is rated No. 1 by THE RING at 118 pounds, behind champion Shinsuke Yamanaka, expects his countryman to put up a good effort but believes his greater skillset and experience will be decisive.

“Siboniso is a good fighter, I take nothing away from him,” Tete told RingTV.com through manager Mlandeli Tengimfene. “I’m just hoping he knows that he has bitten [off] more than he can chew. I don’t take any of my opponents lightly and therefore when I enter the squared circle, I go for the kill, especially when my title is on the line.”

It’s interesting that Tete and Gonya meet in a world title fight thousands of miles away from home. Unfortunately, the matchup and its locale reflects the current state of boxing in South Africa.

The irony of their world title taking place in Belfast is not lost on Tete (25-3, 20 knockouts).

“It is very sad for two South Africans to fight for a world title outside the country,” he said. “I would have loved the fight to happen in our country. Both our camps here in South Africa tried to get funds from the South African government (to) no avail.

“It’s all water under the bridge now. My promoter, Mr. Frank Warren, came on board and rescued the fight. He took it to Belfast, where there’s a unified IBF and WBA bantamweight champion, Ryan Burnett, who I’ve been calling out since he won the IBF title. It’s a chance to meet (Burnett) and his camp and we (can) talk of the unification after I take out my fellow South African.”

The opportunity to challenge for a world title has come quickly for the unheralded Gonya. Although he turned professional in 2011, the challenger hasn’t mixed anywhere near world class.

However, Gonya did shock Immanuel Naidjala in April to earn a lofty No. 3 ranking with the WBO at bantamweight. Interestingly, for that fight, he came in just a shade over 115 pounds, suggesting that Tete is likely to be the much bigger man this Saturday.

The 29-year-old southpaw believes the opportunity has come too soon for Gonya (11-1, 5 KOs).

“I believe he’s been longing for this opportunity and yes it came too soon for him, or rather at the wrong time, because ‘Last Born’ is unstoppable,” said Tete. “(I am) aiming for bigger opportunities, so yes it’s unfortunate for him.”

The two have never crossed paths in South Africa, although Tete has watched Gonya fight twice on TV.

Tengimfene brokered a deal for Tete to fight for Frank Warren after his star client demolished the previously unbeaten Paul Butler in March 2015. Tete won another two fights at home before signing with Warren.

For their fourth outing under the British promoter, Tengimfene switched attention to Gonya after failing to reach a deal with any of the other titleholders.

“In South Africa, this could have been a local derby and it made sense to us from that angle,” said the manager. “In fact, let’s put it on record that we approached Burnett, Zhanat [Zhakiyanov] and Luis Nery for unification [fights] and all rejected except for the latter. Unfortunately, there was this PED doping cloud over him.

“Gonya’s name came up after all of that and he is highly rated as the first two boxers in the ratings were due to meet [Omar Narvaez stopped Nikolai Potapov in seven rounds on October 14 in their final eliminator].”

While Tete is fully focused on Saturday’s fight, Tengimfene, is casting his gaze further afield for 2018.

“We will be due for [our] mandatory against a veteran [and former two-weight titlist] Omar Narvaez, 90 days after Gonya,” he explained. “Then we will invite any bantamweight world champion to unify the division.

“Our ultimate goal is to be the undisputed bantamweight champion in 12-18 months, then terrorize the bigger divisions before we think of closing the boxing chapter.”

Tete-Gonya will take place on the undercard of Carl Frampton’s homecoming bout against Horacio Garcia. Also on the card, Jerwin Ancajas will defend his IBF junior bantamweight title against Jamie Conlan. The show will be broadcast live on BT Sport/ BoxNation in the U.K.