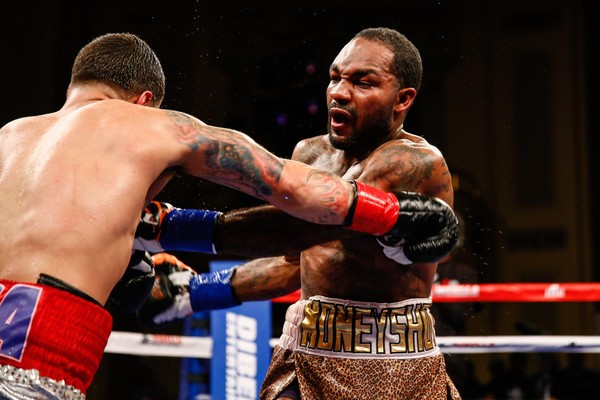 Friday, November 10 (continued): I spent much of Part One explaining how 2017 has been such an exceptional year for boxing and, in doing so, I recounted the long list of tremendous fights that make the case. Add Yuandale Evans’ hard-fought 10-round split decision over Luis Rosa to the list. The toe-to-toe action and multiple momentum swings comprised the the perfect way for Showtime to end its 2017 slate and served as an appropriate bookend to its first main event, the action-packed draw between James DeGale and Badou Jack.

Rosa controlled the first four rounds by imposing his preference for high-volume trench warfare. During that stretch, Rosa averaged 88.8 punches per round – of which an incredible 80.8 were power shots – while Evans fired 72.8 total punches per round and 50.3 power attempts. Still, thanks to Evans’ busy and accurate jab (22.5 attempts and 8.0 connects per round) and his better accuracy (43%-37% overall, 36%-9% jabs, 46%-40% power), Evans trailed just 133-124 in total connects.

Evans began turning the fight in the fifth by putting more space between himself and Rosa, while increasing the frequency (from 22.5 attempts in rounds 1-4 to 35.3 in rounds 5-7) and effectiveness of his jab (from 8.0 connects per round to 11.3 – nearly triple the 4.3 featherweight average). That allowed Evans to out-land Rosa 84-62 overall and 34-3 jabs, as well as seize a 208-195 lead in total connects.

The contest’s most dramatic round was the eighth. Just before the one-minute mark, Rosa, from a semi-southpaw stance, rocked Evans with a right hook to the chin, a blow that ignited a sensational middle-minute outburst (27 of 48 overall, 25 of 45 power). Rosa’s surge continued into the final minute but, with 25 seconds remaining, Evans suddenly flipped the script with a right that wobbled Rosa. Even though I was wearing headsets, Evans’ rally produced a deafening roar at ringside that continued long after the round-ending bell. A hyped-up Evans got into Rosa’s grill before Evans’ chief second Barry Hunter pulled him away, lifted him up and carried him to the corner.

Despite Evans’ final-minute heroics, the eighth was still a giant statistical round for Rosa, so much so that his 49-27 bulge in total connects allowed him to regain a 244-235 advantage. Both fighters sensed the result remained in doubt, entering the final six minutes, and they fought accordingly. Surprisingly, Evans moved Rosa backward more often and he got the better of the action, as he landed 32 of his 75 punches to Rosa’s 24 of 74. Fittingly, going into the 10th round, Rosa held a slim 268-267 lead in total connects.

As the action raged, “ShoBox” analyst and Hall-of-Famer Steve Farhood wondered if the winner of the final minute would also end up winning the fight. As is often the case with Steve, he was correct; in the last 60 seconds, Evans out-landed Rosa 17-11 and connected on more power shots (14-11) to increase his 10th round lead to 49-27 overall and 36-27 power. That surge also allowed Evans to nail down a 316-295 advantage in total connects.

While the decision was split for the hometown favorite (96-94, 97-93 Evans, 96-94 Rosa), this was no hometown verdict. Evans overcame a rough start by adjusting his game within the chaotic environment Rosa had created. Rosa succeeded in getting the slugfest he wanted, as he averaged 85.9 punches per round while forcing Evans to fire 77.2. Rosa also led 287-225 in landed power shots but Evans’ distance control resulted in a 91-8 advantage in landed jabs, as well as the necessary room to pave the path to victory.

ShoBox Executive Producer Gordon Hall said in Part One that the Evans-Rosa winner would become a fringe contender at 126 and, while Evans earned his chance to advance, Rosa fought gallantly and effectively enough to get more attractive assignments.

2016 U.S. Olympian Charles Conwell makes it easy to forget he turned 20 just eight days earlier. Outside the ring, he is said to be intensely focused on achieving greatness and inside the ropes, he has remained on track.

Hall of Fame promoter J Russell Peltz told Hall that Roque Zapata was a volume puncher who always produced competitive fights and, from time to time, was good enough to spring upsets. Despite losing a lopsided unanimous decision, Zapata still proved Peltz correct in that his fusion of high work rate and constant unpredictable movement forced Conwell to bring out his best from beginning to end. That best was more than good enough, as he scored three knockdowns (two in the third, one in the fifth), while also demonstrating pinpoint accuracy and excellent defense (as percentage gaps of 38%-16% overall and 47%-20% power prove). The most impressive aspect of Conwell’s game against Zapata was his robust body attack, which accounted for 80 of his 175 total connects and half of his 150 landed power shots. He landed 10 or more body punches in all but the first round and, in rounds five and six, he logged 19 and 16 respectively.

To Zapata’s credit, he still threw more than Conwell (552 vs. 466) despite the punishment he absorbed. Conwell, however, prevailed 175-91 overall, 25-14 jabs and 150-77 power, as well as 60-51 (twice) and 60-53 on the scorecards. I was impressed with Conwell the first time I saw him fight in Miami, Oklahoma, earlier this year, and am looking forward to chronicling his future ShoBox appearances.

The result of some fights can be predicted at the weigh-in. The most famous example occurred the day before the October 1990 heavyweight title fight between champion James “Buster” Douglas and mandatory challenger Evander Holyfield, in which Douglas’ portly 246-pound physique reportedly prompted a stampede toward the betting windows. The next night, Holyfield knocked the crown off Douglas’ head with a titanic counter right to the jaw in round three.

When Hall told me New Zealand’s Junior Fa had scaled 262 pounds – 17 pounds lighter than his most recent fight against Hunter Sam last May – and that “Fast” Fred Latham had weighed a career-high 261, I suspected a short fight was at hand. I couldn’t have guessed, however, that it would end in just 67 seconds. Fa looked much more fluid and self-assured than the paint-by-numbers fighter I saw on video. A solid left to the jaw propelled Latham to the ropes, after which a blindingly fast series of accurate power shots left a woozy Latham propped against the corner pad.

The numbers further illustrated how lopsided this match was as Fa threw 42 punches to Latham’s 10 and led 20-3 overall and 17-1 power. Better yet for Fa: He landed 48% of his total punches and 59% of his power shots. While this wasn’t Fa’s first U.S. appearance (he stopped Keith Barr on the Deontay Wilder-Gerald Washington undercard in Alabama last February), his performance here virtually guaranteed he will be back on this side of the world sometime soon – very soon.

The evening’s co-feature between welterweights Radzhab Butaev and Janer Gonzalez may have provided a preview of how the upcoming Vasyl Lomachenko-Guillermo Rigondeaux Junior lightweight title fight could play out. There are two parallels; first, Lomachenko and Butaev hail from the former Soviet Union (Ukraine for the former, Russia for the latter), while Rigondeaux and Gonzalez hail from the Spanish-speaking nations of Cuba and Colombia, respectively. Second, all four fighters boast an almost absurd number of amateur fights: A combined 872 between Lomachenko (397) and Rigondeaux (475) and 762 between Butaev (462) and Gonzalez (300).

In his most recent outing, a third-round KO over Sherzodbek Alimjanov, Butaev averaged a robust 71.4 punches per round and out-landed his opponent 62-17 overall and 44-8 power, so I was initially surprised with the cautious manner he adopted against Gonzalez. Then again, Gonzalez’s technique (as well as his superior height and reach) probably demanded a more careful approach. Although not many punches were thrown (40.3 per round for Butaev, 36.8 for Gonzalez), it was clear to me each fighter was expending tremendous mental energy, as they scanned for miniscule openings.

Butaev emerged with the unanimous decision (80-72, 79-73, 77-75) because he managed to out-jab the taller Gonzalez (43 of 160, 27% to 28 of 121, 23%) and because his singular quick-strike rights landed far more often (66 of 162, 41% to Gonzalez’s 47 of 173, 27%). During the many lulls in the action, my mind conjured memories of the 1972 Bobby Fischer-Boris Spassky world championship chess match in Iceland, the 1982 junior middleweight title fight between Thomas Hearns and Wilfred Benitez (which was preceded by the classic war between Wilfredo Gomez and Lupe Pintor), while also projecting forward to Lomachenko-Rigondeaux. By the way, I believe Lomachenko’s youth, size and volume will prove too much for even Rigondeaux’s sublime skill to overcome. I wouldn’t be surprised if “Hi-Tech” bags the “Jackal” sometime in the later rounds.

Although the Showtime portion of the work day was over, my arrival at the hotel only signaled the start of even more work I needed to complete before turning the lights out. First, I entered the data from the five fights Andy and I counted into the master database. When that was finished, I spent the next 35 minutes updating information on the judges that would be working tomorrow night’s HBO tripleheader and emailing the information to CompuBox president Bob Canobbio. Once I finished winding down, I turned out the lights at 3:30 a.m.

Saturday, November 11: Unlike the previous day, my slumber was sporadic and all too brief, as I awakened just four hours later. I got in as much writing as I could before my goal departure time of 10 a.m. Just as I had done yesterday, before leaving for the venue, I sent a text to the valet stand to have my car moved from the hotel’s parking garage, a relatively new procedure for me. By the time I packed and checked out of my room, my vehicle was ready to drive.

The sunshine concealed the 27-degree chill but thankfully my new car’s heater was in good working order. Also, Google Maps guided me to the Interstate 77 South ramp, which ended the dreaded urban driving portion of the trip. I spent the next three-plus hours listening to various Sirius XM channels, monitoring my progress on Google Maps and allowing my mind to wander as it pleased. I arrived home shortly before 2 p.m., ending what may well be my final journey of 2017.

As I write this, I believe my next trip will begin January 11, 2018, with the destination being the Turning Stone Resort & Casino in Verona, New York. There, one day later, Claressa Shields will defend her IBF and WBC super middleweight belts against unbeaten 41-year-old Tori Nelson, who, in consecutive fights, won belts at 154, 160 and 168 pounds. Although I’ve opted to drive to Verona in the past, the very real possibility of “snow belt” blizzards persuaded me to travel by air. In the meantime, I will thoroughly enjoy the upcoming holiday season – and the many boxing matches that are to come.

Until next time, happy trails!

Lee Groves is a boxing writer and historian based in Friendly, West Virginia. He is a full member of the BWAA, from which he has won 15 writing awards, including 12 in the last seven years and two first-place awards since 2011. He has been an elector for the International Boxing Hall of Fame since 2001 and is also a writer, researcher and punch-counter for CompuBox, Inc. He is the author of “Tales from the Vault: A Celebration of 100 Boxing Closet Classics (available on Amazon)” and the co-author of the upcoming book “Muhammad Ali: By the Numbers.” To contact Groves, use the email [email protected].