Carl Frampton: ‘I want to show that there’s still a lot to give’

Boxing at the elite level frequently comes down to the spin of a wheel.

After dethroning 126-pound titleholder Leo Santa Cruz by 12-round majority decision in July of last year, Frampton’s luck changed. In January, the classy Santa Cruz regained his title on points and a verbally agreed-upon third fight with the Mexican fell through before it could even reach the negotiating table. Frampton was irked by his first defeat but vowed to learn from it and come back stronger.

However, the luck of the Irish suddenly proved elusive for the former two-division titleholder.

In July, Frampton was scheduled to return against unheralded Mexican contender Andres Gutierrez. First, Frampton missed the featherweight limit by a single pound at the official weigh-in, forfeiting his chance to win a WBC title eliminator. Then the unthinkable happened. Gutierrez, upon returning to his hotel room from the weigh-in, slipped in the shower and smashed his own face in only hours before Frampton was scheduled to do it for pay. The fight was off.

Frampton, who is rated No. 3 by THE RING at 126 pounds, would ultimately settle upon former British, Commonwealth and European junior middleweight champion Jamie Moore as chief second. There are those who feel that Frampton will struggle to break in a new trainer after a career-long stint with the McGuigan family but the 30-year-old boxer-puncher insists that all has gone well.

“I found it very easy,” said Frampton in an interview with RingTV.com. “I gelled with Jamie and the rest of the boys in the gym instantly. I had a couple of other trainers in my head but I completely agreed with Jamie’s ideas and how I should be trained. There’s a lot of camaraderie around the gym. There’s no prima donnas and no dickheads. You can’t take yourself too seriously but we train hard and we’re happy.

“I’ve already got my style and I’m not going to change too much. It’s just about perfecting things and working on tactics for individual opponents. There has been a lot of repetition and a lot of hard work. Jamie has been taking me through drills of four or five different combinations that we can use in our next fight. Those will help me out and potentially we’ll get a stoppage.” 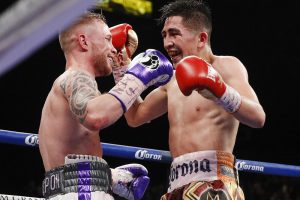 Does a trilogy loom between Frampton (left) and Santa Cruz (right)?
Photo by Esther Lin/ Showtime

The man Frampton will be looking to stop is one Horacio Garcia, who he faces in a 10-round homecoming bout at the SSE Arena in Belfast. Garcia (33-3-1, 24 KOs) is another respectable Mexican puncher who is considered safe for a fighter of Frampton’s caliber. At a lower level, Garcia has been having a field day but he has fallen short – way short – against former two-division world titleholder Hozumi Hasegawa and top contender JoJo Diaz.

“He fits the stereotype of a Mexican fighter,” said Frampton. “He comes forward. He’s brave. He takes a good shot. He punches hard. He punches long and he’ll be up for it. These guys don’t lie down easy but he hasn’t fought anyone like me and he hasn’t been in an atmosphere like the Odyssey (SSE Arena). Those things are in my favor. I’m the better fighter and I need to go in there and prove it.

“(Garcia) is getting a shot at the big time. If he beats me, a former two-weight world champion and THE RING Magazine Fighter of the Year, then he’s a big name. He can go on and demand big paydays. This is a huge opportunity for Garcia, so I’ll need to be switched on from start to finish.”

One of Frampton’s main assets is his versatility. He has excellent technical skills and quick feet but he can also mix it with the best of them. The Belfast star went hammer and tongs with Santa Cruz in the first fight but, in the rematch, his Mexican rival kept it long and picked him off at distance. That night, Frampton struggled to traverse back to the boxing skills for which he had become known.

So, what will we see on Saturday?

“I don’t know but I want to get back to using my skills,” said Frampton in earnest. “I want to show people the old Carl Frampton and remind them what I can do when I’m smart and up on my toes. I want to make fighters hit fresh air and counter them. I want to show there’s still a lot to give and I think I will.

“There’s always pressure but I’ve had pressure on me since the start of my career. Even when I was with Barry (McGuigan), he talked about how he believed I was going to be a world champion. People used to look at him as if it was too early to say that. There was always pressure heaped on me but I’m accustomed to it.”

Being honest, Garcia is the fight before the fight for Frampton. However, securing a world title shot early in 2018 might not be easy. Santa Cruz, the WBA titleholder, and Abner Mares are likely to have a rematch, while IBF beltholder Lee Selby is being positioned for a domestic clash with Josh Warrington.

However, according to Frampton, there are “whispers” that WBC titlist Gary Russell Jr. is considering a step up in weight, which would leave a title vacant and WBO titleholder Oscar Valdez is considering his own options.

“If the opportunity arises, I’ll be ready to fight for a world title in the spring,” said Frampton in earnest. “If I have to wait because other fights are being lined up, then I won’t turn my nose up at fighting for a world title at Windsor Park (national soccer stadium) in the summer. I would just have one more fight in between. But the ideal situation would be me going to Windsor Park as a world champion and defending a title.”

Irrespective of what lies ahead, an impressive Frampton victory on Saturday will put the  featherweight division on notice.

Tom Gray is a U.K. correspondent/editor for RingTV.com and a member of THE RING ratings panel. Follow him on Twitter: @Tom_Gray_Boxing