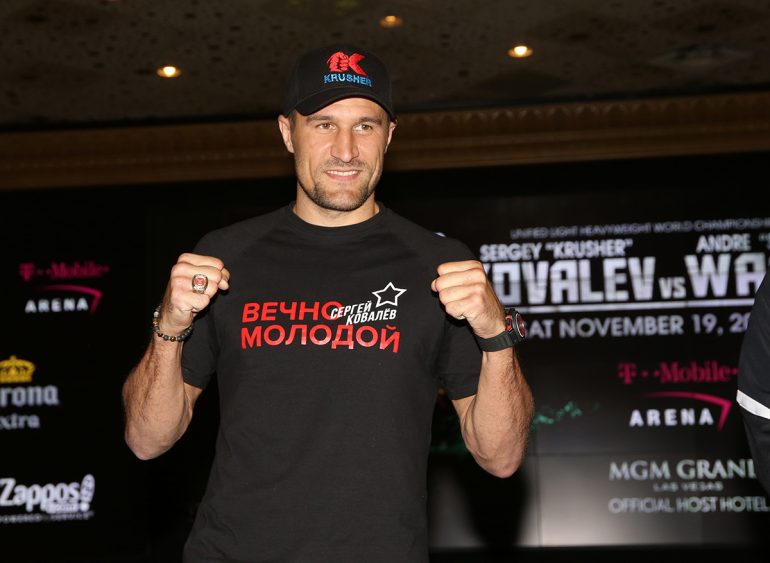 It is a time-honored cliche, that, when a boxer takes an L, or maybe two in a row, he looks for answers within himself and then outside and then makes changes, which might include dumping his trainer.

Sergey Kovalev lost a decision – along with his three light heavyweight title belts – to Andre Ward last year and then, in a sequel against the skilled and clever Oaklander, was stopped in round eight. He asserted that Ward, last June, had repeatedly battered the family jewels, which left Kovalev disabled.

Then, after a spell, after time spent looking inward and out, he reacted. Kovalev ditched trainer John David Jackson, with whom he’d been since before he reached a true level of prominence.

And the dumping wasn’t a mutual parting of ways, a “conscious uncoupling,” done with maximum kindness. Kovalev said Jackson really wasn’t much of a tutor and that, too often, he was left to his own devices. Jackson, a former 154 and 160-pound champ, burned a couple bridges in painting Kovalev as stubborn and sometimes lazy. Once he started winning and earning, Kovalev got sloppier, Jackson said, and camps got worse and worse. They scrapped over money, he said, as Kovalev sought to cut Jackson’s cut. Maybe the harshest cut came when Jackson, 54, said he was doing work with Sergey and dug to the Russian’s body and folded him up. Yes, this divorce was TMZ-ready, with Kovalev manager Egis Klimas telling a pressman that he thinks it’s possible that Jackson dosed Kovalev with sleeping pills before the Ward rematch.

So, those pages have been turned. Maybe some bitterness lingers and painful memories remain but Kovalev and his new teammates now look forward, publicly. He will seek to get back on a fast track, November 25 in New York, at the Madison Square Garden Theater. Now 34 (30-2-1, 26 knockouts), it is no given that a reset of corner-persons will restore Kovalev’s momentum. First of all, 34. It’s not in the bloom of youth, not just talking physically, because a man’s athletic peak can start dipping at 27 or so. But mentally, as well…once a fighter or any athlete has acquired champagne taste and then the means to indulge, that can dull the fires of ambition. Why wake up at 5 a.m. to do road work when the sheets are 1,000-thread count? Why train three times a day because, “C’mon, I have been there and done that and my accumulated wisdom allows me the luxury of not having to work as hard as I did on the way up.” Not saying this is the case for Kovalev but we’ve seen it before and will again.

On November 25, Kovalev will be in against Vyacheslav Shabranskyy (19-1, 16 KOs), who hasn’t excelled and climbed to the champagne station. The 30-year-old Ukrainian hitter lost in his step-up scrap, to Sullivan Barrera, last December. His hunger level could be at a higher station than Kovalev’s, who has enough banked that he doesn’t have to work again, as long as he doesn’t throw it away on Ponzi schemes or whatever.

I checked in with Kovalev’s promoter Kathy Duva, the sport’s role model for women excelling in the oft-sexist climate that is the boxing business world (hell, the world, period.) How is the trainer switch going for Kovalev?

“Sergey said, the other day, that he is very happy with him. He is much more comfortable hearing Russian in the corner. This guy trains a couple of other fighters from Eastern Europe and he has done a very good job with them. We co-promote one of them with Sergey’s Krusher Promotions, Bakhram Murtazaliev of Grozny, who will fight on the undercard on November 25th. He is very promising.”

Abror Tursunpulatov is the new chief second for “Krusher,” for the record.

Kovalev gave us this info via a low-key social media announcement: “I’m presenting you my coaches, Aleksandr Sedov, for physical training, and boxing coach Abror Tursunpulatov. I feel very comfortable to be working together and preparing for Kovalev vs. Shabranskyy at MSG in New York City. Hope our connection will bring us new success for my boxing career.”

Kovalev gets a little boost, perhaps, as we count down to the tango, which will screen on HBO, which is flurrying hard to close out the year. The vacant WBO title will be up for grabs. “Sergey is very happy about that too,” Duva told me. “Hitting the reset button. Starting over. Going after the WBO title, the very first world title he won back in 2013.”

That was still the come-up period, when, yes, we knew who Kovalev was, we hardcore, but the jury was still massing and hadn’t even deliberated on him. When he beat Nathan Cleverly in August of 2013, and acquired that WBO crown, he grabbed another batch of pundits who noted his power and patience and chin and promise. Today, the scouting report has changed because Kovalev comes in with back-to-back losses. Mentally, how has he handled those ego blows, not to mention the attack to the groin from Ward? Time tells…

During a recent conference call, Kovalev insisted that he is in a good place mentally, fired up and ready to rock. “Now this is like a new chapter in my boxing career. I am recharged. I am much stronger than last three fights and you will see November 25 in New York.” And interestingly, Kovalev isn’t one to go out on the limb and shout to the world that King Kong is back and has been training his tail off and will destruct and destroy all in his way.

When media asked if he considers himself the top dog in the 175 pound kennel, he replied, “Take your time. Let’s just see what will happen after next year. Right now, I have a focus on my next fight and I do not say that I’m the best. But I want to be the best. And I already have proved a lot of things to myself and to lot of people, to the boxing fans, that I can be the best. But the three last fights, it was something is wrong with me. Next fight and next year, I will show everything, who I am. But take your time. I’m working on it.”

Of course Duva is optimistic her guy, the Main Events centerpiece, while the company nurtures a new batch of younger guns, can return and still be that Krusher who was feared and respected, pre-Ward. “Sergey wants to win his titles back and continue trying to unify. So bring on all the new champions (and the one old one, if he ever decides to take the challenge). No particular order.”

And no particular guarantee, she knows in her heart, having run rodeos, since the 1970s. And that makes this next Kovalev bout, in which he should be a considerable favorite, that much more intriguing.