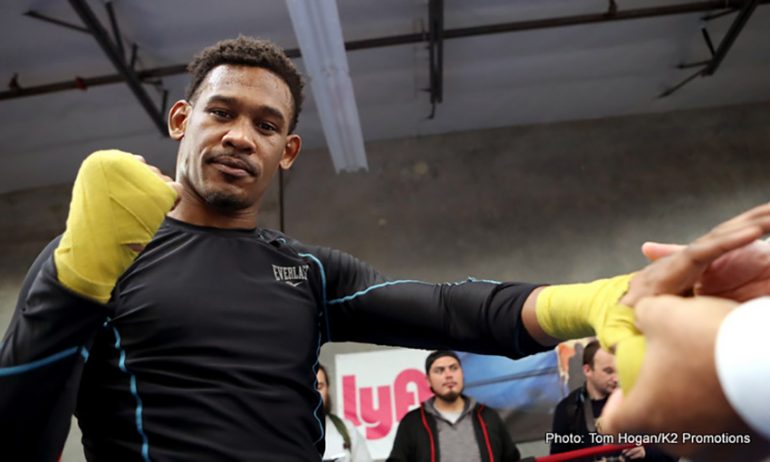 Back in March, Danny Jacobs graduated from being a compelling human-interest story — that of a gifted young athlete who nearly had his career, and life, snuffed out by bone cancer – to a certifiably important boxing story.

The night Jacobs went the distance with Gennady Golovkin at Madison Square Garden, and in the eyes of many, deserved to win the decision over perhaps the most feared boxer in his weight class since Mike Tyson was terrorizing 1980s-era heavyweights, was the night Jacobs shed the label of cancer survivor and assumed the label of elite middleweight contender.

If you had asked boxing fans leaving the Garden that night which of the two main eventers had the brighter future, the 30-year-old, rapidly rising Jacobs or the 36-year-old, and apparently fading, Golovkin, the answer would have been obvious: Although he lost the fight by unanimous decision, in many ways Jacobs won the night.

But in the eight months that have passed since that March 18 fight, Golovkin went on to an even more controversial battle, his disputed draw with Canelo Alvarez in September, and is already in negotiations for a rematch.

Meanwhile, Jacobs laid low. He took a victory lap, rested up a while, and eventually became the first, and so far, only signing for Matchroom Boxing USA, the American wing of U.K. promotional company Matchroom Boxing which is run by Eddie Hearn.

And for the first fight under their new association, Jacobs and Hearn chose to fight a rather nondescript middleweight at a most nondescript venue, the Nassau Coliseum in Uniondale, Long Island, former home of the New York Islanders and a building that had seen professional boxing only once in the previous 31 years.

Well, it turns out that Hearn did Jacobs no favors in their first outing, nor did Jacobs do much to advance his own cause.

Although he beat previously unbeaten Luis Arias in a lopsided 12-round decision – I gave him every round, as did Julie Lederman, one of the judges – the bout did little to promote Jacobs’ brand or enhance his reputation as either a middleweight contender or a ticket-seller.

Part of the reason was Arias, who despite talking a good fight in the weeks leading up to the bout, went into survival mode after he was wobbled momentarily by a first-round right hand. After the fight, Arias blamed his passivity on a blister he raised on his right foot early in the bout, but the truth was, he seemed determined to avoid injury at any cost.

Another part of the reason was the decision to have Jacobs fight out on Long Island, some 25 miles from the Brownsville, Brooklyn neighborhood where he grew up, rather than in the Barclays Center, where he had scored his biggest win as a pro, his first-round KO over Peter Quillin in 2015. Away from his turf, the Jacobs-Arias card drew just 6.921 to a building that can hold more than 12,000.

And part of the reason was that the eight months of inactivity had left a thick coating of rust on Jacobs, who was tight and tentative early in the bout, and when he opened up in the second half, tended to be wild and sloppy. He showed good hand speed, as always, but rarely landed cleanly and other than the first round, never really hurt Arias.

But the wide class difference between the two fighters was evident and there was never any doubt about who would win the fight. Jacobs won 10 rounds on one card, 11 on another and all 12 on Lederman’s. He was also credited with a knockdown in the 11th round, but in truth it was more of a push/slip from a combination left forearm and glancing right to the top of the head. 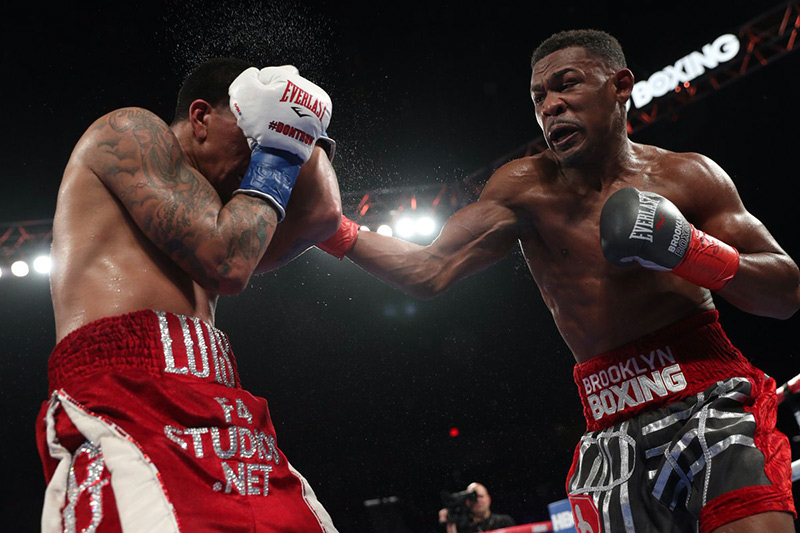 Still, both Jacobs and Hearn professed to be overjoyed with their first foray. “A big night, a successful night,’’ said Hearn, who as part of his sales pitch to Jacobs negotiated a three-fight deal for him with HBO, of which the Arias bout was the first. “Danny Jacobs is a level above most of the middleweights in the world. He’s one of the big three: Canelo, Golovkin, Jacobs.’’

“I’m in a great position now,’’ said Jacobs, whose record improved to 33-2 (29 knockouts). “Now I’m the scorpion of this division. I’m the most avoided middleweight in the world.’’

The question remains, however: Where does Jacobs go from here?

While the Jacobs-Golovkin fight did wonders to raise Jacobs’ profile among boxing fans, the Canelo-Golovkin fight may have done nearly as much to set back his career progress.

Now, his dream of a Golovkin rematch or a showdown with Canelo must be put on hold while those two take a do-over on their first bout, which is still in the negotiation stage.

And aside from the winner of Canelo-GGG II, there doesn’t seem to be a lot of options right now for Jacobs, especially after listening to Hearn at the post-fight news conference.

Asked who he would like to fight next, Jacobs said, “How do you name a number-one target in a division with so many great contenders and champions?’’

But he and Hearn then proceeded to downplay most of them.

Jermall Charlo? “I want to fight the very best and Charlo just moving up to the middleweight division, some would say he has a lot to work for,’’ Jacobs said. “Some would say he hasn’t really proven anything yet. But I definitely would give him a shot.’’

Martin Murray? “I’m not sure if he makes sense. I respect him but we want fights that will take our careers to the next level, not fights people expect us to win,” Jacobs said.

A boxing insider said that Jacobs had previously turned down Charlo as a possible opponent after the Golovkin fight, as well as Sergey Derevyanchenko, a Ukrainian-born, Brooklyn-based middleweight who is unbeaten in 11 pro fights.

Hearn seems to have his sights set on the winner of the Dec. 16 fight between Englishman Billy Joe Saunders, the WBO champ, and David Lemieux in Montreal. He and Jacobs plan to go to the fight. But there are obstacles to that one, as well. For one thing, Saunders, the favorite, is promoted by Frank Warren, Hearn’s bitter rival in U.K. boxing.

“We haven’t got the best relationship,’’ Hears said, “But I’d still work with Frank Warren.’’

He also implied that Saunders’ contract with Warren was about to expire.

However, there is another potential problem; Tom Loeffler, Golovkin’s manager, told me that if a deal for the Canelo rematch was not reached by early December, he and Golovkin would also head to Montreal, looking to fight the winner.

That would make Jacobs’ next opponent a mystery man, although Hearn said Jacobs would definitely fight again in April, and this time at the Barclays Center.

“There was a little lack of noise here compared to a U.K. crowd,’’ he said in regard to the Coliseum audience.

Hearn said he believes the Golovkin fight should have made Jacobs one of the highest profile boxers in the world.

“He’s nowhere near the size of the star he should be off that performance,’’ Hearn said. “He should be absolutely mobbed on every street in New York City. But he didn’t have a promoter behind him. He’s got one now.”

“These last three months is the most promotion I’ve ever had in my career,’’ Jacobs said. “This is going to catapult my career to the next level.’’

Back in March, it seemed as if Danny Jacobs had already done that. Now, it looks like he might have to do it all over again.