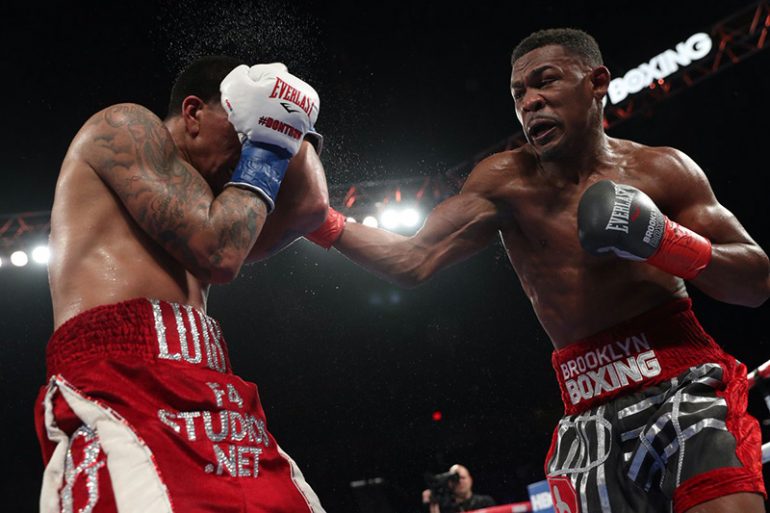 LONG ISLAND, New York – When the promotion kicked off for the November 18 HBO card headlined by Danny Jacobs and Luis Arias, Arias dared Jacobs to fight him toe-to-toe and not run away. not run when the bell rings.

For twelve rounds it was Arias who was trying to keep away from the sharper, stronger Jacobs, making it to the bell largely because he had employed a negative strategy of backpedaling and holding to limit the damage he absorbed.

Arias (18-1, 9 KOs) was stunned in the first round by a quick counter right hand from Jacobs and took few chances from that point. Jacobs did much of his good work to the body but was not able to string too many shots together in what was essentially a bad sparring session.

Jacobs, 30, scored the fight’s lone knockdown in the eleventh, a questionable call on a left hook which glanced off the top of Arias’ head and caused him to put a glove on the canvas.

“Much respect to Luis Arias and his team but I did go out there and prove the point that I wanted to prove, which is that there’s levels to this game,” Jacobs of Brooklyn said afterwards.

“I really felt that when I hurt him in the first round, that was kind of a gift and a curse. Honestly, I wanted to go for the knockout, not just because I knew I could hurt him but because of all of the stuff that he was talking.”

It was Jacobs’ first fight since signing with British promoter Eddie Hearn of Matchroom Boxing, which was promoting its first fight card in the United States. Hearn said Jacobs’ next fight would be in April in Brooklyn, but did not settle on a single name or scenario.

“In an ideal world, he’d fight Golovkin next. If that was available and the [Canelo Alvarez] rematch didn’t happen, maybe we’d do that. If not, we’d like to fight the winner of [Billy Joe] Saunders and [David] Lemieux. If we can’t do that, maybe fight [Jermall] Charlo. If we can’t do that, maybe we’d fight someone else,” says Hearn, who emphasized that Jacobs wouldn’t be just waiting around for a call from one of the top middleweights.

“This is about building Danny Jacobs into a position where the fight is unavoidable for the likes of Canelo and Golovkin. We’re not sitting out here saying ‘Hopefully we get a shot against these guys.’ No disrespect to Lemieux or Saunders; I see Danny Jacobs on a whole new level to these guys.”

Arias, who is promoted by Roc Nation, said he couldn’t “get off” and complained of leg pain from early in the fight, adding that he couldn’t deal with Jacobs’ size.

“Jacobs fought the smart fight, he controlled his distance good, used his size very well, he was quick, he was strong and he was fast,” said Arias, 27, of Milwaukee.

“He was a lot smarter than I thought. Usually Jacobs gets careless; part of me wanting to talk it up was to make him get careless.”

Arias’ trainer John David Jackson took it a step further, saying “it wasn’t a fair fight” due to Jacobs’ size.

“Danny weighed 159.6 yesterday, but he wouldn’t step on the scale today. Why? Because if you look at him he was about a cruiserweight,” said Jackson.

Jacobs brushed off any notion about unfair advantages.

“I make middleweight and I’m probably the biggest middleweight because I skip leg day. My legs are so skinny at the bottom and I’m big up top,” said Jacobs.