Jarrell Miller wears down Mariusz Wach, stops him in Round 9 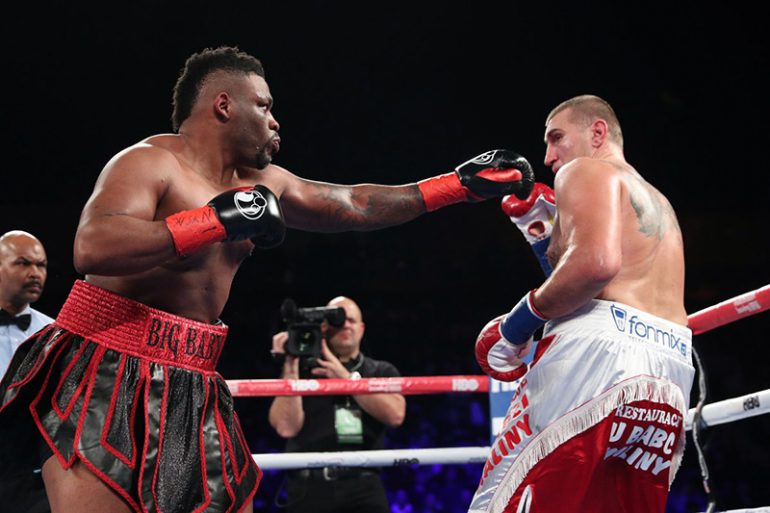 UNIONDALE, N.Y. – Jarrell Miller became the second man to stop Mariusz Wach in a heavyweight, (truly, a heavyweight scrap) which was the chief support bout to the Danny Jacobs-Luis Arias middleweight main event, which ran on HBO.

“Big Baby” Miller was busy, and looked to grind down the massive Pole, who had the docs looking hard at him after round eight. The Brooklyner sought to work the body, outwork the older man, and flurry periodically when he deemed Wach buzzed at the Nassau Coliseum. In round nine, Miller was being the busier pugilist and then the docs saw body language from Wach they didn’t care for, and waved off the tango. We heard after that he complained of a busted hand.

The outing wasn’t embraced unanimously by ringsiders. Some busted on Miller’s power and wondered why he didn’t seem to get out of second gear. Others opined that Wach was, on paper, his sturdiest foe, and in fact Miller damaged him earlier more than Alexander Povetkin, who beat Wach via a cut stoppage in 2015, did.

Brit Eddie Hearn was the lead promoter, in his initial American outing, this after signing Danny Jacobs to his Matchroom stable.

The 29-year-old Miller offered his take on his effort after. Miller said he was too light, and he did too much cardio, and not enough weights in camp. The victor said he was walking Wach down and he had to adjust to his height.

Miller (now 20-0-1 with 17 KOs) has a growing fanbase, and for good reason. His personality is glowing and inviting, and he can rep an America which features a majority of folks who like to eat. He was 283.4 pounds on Friday, trimmer than he’d been in other bouts, and besides, he wears that poundage very well. “I’ve been off cheeseburgers for this camp, because I respect Wach” (now 33-3), he told us at the Thursday press conference. The Brooklyn-bred XXLer and Wach (268 on Friday) were quite cordial in the lead up, though the Pole, who told me he is at his athletic peak at age 37, promised a “brutal” fight and that there would be blood at the presser.

In the first, Miller looked to establish a jab. He ate one left hook, from Wach, but was generally in a get warmed up mode, scouting mode, seeing what he had to contend with, gauging hand speed and stance and movement.

In the second, Wach was busy with his right. Busier, period, until the last half of the last minute. Then they were trading. The crowd dug it, enjoyed the pace and bomb throwing. Left hooks from Wach, two or three, landed.

In the third, Miller worked harder to start. He wanted to hurt him to the body, and mixed speeds smartly. Aggression and work rate gave BBM the round.

In the fourth, Wach was backing up to start. The volume edge and power edge was Miller time. Rights from Wach perked the crowd with a minute left. Miller’s body work was a long term strategy; would it pay off?

In round five, we saw Miller advancing. He flurried hard on Wach, caught in a corner. The crowd surged. BBM works in tight, and can do so because he’s confident in his chin. The crowd appreciated their late inning trading.

In the sixth, BBM again came out busy, pressing forward, working low, low, low, then high. Wach worked that right again, and Miller wasn’t too worried about the power.

In round seven, Miller felt in total control. He’d bang, go low to the body, fire at half speed, then ramp it up, flurry harder.

In the eighth, Wach hung tough, but ate uppercuts, and then came with a sneaky right. Miller won another round, but we heard some boos now. To the ninth; the docs stopped it. The crowd didn’t comprehend why. The end was 1:02, via TKO.

All in all, it is likely that Anthony Joshua didn’t watch the win and quake in his boots and come up with a plan to avoid Miller. Team Miller will note that they did something no one else has done, their guy was busy and he stays unbeaten.