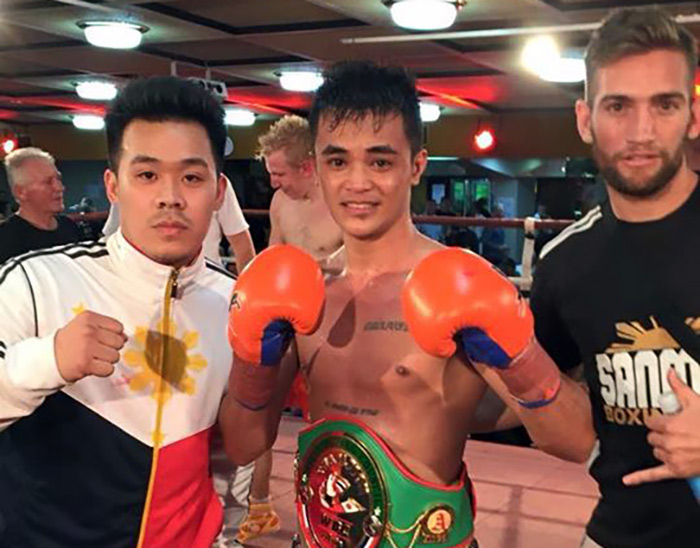 Filipino prospect John Vincent Moralde will make his United States debut when he faces Toka Clary Kahn on December 1 in a 10-round featherweight bout at the Strand Ballroom and Theater in Providence, Rhode Island.

It’ll be a firm measuring stick for where the unbeaten 23-year-old is at in his career after accruing a 19-0 (10 knockouts) record over six years as a pro. The show is promoted by Evander Holyfield’s Real Deal Promotions, which handles Clary, and will be televised by CBS Sports Network.

Moralde is in tough for the first time against Clary (23-1, 16 KOs), a southpaw who is rated number 14 by the WBA at 126 pounds and has won four straight since his lone defeat, a first round knockout to Moralde’s compatriot Jhon Gemino in September of 2016.

“I’m so excited because it is my debut fight in America,” Moralde, a veteran of 300 amateur bouts and a three-time national gold medalist, tells RingTV.com. “So that’s why I want to prove that Filipino boxers are strong and great boxers.”

Moralde, a native of Davao City, Philippines has been in Miami training with Osmiri “Moro” Fernandez in Miami since July, rounding out his style in sparring against Yoandris Salinas, Walter Castillo and Harmonito Dela Torre, his stablemate from the Sanman Gym in the Philippines.

He’s reconfigured his training methods since working with the Cuban coach, sparring less frequently in more instructional sessions. He expects to be a better fighter than he’s shown in the past, when he’s had uneven performances, like when he barely hung on to his unbeaten record after fading late and being dropped by Jimmy Aducal in a split decision win in April of 2016.

“I feel good and strong now. Maybe more stamina and more tactics. Like dirty tactics,” he adds with a laugh.

Moralde’s promoter Jim Claude Manangquil is hoping a win on national TV builds demand and interest for one of his top prospects.

“This will be a big opportunity for John Vincent Moralde. This is the fight that could put him in a world title shot if victorious,” said Manangquil.