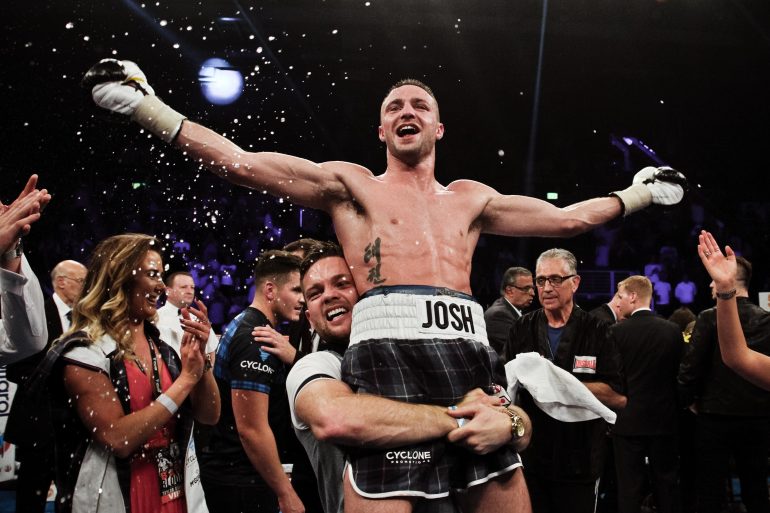 EDINBURGH, Scotland – The 140-pound division is on notice.

Talented junior welterweight Josh Taylor put on an impressive display in front of a raucous home support, scoring a ninth-round knockout over former lightweight titleholder Miguel Vazquez at the Royal Highland Center. The official time was 2:30.

Taylor, who is rated No. 10 by THE RING at 140 pounds, survived a cut left eye to dominate almost every session and then closed the show with a brutal right hook to the body from the southpaw stance. Vazquez never attempted to rise from the canvas and instead knelt throughout the referee’s count with his head bowed in surrender. It was the first time the Mexican had ever been stopped.

“(Vazquez) was very experienced and he was very tough,” said Taylor (11-0, 10 knockouts). “He caught me with a few good shots when I switched off and I shouldn’t be switching off. Later in the fight, I started catching him to the body and the first really clean body shot I landed did the job.

“I’d like to fight Anthony Yigit for the European title before I move on to fight for a world title. I think that would be a really good belt to get.”

The Scotsman, being the natural junior welterweight, looked the bigger man when the pair faced off during the referee’s instructions. Consequently, the home fighter felt confident enough to take center ring and do most of the leading. Vazquez, a known spoiler, did his best to interrupt Taylor’s rhythm and timing.

After getting off to a good start in the second, Taylor, 26, was cut above the left eye following a clash of heads. The wound seemed to distract the home fighter as he came out blazing in the third and left himself open to one or two counters.

Vazquez (39-6, 15 KOs) wasn’t in Scotland to make up the numbers, but Taylor’s aggression was enough to give him the edge on the early sessions.

There was some strong power punching from Taylor in the fifth. He tagged Vazquez with a series of big left hands but was unable to put a serious dent in the Mexican. Relying on his vast skill set, Taylor tried a bit of everything; he switched to orthodox, varied the power in his assaults to set up big shots and used his feet to locate angles. Still, Vazquez located the escape routes.

However, at the midway point Vazquez, 30. began to look jaded. Taylor’s youth and tenacity was beginning to break him down, although there was still every possibility that his experience would get him to the finish line. It was not to be and Taylor’s finishing shot in Round 9 was world class.

The Edinburgh man possesses superb skills, rapier fists, quick feet, power at the weight and all of that is juxtaposed alongside a spiteful attitude in the ring. In his previous outing, Taylor took the hard-hitting Ohara Davies to school, easily stopping the enigmatic Londoner in seven rounds. That was regarded by many as a 50-50 fight, but Taylor looked levels above.

Vazquez has had his kicks and one would think this defeat may signal the end. The Mexican veteran turned professional in 2006, losing by four-round split decision to one Saul “Canelo” Alvarez, who was in his third fight. Vazquez paid his dues, eventually claiming the IBF 135-pound title in his 29th fight before making six successful defenses. A split-decision defeat to Mickey Bey, in September 2014, signaled the end of his reign.

For Taylor, the sky continues to be the limit.