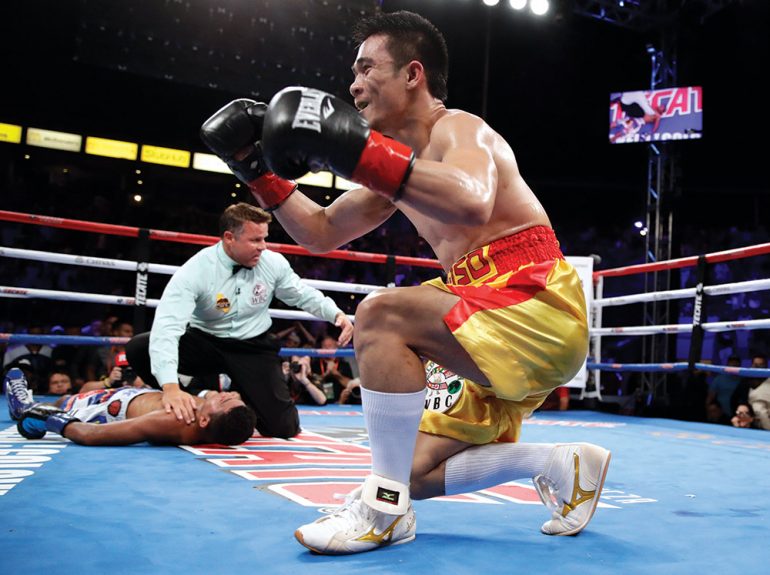 Superfly was a resounding success in September, so it’s no surprise that a second HBO card featuring only 115-pounders is on the way.

Srisaket Sor Rungvisai, who authored a shocking one-punch knockout of Roman Gonzalez in the main event of that card, will headline Superfly 2 as well. The Thai native will defend his title against Juan Francisco Estrada on February 24 at The Forum in Inglewood, California.

“Juan Francisco Estrada is definitely among the top-class fighters in our division,” said Rungvisai (44-4-1, 40 knockouts), whose birth name is Wisaksil Wangek. “When someone is a former unified champion that moved up without losing his titles, you know he is a world-class fighter in his prime.

“However, I am confident that I will be successful in this fight because I will be at my best on fight night again. We will give the fans an incredible fight and I plan on another impressive win.”

The 30-year old broke out in 2017 with a controversial decision defeat over Chocolatito in March before he left no doubt in the second meeting. Estrada, impressed, too.

The Mexican held two titles one weight class south, but made his mark at 115 pounds with a thrilling decision victory over Carlos Cuadras in the Superfly opener.

The hard-nosed 27-year-old packs a big punch, and is always good for an entertaining scrap. So Rungvisai and Estrada are being counted on to surpass the terrific first card.

“He will be a difficult challenge as he defeated Roman ‘Chocolatito’ Gonzalez twice in a row with a vicious KO in their last fight,” said Estrada, 27, who was outpointed by Gonzalez in 2012 at 108 pounds. “Sor Rungvisai is a very tough and skilled boxer so I will have to prepare very well to be ready to challenge him for his belt.”

The September card was action-packed, save for Naoya Inoue’s shellacking of lightly regarded fighter Antonio Nieves. But the Japanese wunderkind’s talents were on full display, and the other two bouts were scintillating.

Estrada (36-2, 25 KOs) and Cuadras waged war in a bout that featured multiple momentum shifts, punctuated by Estrada’s dominance down the stretch. And then Rungvisai toppled Gonzalez with a highlight-reel fourth-round knockout of the former pound-for-pound king.

Loeffler said he’ll push for a tripleheader once again, but the promoter needs the financial commitment from HBO. If he secures the network’s blessing, there’s a plethora of top 115-pounders to choose from.

“Whenever you can do that to Chocolatito, that’s a big statement,” Loeffler said. “And the way Estrada dominated Cuadras, that was a big statement as well. … Estrada showed his technical abilities and where he’s at.

“So I think when you match up those two winners, it’s a mini tournament, but there’s so much talent in the super flyweight division, you can mix and match all those guys in the small divisions and you’re going to get exciting fights with all of them.”

The Los Angeles-based promoter singled out Gonzalez, Inoue (“he became a fan favorite overnight”), Englishman Khalid Yafai, who holds the WBA strap, the Puerto Rico-based Arroyo brothers, Jerwin Ancajas (the IBF titleholder) and even Johnriel Casimero during an interview with RingTV.com in October.

Clearly, there is ample opportunity to produce several episodes of the series, and why not? Loeffler loves that it keeps the fighters on the same schedule and available for the best matchups. And most importantly, the 115-pound division offers some of the best entertainment bang for buck in boxing.

“Unlike too many of the other divisions, they’re willing to fight each other,” he said. “They’re not holding out and saying they need an undefeated record, they’re willing to go in tough fights; they know because they’re in that smaller division they have to put on more exciting fights than if they were in the heavyweight or middleweight division.

“We would like to run with it as long as it’s feasible. The (Rungvisai-Estrada) winner cold fight Inoue or Yafai. (The super flyweights) have really captured the fans’ attention.”