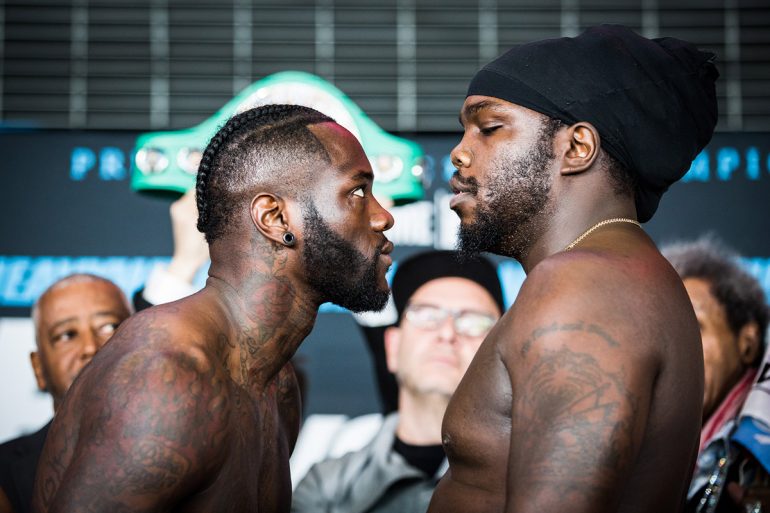 Deontay Wilder and Bermane Stiverne stepped on the scale Friday, the day before their sequel scrap will unfold at Barclays Center in Brooklyn and on Showtime.

Wilder (220.75 pounds) looked ripped and ready to rumble, composed and fired up, seemingly letting the frustration at his bum luck, being matched with PED positive foes, bubble over.

Stiverne (254.75) didn’t look as ripped; he showed a hint of a six-pack, but one that needed another month of roadwork and will-power exerted at the dinner table. He was the same weight in his last outing, two years ago, when he was neck-and-neck with Derric Rossy, now retired. And he was 239 when he met Wilder in January 2015.

Stiverne trainer Don House told me there’s no cause for alarm or dismay. “He’s focused,” the Las Vegas-based tutor told me. “I wanted  him bigger. He can carry that weight.” Yes, House said, Stiverne did ample roadwork leading to the follow-up fight with the Alabaman.

House said he’s detected over the last couple days worried faces among Team Wilder. “Promoter Lou DiBella said we have nothing to lose. That Bermane is powerful and it’s a dangerous fight for them when you are in front of a man that has nothing to lose!” Stiverne is 39 and some wonder if this is his last stand, his last effort at grinding on to a spot where opportunity knocks. Not House. He maintains he is confident. “Trust me. If he was 30 percent more in the last fight, it would have been a different fight.”

Another jumbo rumbler, also promoted by Don King, the OG dealmaker, who at 86 is a part-time plugger but still the life of the party when in town, is Eric Molina.

The 26-4 Texan told me he had just two weeks’ notice, not counting fight week, that he’d be fighting Dominic Breazeale in what was just announced as a title eliminator by the WBC. Molina insists he’s 100 percent mentally and physically. And what does he think of 18-1 Breazeale? “He likes to use his size. I think he beats smaller tough guys that try to outmuscle him.” At 240.4 to 255 for Breazeale, maybe you get a sense of how the 6-foot-4 Molina will try and tame the 6-foot-7 Breazeale. The Texan is the vet here, age 35 to 32 for Breazeale, who likely owns a power edge. Molina is likely cognizant that there are not infinite windows of opportunity as he edges closer to 40.

The most fire and fury was thrown off by 6-0 Brooklyner Chris Colbert and 7-0 Long Islander Titus Williams. This is a young gun faceoff between 126-pound prospects, an early crossroads scrap. The stakes were made clear as the two yapped and then exchanged shoves after weighing in. For more than a few in attendance Saturday, this off-TV clash will be their main event.