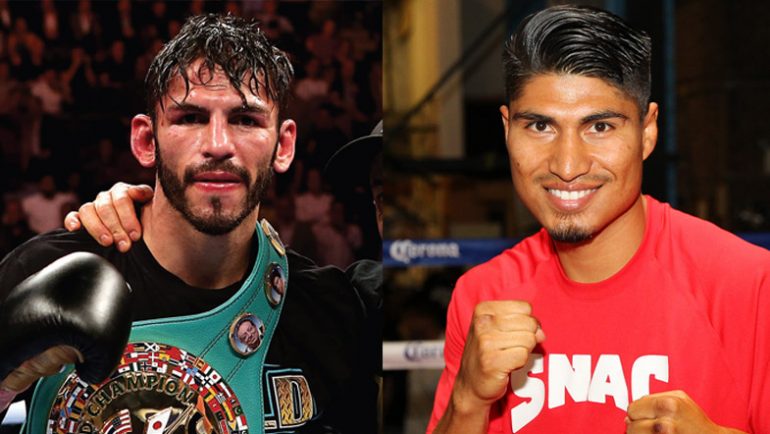 Is the lightweight dream match between Jorge Linares (left) and Mikey Garcia once more in the works?
30
Oct
by Michael Woods

A collision between lightweight titleholders and pound-for-pound aces Mikey Garcia and Jorge Linares would be a highly anticipated clash if and when that tango gets made.

We all heard that talks were on, and then that Mikey backed off, because he didn’t want to get embedded into anything other than a one-and-done with Golden Boy Promotions, who handles Linares.

Garcia is well known as an independent contractor, who wants freedom to pick and choose who promotes his scraps. He’d been a Top Rank mainstay, then had an acrimonious break up with the Top Rank outfit. Folks questioned his desire to fight, but, he explained, he was not ambivalent about battle, but when choosing his terms. Garcia sat between 1-14-2014, when he beat Juan Carlos Burgos, and 7-3–2017, when he came back to the squared circled and downed Elio Rojas. The 29 year old with a 37-0 mark on many folks’ top ten and top five pound for pound lists, then got Ws over Dejan Zlaticanin and Adrien Broner, who he handled with relative ease.

Linares, on paper, looks to be a tougher out than Broner. He’s 32, is the Venezuelan, and he holds the WBA lightweight strap, having defended it last on Sept. 23, when he scored a SD12 over Brit Luke Campbell. He suffered a severe hiccup attack in 2011, when he got stopped by Antonio DeMarco, and then lost his comebacker five months later to Sergio Thompson. His chin had been checked and wrecked…but he rebuilt, and rebooted. He’s been feasting on Brits mostly of late, but Mikey, in his prime, on the ascent would be his stiffest career test.

So, could this thing happen? It looked like we got closer to yes when we saw a Tweet from Golden Boy executive Eric Gomez, indicating that options are a no fly zone, it can be one and done.

@mikeygarcia if you are serious about wanting to fight @JorgeLinares call me. No options, no extra fights. Straight up #noexcuses

His public statement there shouldn’t raise eyebrows; Garcia had publicly made clear he didn’t care for a proposal that he sign on with Golden Boy for a few fights.

That was a couple days ago, and Gomez said yes indeed, the GBP and Garcia teams have been rapping. “Talking only, we will see,” Gomez said. “I’m trying my best to make it. I don’t want any excuse to kill it.”

A Team Garcia spokesperson said when asked if there is anything to report about Garcia-Linares. “We’ll let you know something when we can.”

Your thoughts, readers? You dig this pairing? Style-wise, a good coupling? Talk to us!