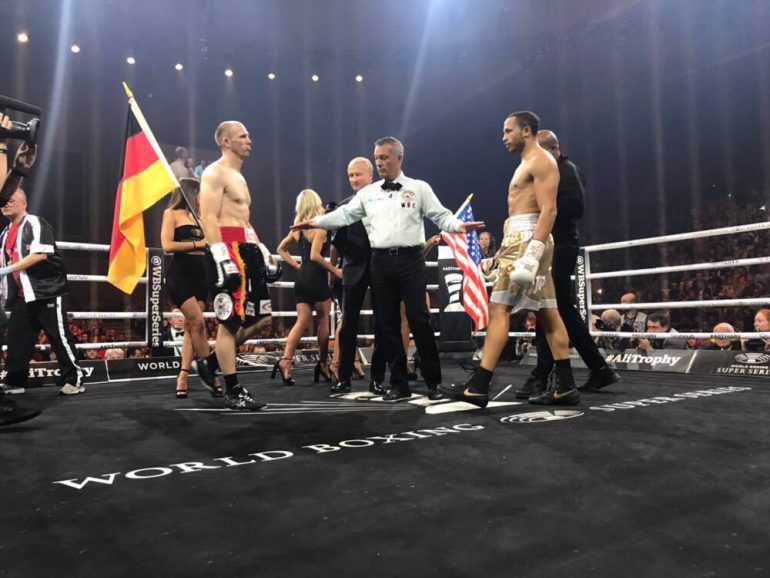 Braehmer (left) and Brant come to the center of the ring. Photo by WBSS
27
Oct
by Tom Gray

So, the move down worked out a lot better than the move up.

Former light heavyweight titleholder Juergen Braehmer returned to the super middleweight division to score a dominant 12-round unanimous decision over the previously unbeaten 160-pound contender Rob Brant at the Sports and Congress Center in Sherwin, Germany, on Friday.

There were no knockdowns and neither man was seriously hurt in the fight. Braehmer (49-3, 35 knockouts) now advances to the semi-finals of the World Boxing Super Series where he will meet unbeaten Englishman Callum Smith.

“I showed what I can do at 39 years of age,” said Braehmer during his post-fight interview with ITV Box Office. “I had to work really hard to come back from injuries. I had problems with my back and a muscle tear. Doctors told me I would have to work very hard to come back and that’s what I did.”

Braehmer, not surprisingly, looked much bigger at the opening bell. He also looked sharp for a man coming off a 12-month layoff. In Round 1, the German southpaw scored effectively with singles and doubles, although Brant probably evened up the session by being more aggressive.

As the rounds progressed, however, Braehmer began to pull away. He tagged the American with the southpaw jab and speared home the left hand regularly. The success only increased and even though Braehmer’s nose was bloodied and damaged by a big right hand in the fifth, he was the man marching forward with gusto.

Brant’s weight was frequently over his front foot when he missed the target and that allowed the German veteran to pick him off with sharp counters. Braehmer needed no second invitation and produced a highly impressive and polished performance.

What’s also impressive is that the quick-fisted lefty hadn’t competed at super middleweight for over 10 years.

Brant (22-1, 15 knockouts) wasn’t favored to win the WBSS tournament, but he and his team were very confident of producing the goods. However, the American’s detractors said he was too small and inexperienced which proved to be the case. Brant was taken to school by a stronger and more seasoned operator.

All quarter final bouts of the super middleweight and cruiserweight tournaments are now complete. The semi-finals stages are scheduled to begin in early 2018.