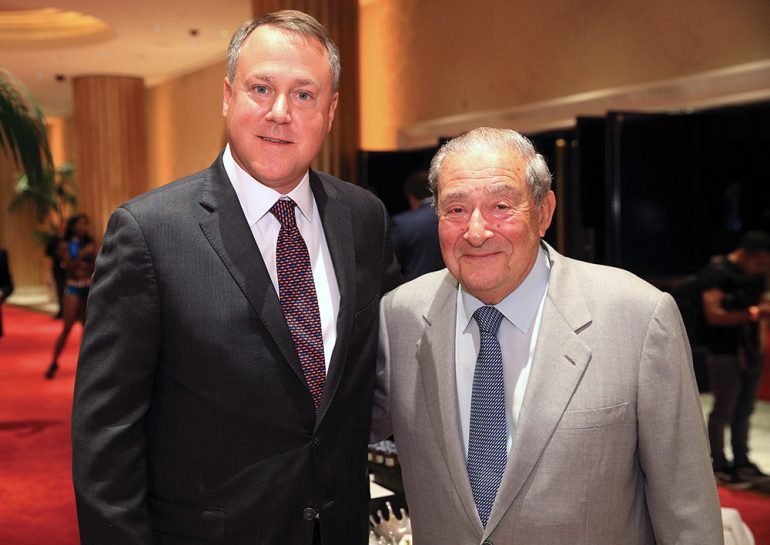 The ebullience coming from the voice of the 85 year old was immensely uplifting.

“Everything is great, it’s all coming together, Todd (duBoef, Top Rank executive) had a big meeting with ESPN, thank God, they’re so enthusiastic,” Bob Arum said on a Thursday night phoner.

From bossman John Skipper on down, Arum said, the ESPN folks are so pleased with the product, because, he told me, they like the freedom to move and do different things, because the freelance nature of boxing allows that.

“I think the reason is with the other team sports, they limit what a broadcaster can do, and with us, there are no limits. As long as they don’t extend or curtail a round! We can do anything they want.”

Yes, it was uplifting to hear, because, I remind you, ESPN has NEVER pushed the sweet science this hard and up front, and also, c’mon, he’s 85 and still kicking ass and not even bothering to take names.

The Top Rank crew is looking toward the Nov. 11 event, in Fresno, which runs on TWWL, topped by Juan Carlos Ramirez-Mike Reed, and then the anticipated Dec. 9 clash of Olympic gold medalists, the two A-plus grade pugilist-specialists, Vasyl Lomachenko and Guillermo Rigondeaux, doing their chess match of contained violence in NYC.

But Arum is a frequent flyer, not one to sit back and let moss grow. He will fly to Brisbane Sunday night, and iron out details for the next Jeff Horn fight. The WBO 147-pound welterweight champ, you recall, over-delivered to those expecting Manny Pacquiao would toy with him this summer, and he won a stunner decision from Pacman. Arum said that on Dec. 13, Horn, with whom Top Rank has options, in concert with his Aussie deal-maker, will tango with Gary Corcoran, a 17-1 Brit who Arum said is a “tough kid, a real scrapper” who is a “perfect opponent for Horn.” And “ESPN will show that also” the Las Vegas-based fight hype-man told us.

As for Manny, Arum said my guess is as good as his whether Manny fights again. “I’ve been communicating with him and (wife) Jinkee and he’d love to fight again but he can’t find the time to train,” Arum said of the fighting Senator from the Philippines.

Arum isn’t in a bad place; Top Rank promotes two of the top 5, or top 3, fighters on the planet, in Terence Crawford and Lomachenko. Arum is thinking that Horn beats Corcoran and then he can slot Horn in to fight Crawford, coming from 140, in March, or maybe April. There is a hold, he said, for March 10 at the MGM Grand in Las Vegas, for the Horn welterweight title defense.

January will be a dark month for Top Rank on ESPN, for the record, but February, things will pick back up. Gilberto Ramirez, the 36-0 super middleweight who holds the WBO strap, will defend versus 26-0-1 Ghanaian Habib Ahmed. Also, fan friendly rumbler Ray Beltran will likely glove up and vie for a vacated lightweight crown on Feb. 3 as well.

There’s more Top Rank doings…Arum and company co-promote WBO heavyweight champion Joseph Parker, who in his last outing engaged in a dreary waltz with Hughie Fury. He scored a decision, but needs an emphatic win to restore momentum, and just might be pushed into a decent rumble with badass bar-brawler sort Lucas Browne. “I talked to the promoter, our partner in New Zealand, and they want to do a fight after the first of the year, Parker against Lucas Browne,” Arum said. “That should make for a good fight,” said Arum, who allowed that the Parker-Fury fight “stunk.”

“Hopefully that will be televised by ESPN, at whatever the hour! Whatever the hour is, there is an audience for boxing,” he said, still jazzed from the response to the Ryoto Murata middleweight title victory over Hassan N’Dam, which scored 230,000 viewers during breakfast time in the U.S. this weekend.

And, down the line, Arum can see Parker being challenged by Philly fighter Bryant Jennings, restoring is momentum as a division player, and next lacing up Dec. 9, in NYC.

I finish with a reminder; ESPN has never pushed the boxing product this hard. People can talk about subscription drops, but my guess is that the Bristol gang does indeed continue the partial pivot to be more nimble and place content where it will be found by the masses. That push correlates nicely with the willingness of Top Rank to work toward platform partnerships that factor in likely viewership tendencies in five, and ten years down the line. It’s a pretty damned decent time to be a fight fan.