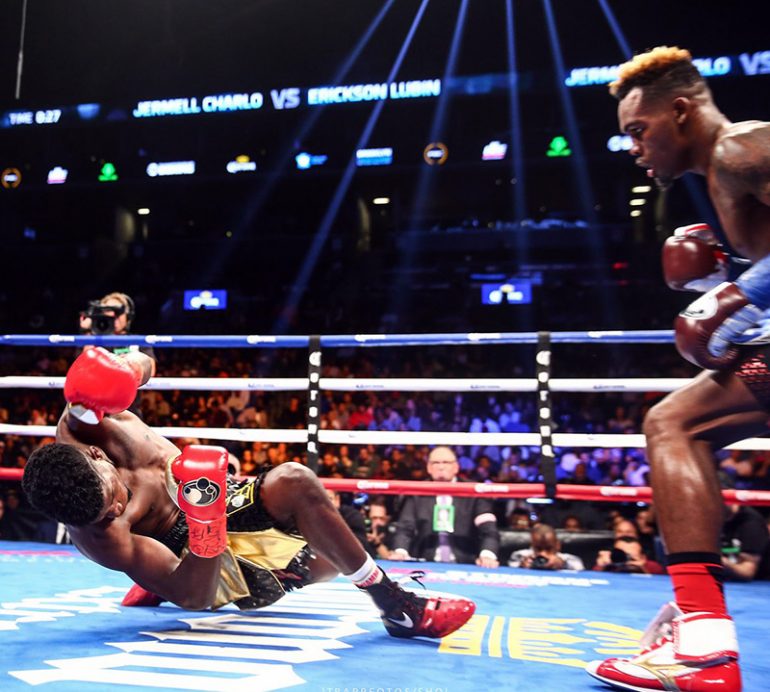 BROOKLYN, N.Y. – The Showtime tripleheader was topped by Erislandy Lara-Terrell Gausha, but the real main event in the eyes of most media and a good deal of the assembled at the Barclays Center Saturday night, pitted Jermell Charlo against Erickson Lubin, young gun against younger gun, two undefeated risking their precious “0.”

Charlo, out of Houston, Texas, was 29-0 with 14 KOs, though he’d been on a tear after hooking on with Derrick James, four fights ago. Lubin, a genial sort, had some whispering in the lead-up that maybe, at 22, with a 18-0 mark, he’d bitten off too big a bone to chew through.

They would be right; a right hand in the first sent Lubin down, and his limbs were mummified. At 2:41, a TKO was called, because the ref didn’t need to finish the count. A right exploded on the right side of Lubin’s chin as Lubin leaped forward.

Charlo, 27, was proud to hold the WBC 154-pound title, grabbed in May 2016, when he beat John Jackson and collected the then-vacant strap. He’d defended in April against Charles Hatley and stopped him out hard and fast.

Lubin, 22, who eschewed a possible Olympic goal for the more concrete capitalistic avenue, had people shifting their predictions fight week as they looked in his eyes and saw an iron will.

In the first, it was all she wrote, when a right hand dropped and stopped the loser.

Charlo looked angry and ranted and raved after, as his pride bubbled and burst out, his aggression kept erupting. To Jim Gray, he stated that he was feeling this way because the Lubin people had talked too much. Lubin after to Gray said he could have kept on fighting, he felt like, but his limbs were not cooperating.

It will be a long ride home to Florida.

Jarrett Hurd entered the ring as the younger gun, on radar screens of more of the masses for just two years, and he looked across the Barclays Center ring at Austin Trout, a more seasoned vet who’d been in with A-grade foes.

Fans wondered coming in to this Showtime broadcast TV opener, on a show promoted by Lou DiBella, if the kid would prove too fresh, too strong, for a guy who debuted as a pro in 2005. 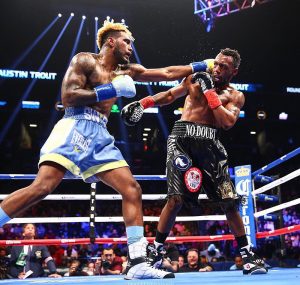 Indeed; too fresh, too strong, legs and fists with too much zest as the fight slid into the later rounds. Trout boxed smart and sharp, but as the rounds progressed, the vet started to get tagged more. The end came in round 10, when Hurd pressed Trout and flurried and threatened a stoppage as Trout was backed in the corner. He went to his stool, and he looked beleaguered. The doctor, erring on the side of caution, proposed a halt. Youth triumphed over a valiant vet who couldn’t sustain the smart boxing the whole route, especially since his power was not comparable. Hurd your winner, by TKO.

Hurd, holding the IBF junior middleweight title, had snagged it when he met and bettered Tony Harrison, with the strap vacated, in February. The Marylander came in at 20-0 with 14 KOs, and weighing 153.6.

Trout had told people this week that he wanted to negate the judges’ effect, and look smart but hard to KO Hurd.

Hurd, some had noticed, looked noticeably bigger than Trout when put side to side.

In the first, the lefty Trout came out active, body jabbing. Hurd, with the low left, dipped right and feinted.

In the second, Trout again started fast. His body work was clearly a theme. Backing up, the NM boxer was effective. He got angles and Hurd plodded a bit after him.

In round three, the action was sharp. Hurd closed the gap better and his hands were stickier, connecting more. His jab popped Trout’s head a few times. The older man’s movement was less effective and Hurd told him that with sharp launches.

In the fourth, Trout made Hurd miss, with his legs. His potshots had the crowd ahhing. They traded and in center ring, sweat sprayed.

In the fifth, Trout was all about moving and Hurd about following. Hurd’s reach was speaking more. But then his hands slowed and Trout popped him and slid away and then darted in and scored.

In the sixth, Hurd just wanted to touch Trout. His hands didn’t look fast but he was landing some. “Keep circling,” a Trout friend or family member yelled, again and again, smartly. Trout uppercuts had the crowd impressed. A right hurt trout and he buckled. He stayed up and maybe the round was even.

In round seven, we saw blood on the left eye of Hurd. He dropped and hands in response, and Trout pumped lefts and rights in return. Trout then stumbled, off right hands. Hurd stalked, bleeding, looking maniacal and fearsome. The action was hot, heavy and pretty even.

In the eighth, we saw that Trout was getting tagged clean. His legs were too heavy and his hands not heavy enough. But he persisted. He threw, flurried, looked beat, hurled the jab, got a breath, continued. And he probably took the round.

In round nine, Trout was moving better and Hurd again plodding early. Swelling on Trout’s right eye wasn’t deterring his plan. Would his legs cooperate the whole nine (12)?

In Round 10, Trout had bounce to start, a third wind. Short rights from Hurd worked. The Trout eye was worse. But Hurd didn’t target it. Then he did, Trout looked battered. And his corner admitted as much, the towel was thrown in before the start of 11.