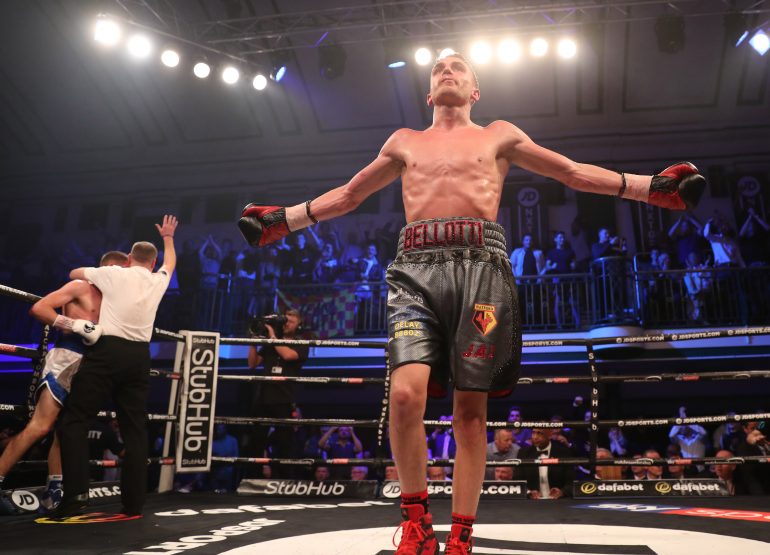 Acclaimed British coach Jim McDonnell waxed lyrical about Reece Bellotti during a recent conversation with RingTV.com and now we know why.

In only his eleventh professional outing, Bellotti halted the vastly more experienced Jason Cunningham in six rounds to claim the Commonwealth featherweight championship at the York Hall arena in London on Friday.

The bout was fiercely competitive until a bloodied Bellotti (11-0, 10 knockouts) floored southpaw Cunningham with a terrific right hook in Round 5. The champion survived the session, but it was a heavy knockdown and Bellotti smelled blood.

Another right hook rocked Cunningham (23-4, 6 KOs) early in the sixth and a series of brutal head shots forced referee Robert Williams to intervene. The official time was 0:30.

“We knew it was going to be a tough test and it was a great fight,” said Bellotti in his post-fight interview with Sky Sports in the U.K. “My fitness tells in there and we work hard in training. It was my first (scheduled) 12-rounder, so I was at the next level. We were prepared for it.

“I like a good fight. I like to put on a show for the fans and that’s what we gave them tonight.”

For a fighter who is still essentially a novice professional, this was a strong performance. If there’s one complaint, however, it would be that Bellotti was too easy to find. He suffocated Cunningham with pressure but was caught on several occasions while closing the distance. Sooner or later, you’ll encounter someone who will make you pay heavily for those mistakes.

The good news is that with Jim McDonnell in his corner, Bellotti will continue to improve in all areas.

“Reece was in awesome shape and he had to be because he was in there with a tremendous fighter,” said McDonnell. “He was so relaxed about doing his first 12-rounder, it was amazing. Most fighters are a bit jittery, but you see the pace he set.

“The sky’s the limit for this kid.”