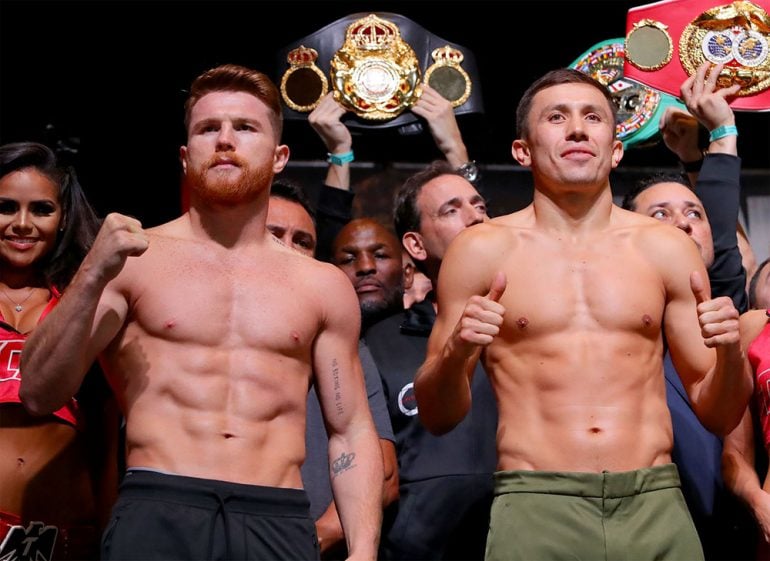 Many observers had different scorecards on the recent Canelo Alvarez-Gennady Golovkin THE RING Magazine middleweight championship battle. Some liked Canelo; some sided with Golovkin. It was the kind of fight that was decidedly subjective: Did you prefer Golovkin’s volume or Canelo’s greater accuracy? It was a good fight and the draw keeps things well poised ahead of a return next May.

The longest reigning middleweight champion in history, Bernard Hopkins, a partner at Golden Boy Promotions, which promotes Canelo, believes his fighter did enough to edge the tight battle.

“I scored the fight 7-5 Canelo,” Hopkins told RingTV.com. “I scored the first three for Canelo, then some even rounds in four and five> Between six, seven and eight, I give it to ‘Triple G’ and past the eighth round, there were some pockets where they both exchanged and you’re not sure who to give it to.

“I know one thing, that the fight could have gone either way and I wouldn’t be saying Canelo got robbed because there were some tough rounds in there.”

Hopkins feels his charge has more room to grow as a fighter from this performance.

“If I was to rate Canelo on that fight, I’d give him a 7 out of 10,” he said. “Based on ring generalship, a lot of people called it running; also he has a chin that a lot of people don’t give him credit for, so does Triple G. I think Triple G took more punches than he has in any fight up to now.”

Heading into the fight many people believed it was simply Golovkin’s time. “It was like a wave,” Hopkins explained. “Early on, it was Canelo, boxing beautiful but we knew there was going to be a point in the fight when Triple G would get his bearings.

“(Golovkin’s) not a good guy at cutting off the ring but he’s banking on Canelo getting tired and he was right and then Canelo showed me something: Some young fighters bail out. He continued to push himself down with a quarter tank of gas, going from L.A to Phoenix. You’ve got a quarter tank of gas and you’re trying to get from L.A to Phoenix? (Laughs)

“I’m already preparing in the ninth round, even though Canelo is still running through the landmines with mines of dynamite hidden in the ground and I said, ‘Wait a minute. He can take Triple G’s punch better than Triple G was taking Canelo’s.’ An uppercut and Triple G was staggered in the eighth or ninth round.

“When Canelo gets his cardio right, he was in shape. I’m taking about filling that gas tank to take this road trip from L.A to Phoenix on a full tank now. I saw a guy who got tired in the sixth and seventh and he went 12 and won rounds out of those 12. Now we’re going back to the drawing board. He just needed a gas tank. If he finished the way he started the first three rounds, it would be an easy fight.”

With that in mind, Hopkins believes both fighters will meet in a direct rematch on Cinco de Mayo next year.

“Yes,” he said. “I don’t want Triple G to take another fight and get beat. He’s ready. The reason we got this fight is because I told (Golden Boy President) Eric Gomez and Eric Gomez repeated it to (ESPN’s) Stephen A. Smith, ‘He’s ready,’ I said. ‘What do you mean, Bernard?’ Eric said. ‘Eric, we have to get him before someone gets him.’ Eric said, ‘Yeah?’ I said, ‘Yeah, we’ve got to get Triple G before someone else does. He’s ready now.'”

And next time, Hopkins sees a definitive winner.

“Canelo stops Triple G in a rematch,” he said confidently without pause. “Andre Ward-Sergey Kovalev II all over again. Shocks everybody because he has the fuel to do it. Only thing he has to do is fix his gas tank. When I say, ‘fix it,’ I mean fill it up.”

You can subscribe to the print and digital editions of THE RING Magazine by clicking the banner or here. You can also order the current issue, which is on newsstands, or back issues from our subscribe page. On the cover this month: Mikey Garcia