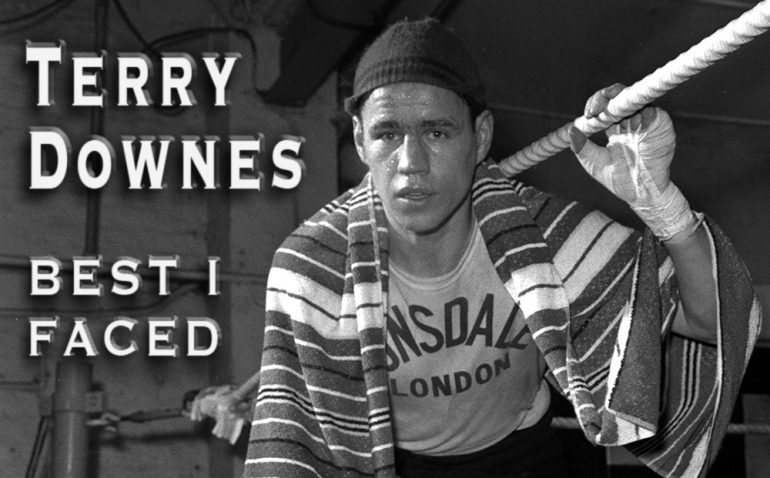 Terry Downes died on October 6 at the age of 81. This “Best I Faced” was originally published in the November 2017 issue of THE RING Magazine.

Terry Downes didn’t have a long professional career but still managed to make a significant impact.

The London native, who fought from 1957 to 1964, was in the thick of the middleweight scene during the final years of Sugar Ray Robinson’s career. Downes’ greatest triumphs were his 10th-round knockout of Paul Pender in July 1961 to win the middleweight championship and a 10-round decision over a 41-year-old Robinson in September 1962.

In all, Downes fought seven times against five world titleholders, going 3-4 in those fights.

Downes grew up in London during World War II but his family moved to the United State when he was 16. He lived there for five years, during which time he spent three years in the U.S. Marines.

He had boxed in England before making the move but also fought as a serviceman. He estimated that he lost around four of 150 amateur fights.

“Out in the States, they were quite impressed by me,” he said recently.

Downes returned to England after his discharge from the Marines, in January 1957, and promptly turned pro. Only three fights into his career, he was matched with a then-unknown fighter named Dick Tiger.

Tiger, a modest 20-8 at the time but loaded with latent talent, was too much for the young Brit, stopping him in five rounds. The U.K.-based Nigerian would go on to win championships at middleweight and light heavyweight and be inducted into the International Boxing Hall of Fame.

In his solemn changing room after the fight, the charismatic Downes was asked who he’d like to fight next. “The bastard who made this match,” he quipped.

The two met three times over the next 15 months, Pender retaining his belt on cuts in Boston, Downes stopping Pender in London in what he described as the proudest moment of his career, and Pender regaining his title on points in Boston.

Downes defeated Robinson in London but acknowledged: “I didn’t beat Sugar Ray, I beat his ghost.”

The Londoner made one more championship run at light heavyweight but was knocked out in 11 rounds by Willie Pastrano in November 1964 in Manchester, England. Downes (35-9, 28 knockouts) never fought again.

“He just caught me with a good punch and hurt me,” Downes said. “I’d been pushing him around and chasing him for 11 rounds. He was a few pounds heavier than me at the time and I’d exhausted myself, and then he hit me with a good shot. I went down, but I wasn’t knocked out. But they decided that was enough.”

Downes built a betting shop (legal betting outlet) empire after his retirement from boxing, owning an estimated 30 shops before selling them off to the William Hill chain. He also appeared in several films, most notably “The Fearless Vampire Killers.”

Downes, now 81, is the oldest surviving British world champion. He and wife Barbara have been married for close to 60 years.

He spoke to THE RING about the best he fought in 10 key categories.

Sugar Ray Robinson: I suppose it could be Pender or Robinson; both were great boxers. The timing – they’re reading you while you’re standing in front of them, their movements drawing you into something. It’s just part of the fight game. I would say Robinson.

Paul Pender: I’ve never thought about it. Pender was awkward; he’d grab hold of you. He was a very awkward bloke. He was … long, skinny. Very classy, but an awkward fighter. They used to call him “The Boston Crab.” He used to grab hold of you whenever you got inside; he was renowned for it.

Robinson: He was such a great fighter. Great timing; timing’s everything. He was just quick. He could probably drop something and catch it before it hit the floor. He had fast hands, fast everything.

Robinson: How can you go against Sugar Ray Robinson and say someone was better than him? The man was amazing.

Dick Tiger: Probably Dick Tiger. He was attacking all the time; it was hard to keep him off. You couldn’t push him back.

Salah Ben Fahrat:I can’t remember, it was that hard! (Laughs.) I fought a bloke at Leighton Baths, an African, he was just a sharp puncher. No one knew much about him and all of a sudden he hit me and I was on the floor. I was up and down two or three times. Every time he hit me, I went down. Gradually I fought my way back and stopped him in the fourth round.

Robinson: You can’t weigh up anything without putting Robinson top of the list. … That was the man. He was a great, great fighter and miles above everybody else in the time he fought. He was good at everything. You can’t take anything away from him.

Robinson: Because he had the ability. He could do everything better than anybody else. It was a mixture of everything. That’s what makes a great fighter, and he had it all.