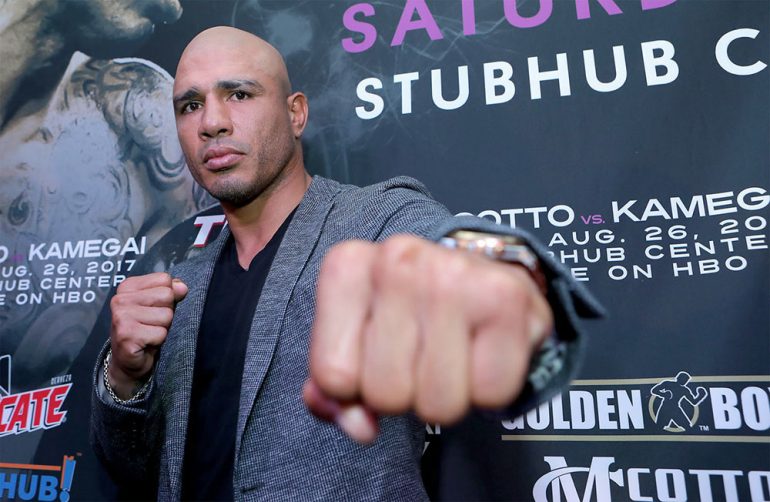 Miguel Cotto said all throughout 2017 that this would be his final year in boxing.

His farewell fight has been set for weeks: December 2 at Madison Square Garden, home of many of his biggest victories.

Just who the opponent would be was trickier to establish.

And in the end, it will be Sadam Ali, the once-beaten welterweight who will move up to 154 pounds for a crack at Cotto (41-5, 33 knockouts) and his WBO title. Golden Boy Promotions president Eric Gomez told RingTV.com on Sunday that the fight is verbally agreed to. On Wednesday, it was made official.

“I’m very excited to be back in the ring for my final fight at The Garden I’ve worked really hard my entire career to be at this level,” Cotto said. “I am fully concentrated on getting together with Freddie Roach so we can work hard and have a great victory on December 2.”

Ali, who was knocked out by Jessie Vargas in his lone fight of significance, wasn’t the first choice of HBO or Golden Boy.

They hoped to match Cotto with middleweight puncher David Lemieux, but according to a source who was not authorized to speak publicly on the talks, Cotto realized in his August return against Yoshihiro Kamegai that 160 pounds simply is no longer an option.

The three other 154-pound champions — Jarrett Hurd, Erislandy Lara and Jermall Charlo — are all unavailable since they fight on Saturday’s Showtime tripleheader.

Other fighters considered who declined offer or were unavailable include Mikey Garcia, Danny Garcia, Lamont Peterson, James Kirkland and Errol Spence Jr. Garcia actually was offered a long-term deal with Golden Boy that would have included a $2 million-plus payday to fight, according to the source.

So it will be Ali, a Brooklynite and Olympian who will be a massive underdog to upend Cotto in the final chapter of the hall of famer’s storied career. Ali (25-1, 14 KOs) has won three straight since the last year’s defeat to Vargas, including a decision over Johan Perez in his last bout.

“I am thrilled to be given the opportunity to fight a legend in Madison Square Garden in front of all my fans and on HBO,” said Ali. “My time is now. God willing, I will leave the Garden with the championship belt.”

Cotto also has shared the ring with Floyd Mayweather Jr., Manny Pacquiao and Canelo Alvarez, but came up short each time.

His career crown jewel might just be a 2014 destruction of Sergio Martinez at MSG to win the WBC, lineal and RING middleweight championship. And now, after 16 years in the pro game, Cotto will wrap it all up and retire at the site of his greatest triumphs.

A 10th fight at MSG, and that will be a wrap for Cotto, who turns 37 later this month.