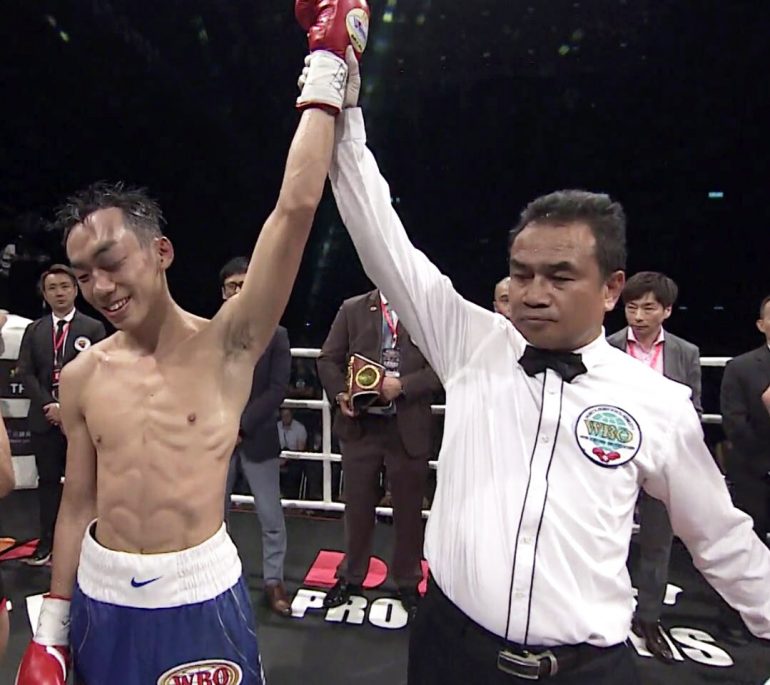 Hong Kong boxer Rex Tso had his hand raised following his first step-up in competition, but it wasn’t the ending his handlers would have wanted.

Tso remained unbeaten after winning a technical decision over former two-time WBA junior bantamweight titleholder Kohei Kono Saturday after the fight was stopped following the sixth round due to a severe swelling on the left side of Tso’s head. All three cards had Tso ahead 68-66, raising his record to 22-0 (13 knockouts), while Kono dips to 33-11-1 (14 KOs).

The swelling was the byproduct of an accidental clash of heads in the second round which immediately caused a goose egg to form. By the following round the hematoma began to resemble the mass which protruded from Hasim Rahman’s head in his 2002 fight against Evander Holyfield. Tso had been boxing a disciplined style prior to the collision, but as his forehead grew he found himself having to exchange with an emboldened Kono.

“Rex did very well and improved during the fight, I am impressed with his performance,” said Jay Lau, who promotes Tso alongside Top Rank. Lau said Tso would undergo an MRI to ensure there was no significant damage from the head clash.

Lau had spoken about having Tso, the No. 2-rated contender by the WBO, face titleholder Naoya Inoue in May, but now says a rematch with Kono might be next for Tso.

Kono, six years the senior of Tso at 36, brought plenty of veteran tricks to the ring as he tried to outmuscle the taller, more slender Tso inside, and targeted Tso’s growing brow with chopping right hands.

Tso regained his boxing form in the fifth, countering and spinning out to center ring to his right. He landed several clean left crosses but was unable to keep Kono off him, and Kono raged back with right hands on the damaged eye. Tso closed the round with his best rally of the fight, unloading two overhand lefts which landed and a sweeping right hook that seemed to daze Kono, to the approval of the approximately 8,000 fans at the sold-out Hong Kong Convention and Exhibition Center.

By the sixth, the swelling had spread to Tso’s left eyelid, further limiting his vision. Kono gave Tso no room to breathe, jumping on the hometown fighter with big punches from both hands. Doctor Rene Bonsubre was summoned to check on Tso’s head with a minute remaining in the round but the fight continued, with Tso landing counters and Kono walking through them to make it rough in close. Kono ended the round with an overhand right which made Tso rub his face.

The fight was stopped moments after the bell to begin the seventh round, which was scored 10-10 on all of the cards.

The fight was broadcast online by the Hong Kong Broadband Network, one of Tso’s many sponsors.