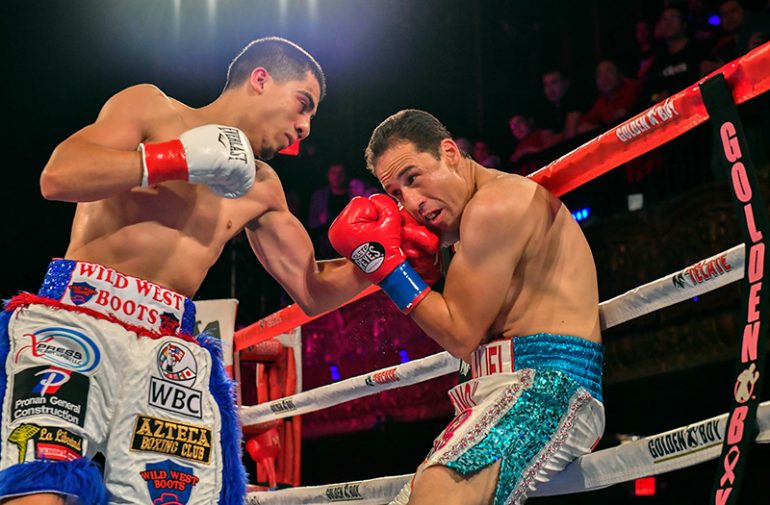 The education of lightweight prospect Christian ‘Chimpa’ Gonzalez continued Friday night. Gonzalez knows what it is like to finish off his opposition, but he gained valuable experience facing a former world titleholder.

Gonzalez dealt with head-butts, holding, and grappling from Gamaliel Diaz to grind out an eight-round unanimous decision at the Belasco Theatre in Los Angeles.

Gonzalez (18-1, 15 knockouts), who will turn 22 years old on Thursday, has now won his last two bouts since his knockout loss to hard-hitting Romero Duno on Mar. 10.

The 36-year-old Diaz (40-18-3, 19 KOs), who held the WBC junior lightweight title about five years ago, has now lost seven of his last eight bouts.

Gonzalez landed the more telling blows throughout the fight, but had to deal with Diaz’s constant holding on the inside. While Diaz would connect with a few punches, inadvertent clashes of heads that were initiated by Diaz led to a cut over Gonzalez’s right eye late in the fight.

During the eighth round, Diaz was deducted a point from referee Jack Reiss for holding and hitting Gonzalez.

Scores were 79-72, 79-72, and 76-75 for Gonzalez, who is  related to former featherweight world titleholder Alejandro ‘Cobrita’ Gonzalez.

Despite the cut suffered in the fight, Gonzalez was glad the fight was over and he was able to get rounds against an experienced foe.

“A win is a win, and this was a difficult fight,” said Gonzalez, who resides in Buena Park, California. “We knew watching the tapes that he’d be a more experienced, slightly dirty fighter. But we weren’t expecting him to be that dirty with all the head-butting and hitting to the back of the head. I want my next fight to be a 10 rounder.”

“I take comfort in one of the judges’ scores because the fight was close,” said Diaz, who resides in Michoacan, Mexico. “Being in the game for so long, I know when I win. It’s always difficult coming into the house of another boxer. Either way, I’m a professional and I will take this loss. This isn’t the first time I’ve been robbed.”

After dropping Cardona (24-9, 16 KOs) twice in the opening round, Valerio ended matters at 21 seconds of the second round.

“I felt good,” said Valerio, who is managed by Joel De La Hoya. “I had an amazing training camp. I was being smart and working smart pays off. What’s next for me? Only God knows.”

In the opening bout of the Golden Boy Promotions card, junior middleweight Ferdinand Kerobyan (6-0, 3 KOs) knocked out Uriel Gonzalez (1-2-1, 1 KO) at 1:08 of the opening round.