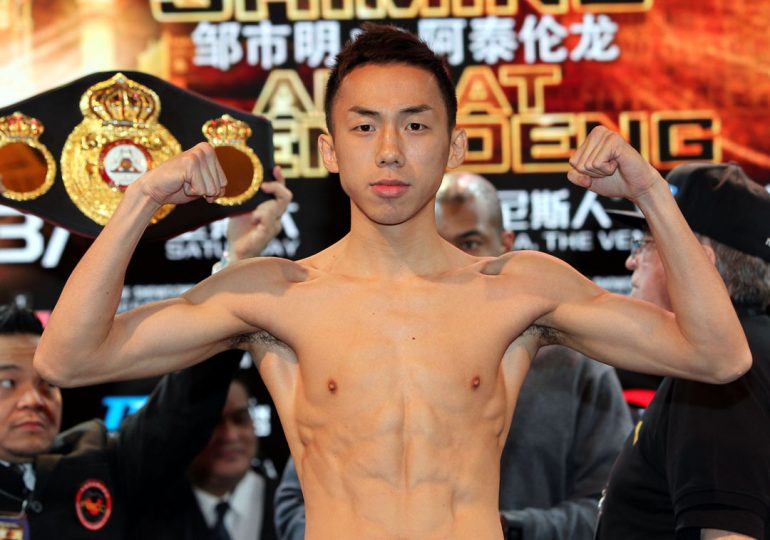 It’s no stretch to call Rex Tso’s upcoming fight the biggest fight of his career, or in the history of Hong Kong itself. That’s because the history of the special administrative region off the southern coast of China is tied in large part to Tso, the first boxer of any note from Hong Kong.

“The Wonder Kid,” now age 30, is no longer a kid, but an undefeated fighter looking to cement himself as a top contender in the hipster haven known as the junior bantamweight division.

Tso will step in the ring with Kohei Kono, a two-time WBA titleholder in the division, this Saturday at the Hong Kong Convention and Exhibition Center in what is expected to determine how much his 21-0 (13 knockouts) record is a reflection of his credentials as a contender.

What’s certain is that boxing is growing in popularity in Hong Kong, and Tso, who has been on all but one of the 10 boxing cards that have taken place in Hong Kong this century, is a big part of that. Two years ago, when DEF Promotions held their first pro event at the venue, there were fewer than 2,000 people in attendance. This Saturday the event is sold out with over 8,000 seats filled.

Tso comes from a family of boxers, with his father and three older brothers having been amateurs. Though he’d been around the sport since the age of 6, he never thought of doing it for a living. Pro boxing didn’t exist in the area, and it wasn’t like he particularly cared for the sport.

“Growing up I really didn’t like boxing because I found it boring and too hard. Everyday it was just learning the same things over and over again, and you get beaten up a lot,” Tso admitted in an email interview.

“I didn’t have any big dreams about my future and what I wanted to do for a living. My only dream at that time was to sit on the sofa all day and play video games.”

It wasn’t until he took a job at DEF Boxing Gym, according to South China Morning Post, that he started getting serious about the sport. The gym is owned by Jay Lau, the businessman who put on the first boxing cards in Hong Kong in 17 years beginning in 2011.

Tso, despite admitting to having a “lazy” disposition, was going to be Lau’s local attraction.

“When he started trying to promote professional boxing in Hong Kong, there weren’t any Hong Kong professionals, so he asked me to fight. He looked past my lazy attitude and believed that I had a lot of potential,” says Tso, who is now trained by Jake Verano, a former pro from the Philippines, and has worked with strength and conditioning coach Ross Earthorne for the past three years.

Rick Staheli, the Philippines-based American who had once upon a time trained Manny Pacquiao, worked with Tso early in his pro career. He was familiar with Tso’s reputation for laziness as a youngster but found him to be serious about his work when he arrived to train.

“His work ethic in the gym reminded me of Manny Pacquiao’s when I trained Manny,” said Staheli, who regularly threw Tso in with more experienced pros during sparring. “He showed a lot of toughness in some very intense sparring sessions in the Philippines, to the surprise of many onlookers in the gym.”

Tso was in the right place at the right time when Top Rank, the American boxing juggernaut run by Bob Arum, made its pivot towards Asia, and the casino scene in Macau, specifically. Tso brought a number of fans across the ferry and received worldwide exposure on eight of those cards at the Venetian Resort, fighting on the same cards as Nonito Donaire, Zou Shiming and the boxer he looks up to most, Manny Pacquiao.

“He showed the whole world that as long as you believe in yourself and work hard to achieve your goals, anything is possible,” said Tso. “I also really like the way he fights because he’s very aggressive and always gets the crowd excited. His aggression is something I try to bring every time I fight.”

Arum, who co-promotes Tso alongside Lau, had spoken about pitting Tso against Kono two years ago when the Japanese fighter was in his second reign as WBA titleholder, but it comes now with Kono (33-10-1, 14 KOs), aged 36, having absorbed two tough losses to Luis Concepcion and Naoya Inoue last year.

But Kono can still bang, and the style matchup between two brawlers for whom defense is an afterthought will make for an entertaining fight for as long as the 12-round scheduled bout lasts. For this camp Tso has sparred with Takuya Watanabe, who fights in the co-feature against Leshan Li, and Filipino upset-specialist Rey Megrino.

“Kohei Kono is an incredible fighter and it’s not going to be an easy task facing him,” Tso levels.

Tso is ranked in the top 15 of all four of the major sanctioning bodies, and is No. 2 with the WBO, whose title is held by Inoue. And should he get past Kono, talk of Tso fighting Inoue next year has been floated in Hong Kong media.

“[The reason] we put Rex to fight Kono is to find out the distance between Rex and Inoue,” said Lau. “We have to speak with Inoue’s manager Mr. [Hideyuki] Ohashi, we may want to fight Inoue in May if Rex can beat Kono. But if Rex loses to Kono, it is no point to fight Inoue.”

But first he must deal with Kono, at last.

“Right now the super flyweight division is filled with a lot of great champions and I feel that a win over Kono will show that I belong on the same level with the best in the division,” says Tso.